A Japanese high court on Friday overturned a lower court decision that dismissed the state's responsibility in the 2011 nuclear crisis, ordering both the government and the crippled Fukushima Daiichi nuclear power plant's operator to pay damages to 43 people who had to evacuate from their hometowns as a result. 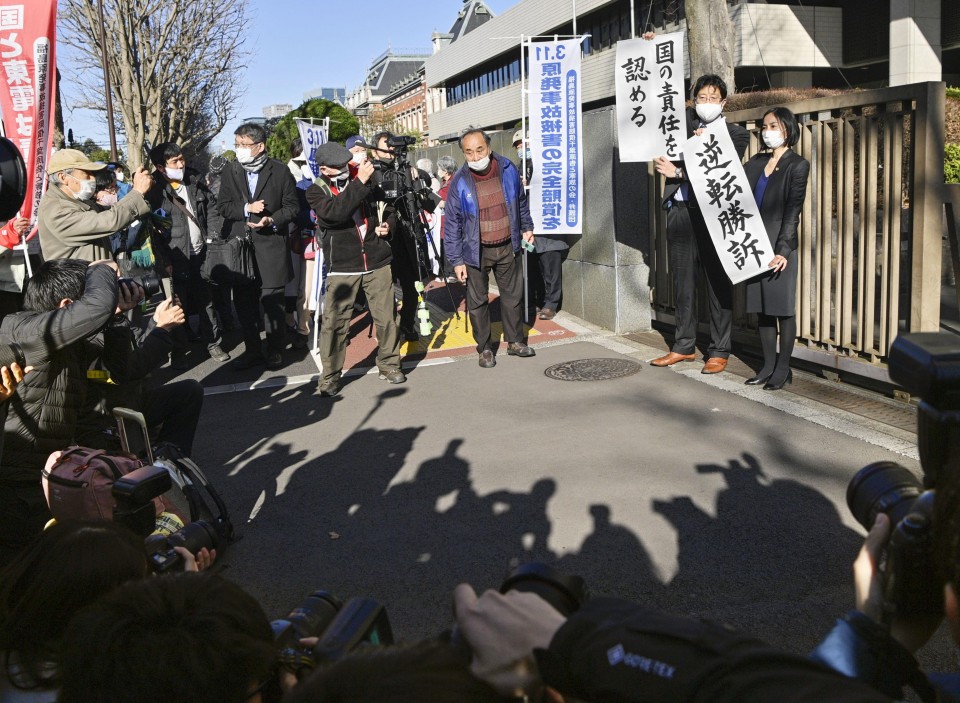 Plaintiffs' lawyers hold banners in front of the Tokyo High Court on Feb. 19, 2021, that say they have won a damages suit against the government and Tokyo Electric Power Company Holdings Inc. over the 2011 Fukushima Daiichi nuclear accident. (Kyodo)

It marked the third high court ruling among 30 similar lawsuits filed across the country, and the second in which both the state and the utility were ordered to pay damages over radioactive contamination following the meltdowns at the plant.

Presiding Judge Yukio Shiraishi said it was "extremely unreasonable" for the government not to use its regulatory power to force the operator widely known as TEPCO to take preventive measures against the tsunami that triggered the world's worst nuclear accident since the 1986 Chernobyl disaster.

If it had done so, "the impact of the tsunami would have been significantly reduced, and the facility would not have lost all power," he said.

The court also ruled that the evacuees should be compensated for their mental distress, in addition to the 100,000 yen per month to be awarded to them as consolation for prolonged evacuation.

In a lawsuit filed with the Chiba District Court, 45 people collectively sought around 2.8 billion yen in damages from the government and the plant operator after they were forced to move from Fukushima Prefecture to Chiba Prefecture, near Tokyo.

In 2017, the district court told TEPCO to pay a total of 376 million yen to 42 of the evacuees, but cleared the state of liability, prompting the plaintiffs to appeal the decision.

The focal point of the lower court case was whether the government and utility were able to foresee the huge tsunami that hit the coastal plant on March 11, 2011, and take preventive measures beforehand based on the government's long-term earthquake assessment that was made public in 2002.

The Chiba court ruled that both the state and TEPCO could have predicted the tsunami, but the accident may have been unavoidable even if preventive steps had been taken.

In contrast with Friday's ruling, the district court ruled the government's failure to exercise regulatory power to force TEPCO to take preventive measures was "not unreasonable."

In January, the Tokyo High Court also deemed the government was not responsible for the nuclear disaster in a suit filed by plaintiffs who evacuated to Gunma Prefecture, eastern Japan, and elsewhere.