FEATURE: Despite pandemic, quake-hit heritage coming back to life in Nepal

When Surendra Malakar started wood carving in his teenage years, it was a matter of pride for his father who couldn't elevate his own skills from basic carpentry.

Malakar comes from Bungamati village in Lalitpur district neighboring Kathmandu. This village and its neighboring Khokana village are renowned for being home to some of the finest wood craftsmen in Nepal. 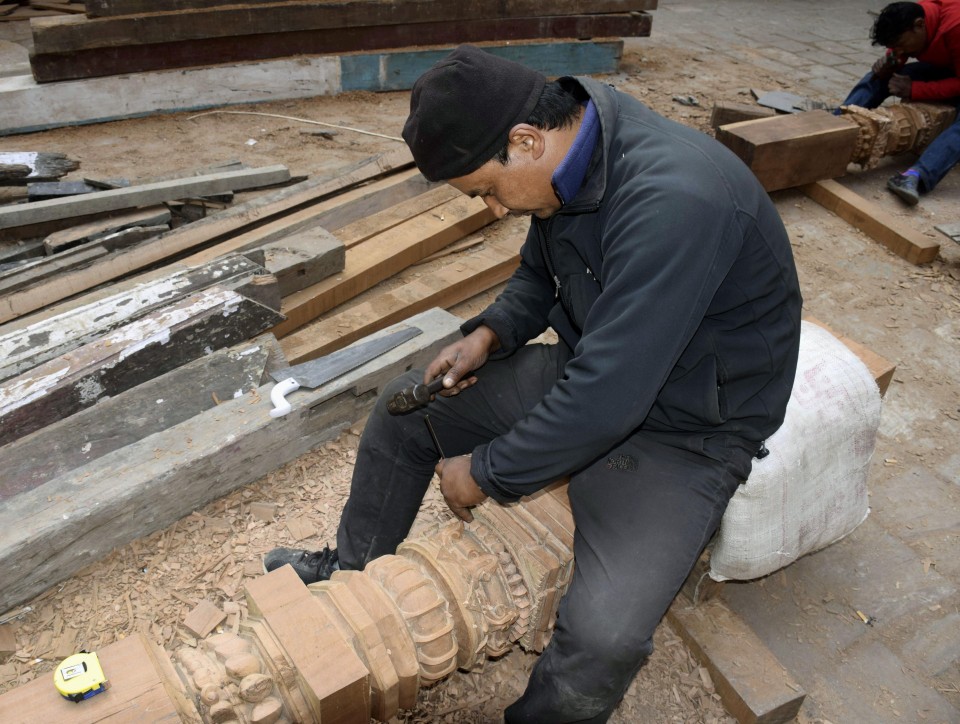 It was, therefore, not surprising that after devastating quakes struck in 2015, officials scouted for skilled craftsmen, sculptors and masons from these two villages to rebuild centuries-old heritage.

The two quakes left nearly 9,000 dead and over a million homes uninhabitable apart from flattening or badly damaging 920 heritage sites, including World Heritage structures, said Damodar Gautam, director general of the Archaeology Department. Of them, 465 have been restored.

Malakar, 35, was among the people selected by Hanumandhoka Durbar Museum Development Committee that has been tasked with restoring a 19th century section of Kathmandu Durbar Square. This section is located between the nine-storied palace, also called Basantapur tower, built in the 18th century, and the Gaudi Baithak, a neoclassical structure built in 1908.

"Being selected to work here was an honor for me and my family. I am now rebuilding a World Heritage site and am contributing to Nepal's tourism," Malakar said.

Before this, he was crafting souvenirs such as photo frames, tiny carved window frames for decoration, wooden replicas of temples and stupas, Buddha statues, and wooden toys such as rhinos and elephants.

Apart from ensuring that the materials used to restore the structures are identical to the original ones, each artistic carving needs to be the exact replica of the wooden structures salvaged from the debris left by the quakes in April and May 2015.

There is an upside though. Malakar has had steady employment here for the past five years.

"Before I started working here, there were times when there was no work for months," he said. 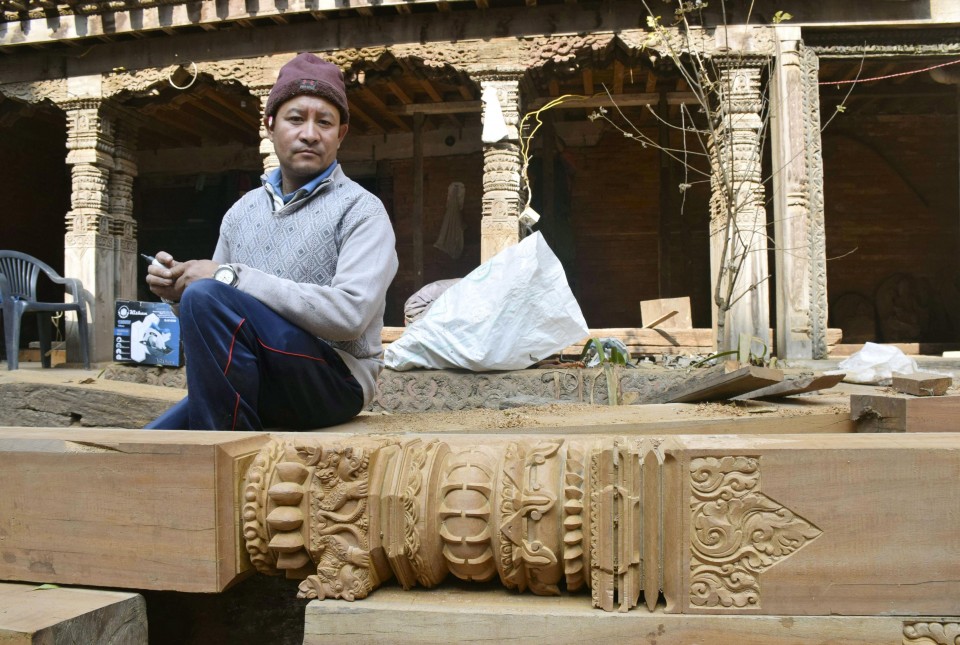 Carvings on a wooden pillar as part of restoration works at the Kathmandu Durbar Square are pictured in December 2020. (Kyodo)

Supplemented by his father's carpentry work and his elder brother's income as a teacher, Malakar's eight-member family is getting by comfortably while tens of thousands of Nepalis are struggling to make ends meet because the coronavirus pandemic has left no sector of the economy untouched, leaving many people jobless.

Sandeep Khanal, executive director of the committee, says the reconstruction work of this section of Kathmandu Durbar Square has provided employment to 50 to 100 people daily, depending on what kind of work is being done. The section, built sometime in the Rana era, is being rebuilt with Nepal's own resources.

Nepal plans to complete the rebuilding project by April 25, 2022.

Ganesh Maharjan, 41, who is another craftsman working at the same site and also has a family of eight, learned the craft at a carpentry factory in his own house in Khokana village.

In Bungamati and Khokana villages, almost every house has a workshop for manufacturing artistic wooden frames used for building private houses. Orders arrive from major cities in the country, including the capital Kathmandu, said Baburaj Desar, 32, who lives in Bungamati village. 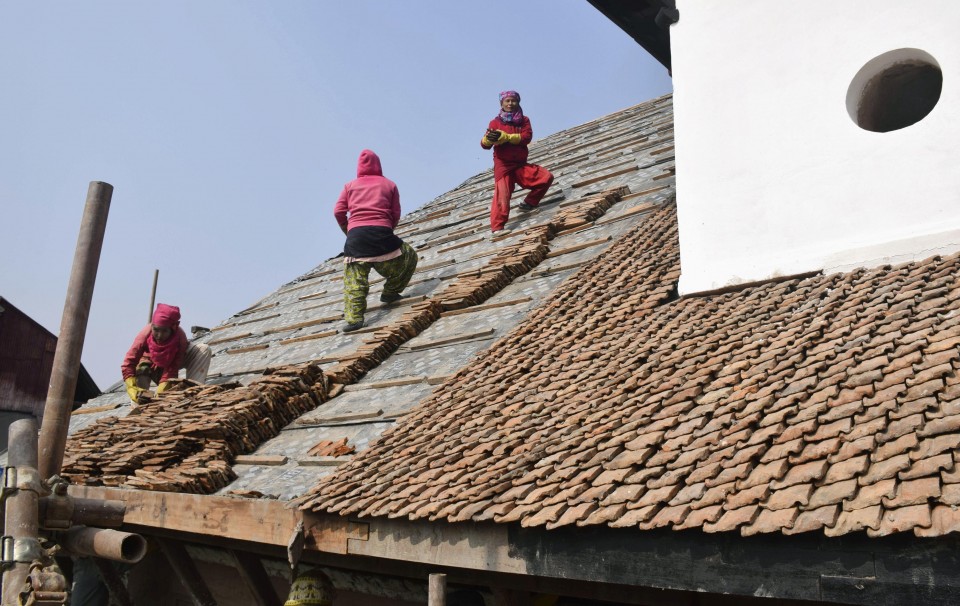 Women take part in restoration work on a rooftop at the Kathmandu Durbar Square in December 2020. (Kyodo)

"It is like our ancestral profession," said Desar who had to lend his hand to the family profession at the age of 10 because of poverty. He is also part of the team that is restoring Kathmandu Durbar Square. "The income is good," he said.

Khanal, the committee's chief, said he aims to complete restoring the structure in six months.

Inside the structure, wooden beams have already lined the ceiling from underneath and pillars with exquisite carvings that have centuries-old cultural meanings are being fitted.

On a sunny afternoon in December, female laborers were already placing tiles, salvaged from the quake debris, on the rooftop.