Emperor Naruhito, on the occasion of his 61st birthday on Tuesday, said he felt thankful for the "perseverance and strength of the people" in Japan in the face of the novel coronavirus pandemic and expressed appreciation for the medical professionals who have toiled through it.

The emperor offered his condolences for the many losses suffered in the past year due to the virus, acknowledging the efforts individuals have made to prevent the further spread of infections, as well as the difficulties and stress brought about by the pandemic.

"I look forward to a bright future after the public overcomes the coronavirus pandemic with patience by cooperating with each other," he said during a press conference held in Tokyo on Friday ahead of his birthday. 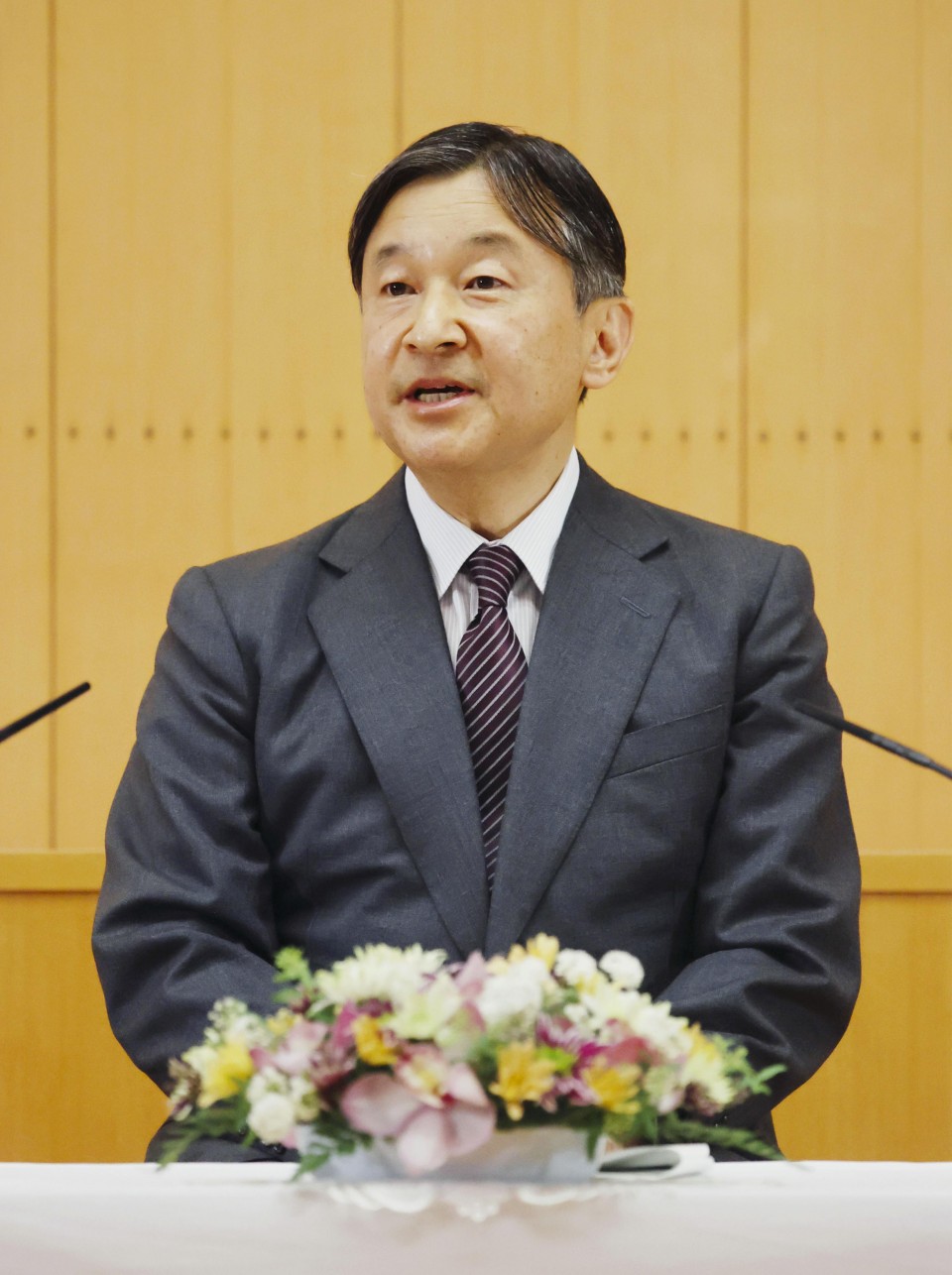 Japanese Emperor Naruhito speaks at a press conference at the Akasaka Palace in Tokyo on Feb. 19, 2021, ahead of his 61st birthday on Feb. 23. (Pool photo)(Kyodo)

Together with Empress Masako, 57, the emperor has interacted with health workers, experts, disaster victims, the elderly and the disabled online. He also encouraged people to support each other amid the pandemic in a New Year video message.

The emperor expressed hope that he will be able to visit the northeastern Tohoku region of Japan, which on March 11 will commemorate the 10th anniversary of a massive earthquake, tsunami and nuclear disaster that killed around 16,000 people and left some 2,500 unaccounted for, mostly in the prefectures of Fukushima, Iwate and Miyagi.

"If I have a chance, I hope to visit the affected areas with the passing of more than 10 years," he said. "I feel that the wounds of people affected by the disaster have not yet healed."

A strong temblor that hit northeastern Japan earlier this month reminded him once again that Japan "needs to think about the Great East Japan Earthquake as a part of the present, and not just the past."

Asked about his niece Princess Mako's planned marriage to her university boyfriend Kei Komuro, which has been delayed following reports of a money dispute involving his mother, the emperor said he hopes for "a situation in which many people are convinced and pleased, as (her father) Crown Prince Fumihito said."

The emperor declined to comment further on issues involving the princess and her boyfriend, both 29.

The crown prince, 55, the emperor's younger brother, said at a press conference in November that he "approves" of his daughter marrying Komuro if the couple are determined to tie the knot, noting that the country's Constitution says marriage shall be based only on the mutual consent of both sexes.

But the prince, who in the past has said that public support is needed before the couple can go ahead with a betrothal ceremony, also said he believes the young couple are "not in a situation where many people are convinced and pleased" about their marriage, and that Princess Mako is aware of this.

Yasuhiko Nishimura, head of the Imperial Household Agency, has urged Komuro to offer the public explanations about the money dispute, which involves money that was spent on his education.

The emperor usually greets the public at the Imperial Palace to celebrate his birthday, but his address was canceled for the second year in a row to help prevent the spread of the virus.

In the press conference, the emperor voiced concern about increases in domestic violence and child abuse cases, alongside the growing suicide rates among women and younger people due to the pandemic.

Regarding his immediate family, the emperor said he would continue to support his wife, who "is still in the process of recovering." The empress, who has long been battling a stress-induced illness, is prone to bouts of exhaustion following major events, he said.

He also talked about his daughter Princess Aiko, a Gakushuin University student who will become an adult member of the family when she turns 20 in December.

"I hope she learns from many people and that the experiences she has broaden her views," the emperor said of his daughter, who is currently attending the university's Department of Japanese Language and Literature.

When asked about his daughter's future marriage plans, the emperor said there will be opportunities to talk about her future, including marriage.

She is the only child of the imperial couple and not an heir to the throne. The 1947 Imperial House Law states that only males in the paternal line can ascend the throne.

Asked about the possibility of female successors amid concerns the imperial household could run out of male heirs, the emperor declined to comment. The Japanese imperial family is now only left with three heirs -- the crown prince, his son Prince Hisahito, 14, and Prince Hitachi, 85, the uncle of the emperor.

Meanwhile, he said it is "unfortunate" that he has fewer opportunities to meet with his 87-year-old father, former Emperor Akihito, who abdicated in 2019, and the crown prince due to the pandemic, but that he communicates with them accordingly.