A raccoon was spotted roaming in central Osaka past midnight earlier this month, in a rare sighting highlighting how measures against the coronavirus have left one of the country's busiest entertainment districts deserted late at night.

The wild animal, photographed by a Kyodo News cameraman, emerged from the shadows in the early hours of Wednesday in a narrow cobbled street around Hozenji temple in Osaka's Minami district. 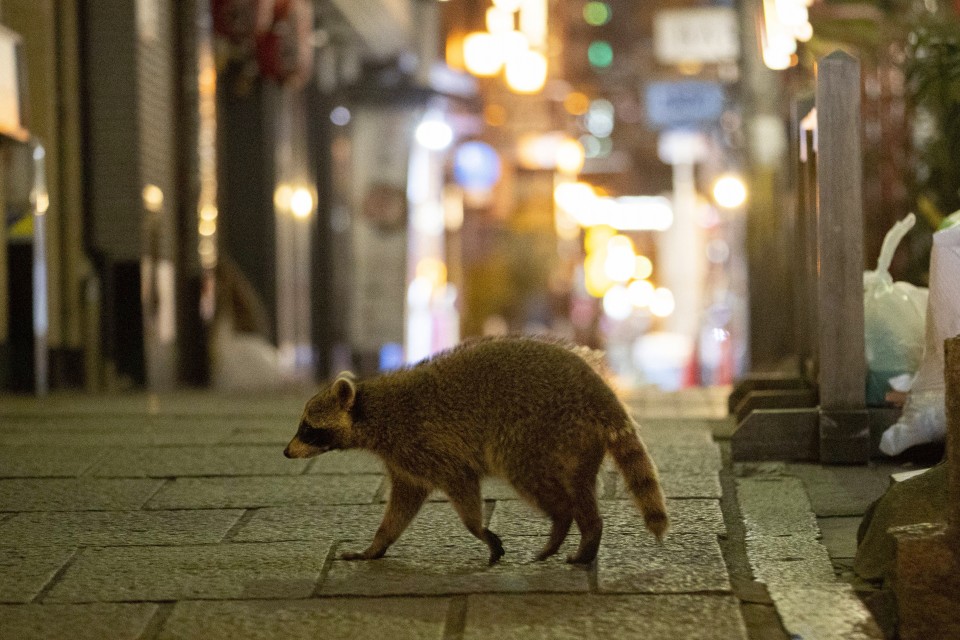 With restaurants and bars that fill the alley mostly closed after 8 p.m. under a state of emergency in force in Osaka since Jan. 8, hardly anyone was about.

The raccoon made a visit to Mizukake Fudoson, a Buddhist statue on the temple grounds that has become a local landmark due to the custom of those making prayers splashing it with water instead of offering donations. As if to remind people of the importance of handwashing amid the pandemic, the unexpected visitor touched the damp, moss-covered statue with its front paw.

The racoon must have taken note of the absence of people, Takeshi Yamamoto, a 44-year-old bar manager who works nearby, remarked wistfully, noting the empty street with posters notifying customers of temporary closure or shortened opening hours.

His bar, which normally stays open until late at night, has closed early since November in line with voluntary guidelines set by the Osaka government, according to Yamamoto.

"This is the area that represents Osaka. I hope things return to normal as soon as possible," he said.

The racoon belongs to a North American species designated by the Environment Ministry as an invasive alien species causing damage to domestic flora and fauna. Originally brought as pets, a population stemming from abandoned animals is now found in many parts of Japan.