Taiwan's top envoy to the United States Hsiao Bi-khim on Tuesday hailed the continuation of U.S. support under the new administration amid increasing pressure from China on the self-ruled island, while calling for "high alert" over Beijing's maritime coercion following the recent enactment of its coast guard law.

In an interview with Kyodo News, the head of the Taipei Economic and Cultural Representative Office in Washington also welcomed the evolving cooperation among four major Indo-Pacific democracies known as the Quad, which includes the United States and Japan, expressing hope that it will help bring "greater stability" to the region. 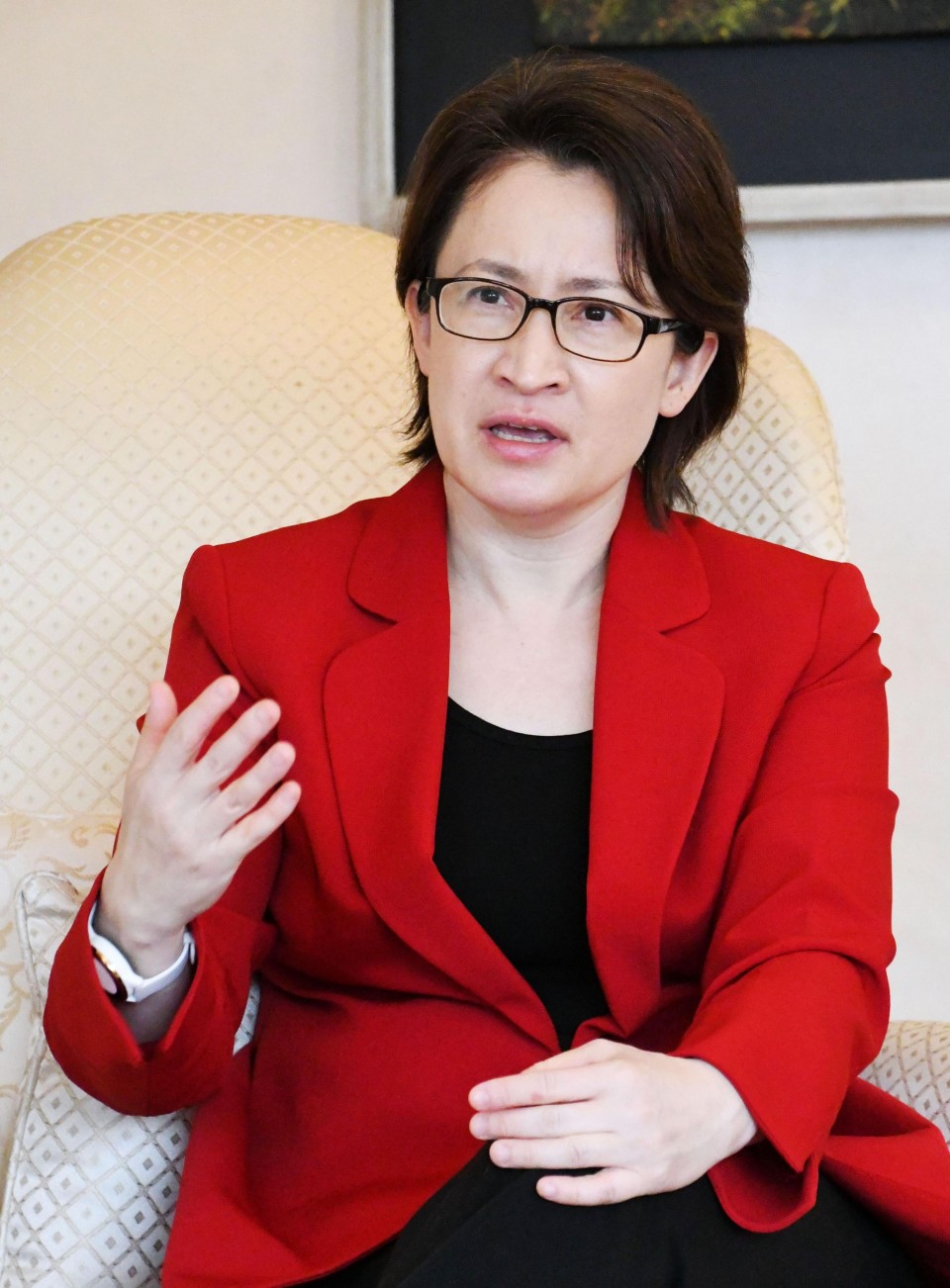 Taiwan's top envoy to the United States Hsiao Bi-khim is pictured during an interview in Washington on Feb. 16, 2021. (Kyodo)

Her remarks come just weeks into the administration of U.S. President Joe Biden, which has swiftly committed to deepening their ties and vowed to continue to assist the island in maintaining a sufficient self-defense capability, even as it upholds a pledge to have only unofficial relations with Taipei.

The administration of Biden's predecessor Donald Trump, which took an increasingly confrontational stance against Beijing toward the end of his presidency, enhanced its support to Taiwan to deter China, such as through the sale of arms including F-16 fighter jets and by sending warships to conduct transits through the Taiwan Strait.

Hsiao said Taipei has worked over the years to ensure that U.S. support for Taiwan is "bipartisan and that there is continuity."

"A number of officials in the new administration have reiterated that support, and we do appreciate that," the de facto Taiwanese ambassador to the United States said, adding, "We are off to a good start."

Hsiao attended Biden's inauguration on Jan. 20 with a direct invitation from the organizers, marking a first since Washington switched its diplomatic recognition from Taipei to Beijing in 1979.

Her predecessors attended presidential inaugurations in the past as guests of Congress members. But an invitation was issued directly to Hsiao for this year's ceremony as attendees were limited amid the coronavirus pandemic and heightened security concerns in the wake of the Capitol riot on Jan. 6, she said.

"I think it's quite meaningful in that they recognized Taiwan as a partner in democracy," she said.

Beijing, which regards Taiwan as a renegade province awaiting reunification, has endeavored to bring the democratic territory into its fold, by force if necessary. Any U.S. moves appearing to be official contact with the island draw ire from China.

Following Beijing's enactment of a new law allowing its coast guard to use weapons against foreign ships, a move that has increased tensions in waters around Taiwan, Hsiao said Taiwan sees China "using multiple tools to expand their presence in the region" and that some of its tools are "aggressive."

"Some of them fall into the category of 'gray zone' operations...which involve a number of coercive efforts, harassments of fishing vessels and others in the region. And of course there are different possibilities for contingencies, and we must remain on high alert," she said.

Concerns are growing in Japan that the new Chinese legislation, which took effect earlier this month, could elevate the risk of military miscalculation around the Japanese-administered Senkaku Islands in the East China Sea, also claimed by Beijing and Taipei.

On the Quad grouping, widely seen as a move to counter China's rise, Hsiao said the initiative represents "a degree of coordination among like-minded stakeholders in the region" and she hopes it will "contribute to greater stability in the region and greater cooperation."

But she noted that the Quad, which also includes Australia and India in the pursuit of a "free and open" Indo-Pacific, is currently "more of an ad hoc arrangement" and that Taiwan is observing "with interest" to see how the structure will evolve in the coming years.

Taiwan also backs a "free and open" Indo-Pacific, marked by the protection of concepts including freedom of navigation, because it is consistent with Taiwan's ultimate goal, which is "the survival of our democracy and of our freedom," the representative said.

On the economic front, Hsiao said Taiwan will continue to garner support over its desire to join a Pacific free trade pact originally known as the Trans-Pacific Partnership.

It was a blow to Taiwan when Trump pulled the United States out of the TPP shortly after taking office in 2017, as the move also meant the withdrawal of a "very important source of possible support for Taiwan" on its participation in the deal, now known as the Comprehensive and Progressive Agreement for Trans-Pacific Partnership.

"It does make our situation complicated, but we will continue to seek the support of other member economies," she said, noting that Taiwan is engaging in informal discussions with countries including Japan on the issue.

Hsiao, born in Japan's western city of Kobe and raised in Taiwan, assumed her current position as Taiwan's representative to the United States in July of last year, becoming the first woman to take on the role.