Prime Minister Yoshihide Suga said Monday that Taro Kono, Japan's administrative reform minister, will lead coronavirus vaccination efforts, as the country grapples with a third wave of the pandemic and concern about strains on the medical system.

Suga, who called vaccines the "decisive factor" against the pandemic, said he wants to roll out COVID-19 vaccinations by late February. 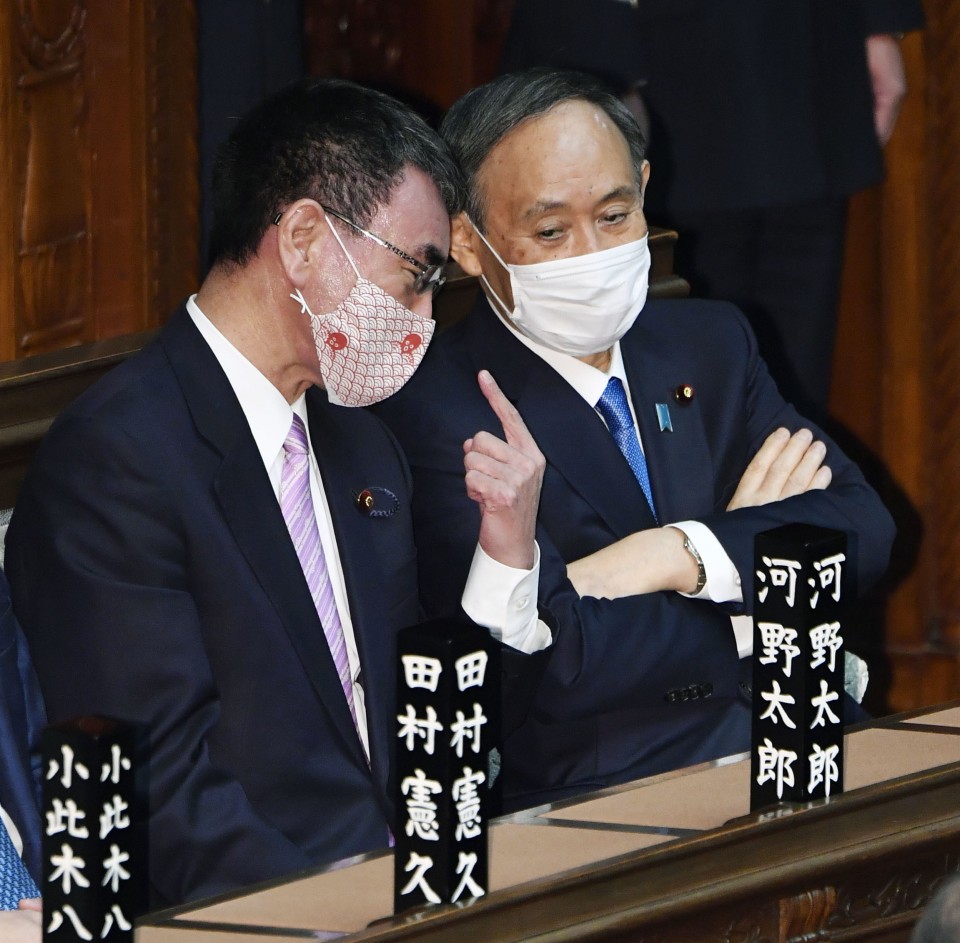 Prime Minister Yoshihide Suga (R) and administrative reform minister Taro Kono talk to each other as they attend a House of Representatives plenary session Jan. 18, 2021. (Kyodo)

The move to tap Kono for this role is to ensure smooth coordination, in his capacity as administrative reform minister, among relevant ministries and agencies, as well as other parties including medical associations, government sources said.

"We must ensure that many people are vaccinated as quickly as possible," Kono told reporters, adding that he wanted to start hearing from the central government ministries and agencies.

In an interview last week with South Korean newspaper JoongAng Ilbo published on its English website Monday, Kono said he did not think the roll-out schedule was too late.

He also said the Olympic Games "will only be possible if vaccination takes place, so we will prepare for this thoroughly."

Japan, as the host of the already postponed games rescheduled for this summer, is eager to implement a successful vaccination campaign.

A Reuters interview last week reporting uncertainty about the games based on Kono's remark gained great media attention in the country. It quoted him as saying the fate of the Olympics "could go either way."

Kono tweeted in Japanese on Monday that it is "normal to consider various responses" to possible scenarios looking at the world's coronavirus situation.

Japan logged over 4,900 daily cases nationwide on Monday, with the health ministry putting the number of serious infections at 973, rising one from the previous day.

The individuals, ranging from their 20s to their 60s and in Shizuoka Prefecture, had not traveled to Britain and did not have any prior contact with people who had recently been to the country, according to the ministry.

"We are currently investigating whether the infection is spreading in the region," Takaji Wakita, the head of the National Institute of Infectious Diseases, told a press conference, noting they would strengthen efforts to track the situation in the central Japanese prefecture.

For Tokyo alone, its latest daily tally stood at 1,204 new coronavirus cases, the metropolitan government said, as the capital entered the 11th day of its second state of emergency.

Tokyo Gov. Yuriko Koike said the same day that subsidies given to small and midsize eateries that comply with the government's request to close by 8 p.m. would be expanded to include restaurant chains to help offset their financial losses.

The subsidy amount is still under discussion but could be the same as the 60,000 yen ($580) per day offered to the small and midsize restaurants and bars with shortened business hours, she told reporters.

Koike added she would like the subsidies to be disbursed as soon as possible to the restaurant chain operators.

The metropolitan government has allowed businesses with capital of less than 50 million yen or those with 50 employees or fewer to receive the subsidies, leading to criticism from large restaurant and bar chains.

Suga declared a monthlong state of emergency on Jan. 7 for Tokyo and three neighboring prefectures, later expanding it to seven other prefectures out of a total of 47 prefectures.

Under the state of emergency, people have been urged to refrain from going outside unnecessarily and restaurants asked to shorten their opening hours.