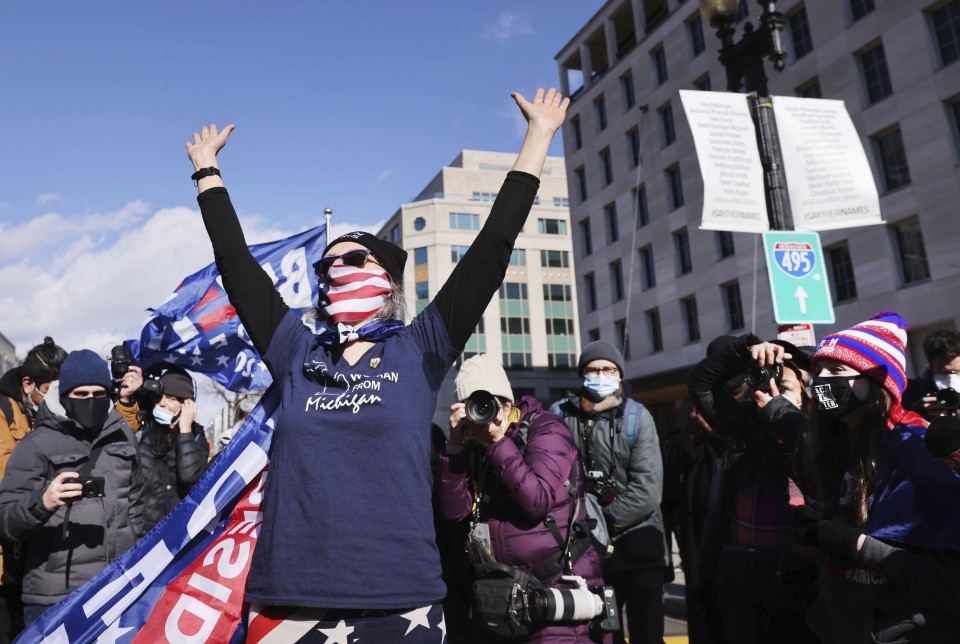 Supporters of President Joe Biden celebrate as they listen to him speak during the presidential inauguration on Jan. 20, 2021 in Washington, DC.  (Getty/Kyodo)

Donald Trump's presidency, which for four years sowed division and disinformation, has come to an end, after culminating in a violent attack on the Capitol by his supporters seeking to block the transfer of power.

But the political division plaguing the country will remain and continue under the new administration of Democratic President Joe Biden, possibly complicating efforts to carry out his domestic and foreign policy agendas.

"The challenge he has of unifying the country, and of getting members of Congress to move with him and each other to start passing legislation is just, it's a titanic challenge," said Michael Cornfield, a political scientist at the George Washington University.

Biden is in an extraordinary situation not just because he is taking the helm during the ongoing coronavirus pandemic and a historic economic setback, but because a sizable number of voters -- possibly millions -- do not view him as the legitimate U.S. leader, believing Republican Trump's baseless claims of widespread election fraud.

Even backlash against the deadly Capitol siege on Jan. 6, in which rioters sought to throw into jeopardy the constitutional process of certifying Biden's win in the November presidential election, has not shaken up the persistent partisan divide.

As the Democratic-led House of Representatives moved to impeach Trump over his role in inciting the riot, only a handful of Republicans broke with Trump and joined the Democrats to rebuke him.

During the debate in the House, many Republicans questioned the meaning of rushing to impeach Trump just days before the end of his term, arguing that doing so would only further divide the American people.

While Trump is no longer in office, the Democrats still want the Senate to hold a trial to convict the 74-year-old and conduct a vote to bar him from ever running for office in the future. 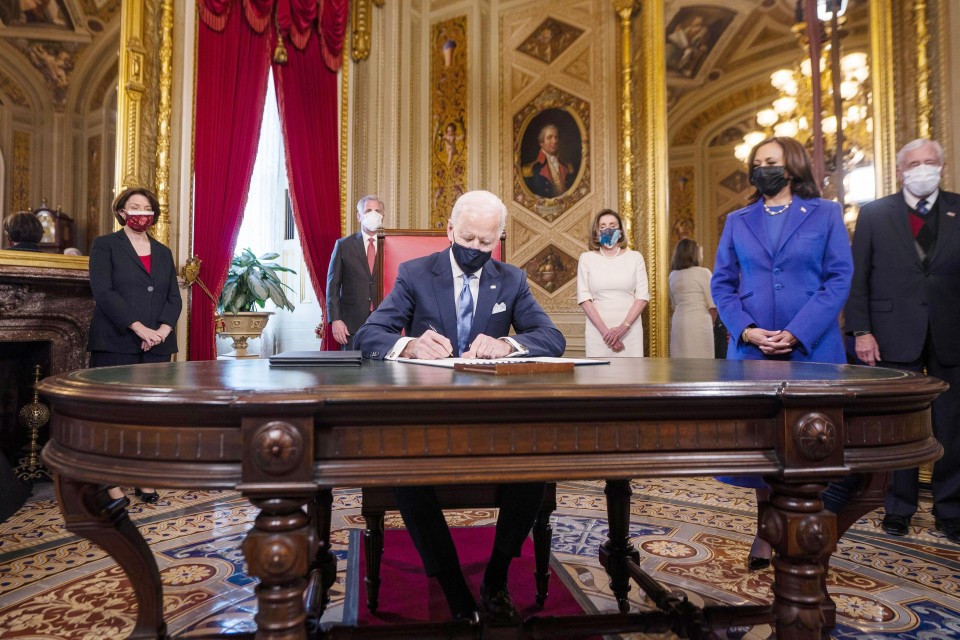 US President Joe Biden signs three documents including an Inauguration declaration, cabinet nominations and sub-cabinet noinations in the Presidents Room at the US Capitol after the inauguration ceremony to making Biden the 46th President of the United States in Washington, DC on Jan. 20, 2021. (UPI/Kyodo)

But the move could put Biden in a bind, as an impeachment trial may consume valuable time at the beginning of his presidency, possibly slowing work on his legislative priorities such as seeking the passage of a massive coronavirus relief package.

An intensifying rift over the fate of Trump could also make it difficult for Biden to seek common ground with Republicans, which would be essential for the new administration to get anything substantial done as the Democrats hold only narrow majorities in both chambers following the 2020 elections.

Yuki Tatsumi, a senior fellow at the Stimson Center, a Washington-based think tank, said the Biden administration may not want to antagonize the Republicans at least during the first 100 days for the sake of his policy agendas, but also cannot just let Trump get away without being held accountable for the riot.

"If this issue drags on and undermines (Biden's) political clout, it could also make it difficult for him to work on his foreign policy agendas, such as climate change issues, even though he has vowed to return to multilateralism," she said.

Consulting firm Eurasia Group forecast in a report issued just days before the Capitol attack that U.S. political division, particularly over the legitimacy of the Biden presidency, would rank highest among the top 10 political risks the world faces in 2021.

The group also warned that, even though the division is a domestic issue, it could affect the country's diplomacy.

"Aside from the shared desire of Republicans and Democrats to punish China...for decades of technological and economic advancement at the expense of America's intellectual property and manufacturing workforce, they disagree sharply -- with each other and among themselves -- over the objectives of U.S. foreign policy," it said.

Biden will try to reassert American leadership in global affairs, but polarization and an inability to manage crises at home such as the coronavirus pandemic will not "inspire as much new confidence as Biden hopes," it added.

According to a survey by Pew Research Center released last week, Republicans and Democrats remained deeply divided as in past polls, with the latest showing a gap in views over Trump's culpability in the Capitol assault as well as the legitimacy of the election result.

A total of 57 percent of Republicans also said Trump should continue to be a major political figure for many years to come.

In addition to healing partisan wounds, the Biden administration will also have to work to restore the country's faltering standing as a leader in international issues and as the standard-bearer of democracy in the wake of the Capitol attack.

"There is a lot of work that America has to do to kind of refashion itself on the world stage as being the oldest and greatest democracy that exists," Lara Brown, director of the Graduate School of Political Management at the George Washington University, told a recent online press conference organized by the New York Foreign Press Center.

But she added that it is "important to note that America's institutions held" even following the chaos at the Capitol, with Congress returning to complete its duty to certify the outcome of the election.

"And I do think America's moral authority will be stronger, in fact, in the wake of this," she said.

(Kylie Sertic contributed to this story.)