There are just six months until the postponed Tokyo Olympics' start on July 23 and the coronavirus pandemic seems to have crushed hopes the event will create a joyous mood in the Japanese capital.

The traditional build-up of expectation is absent due to the ongoing uncertainty caused by the public health crisis, and polling has shown the Japanese public has grown weary of the whole circus, from the cost blow-out to concerns over further virus spread, among other issues. 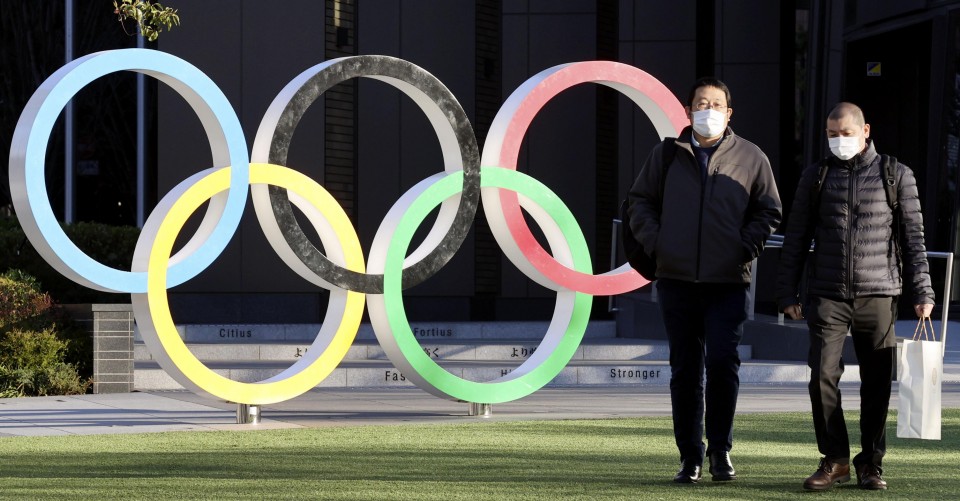 Olympic test events are scheduled to resume in March and the torch relay will start on March 25 in Fukushima Prefecture while the Japanese government will still likely be asking residents to adhere to virus-quelling public health measures such as avoiding crowded social events.

But the organizing committee insists that there is no question of canceling the games, and International Olympic Committee President Thomas Bach reiterated to Kyodo News Thursday that "there is no plan B and this is why we are fully committed to make these games safe and successful."

With Japan scheduled to start its COVID-19 vaccination program by the end of February, Prime Minister Yoshihide Suga has also been unwavering in his determination to hold the games.

Now, with Tokyo's rising coronavirus infection numbers pushing it, and surrounding prefectures, into a second state of emergency, medical experts are questioning the viability of holding an Olympics when a coronavirus vaccine has not been widely administered across the globe.

Masaya Yamato, director of the Infectious Diseases Center at the Osaka-based Rinku General Medical Center, is doubtful the games can be held when infections are high in countries with large Olympic teams like the United States.

He is also concerned about overseas teams traveling to regional areas of Japan as part of the "host town" initiative.

"I worry about the emergence of a new variant (of the coronavirus) spreading rapidly through interactions between athletes and local communities of the team's host towns," Yamato said.

Koji Wada, professor of public health at the International University of Health and Welfare, says it is difficult to reduce the risk of infection in combat sports like judo and wrestling.

"There's only six months to go. Whether athletes are capable of reaching optimal performance, whether a fair competition is possible under the circumstances, these things need to be discussed with the sporting bodies and a decision on the games needs to be made soon."

Yasuhiro Kanatani, professor of clinical pharmacology at Tokai University, says giving athletes access to vaccines, having them take multiple tests and restricting their movement upon arrival in Japan are ways to keep them and the wider Japanese community safe and secure.

But he explains that different vaccines provide different outcomes, and says "it's important to determine in advance which type of vaccine to use" and "stricter control measures will have to be taken" against international visitors, if they are allowed.

IOC chief Bach has been vocal in encouraging athletes to get vaccinated before the Olympics but insisted it would not be an entry requirement for the games.

Bach on Thursday pointed to medical advances that have been made since the decision to postpone, saying it will allow for the games to go ahead safely.

"First of all, let me be clear that you cannot compare March 2021 with March 2020 because there is such great progress in science, medicine, vaccination and tests," he said. "All this was not available in March last year. Nobody knew yet how really to deal with the pandemic, and now we know much more."

Even if, as Bach argues, the games can be held safely, many will still question whether they should.

Earlier this month, IOC official Dick Pound told Sky News in Britain that Olympic athletes should be first in line for a COVID-19 vaccine, raising an ethical dilemma about whether athletes should be prioritized over frontline workers and at-risk people.

He then changed his tune, saying in a recent interview with Kyodo News that "first you have to deal with the people having the highest risk" then "Olympic athletes will be given whatever priority the country thinks is appropriate."

If the Tokyo Games do happen, they are sure to be like no other. For one, it is the first time the Olympics, which have weathered political boycotts and acts of terrorism, are being rescheduled because of a pandemic.

Secondly, despite the IOC's cost-reducing Olympic Agenda 2020, they have become the most expensive Summer Olympics ever, according to a University of Oxford study. The organizers confirmed on Dec. 22 that the cost of the postponed Tokyo Olympics has increased by 22 percent to 1.64 trillion yen ($15.8 billion).

The decision on whether or not to allow crowds into the Olympic venues will likely be made by the end of March. Around 4.48 million tickets for the Olympics and 970,000 for the Paralympics have been sold, and only 18 percent of Japanese ticketholders requested a refund.

The postponement of the games has derailed the training schedules of Japanese athletes like badminton world No. 1 Kenta Momota and karateka Ryo Kiyuna, both of who have tested positive for the coronavirus and are gold medal favorites.

"I will definitely participate in the Olympics and win. I have faith that the games will go ahead," said Abe, who is aiming to win gold on July 25, the same day as his sister Uta, who has qualified at 52 kilograms.

Arrangements are being made for events to be scaled down to minimize risks. Reuters recently reported that the IOC expects only 6,000 athletes to participate in the opening ceremony, roughly half of the normal number of participants.

So all indications thus far are that the show will go on, with big announcements about athlete virus countermeasures and whether international spectators will be permitted to enter the country set to determine just what that show will look like.