Japan's central and local governments as well as many businesses began the year's first day of work Monday facing the challenge of dealing with the continued spread of the novel coronavirus.

With Tokyo reporting over 1,300 daily cases last Thursday, the highest figure since the start of the pandemic, the capital's metropolitan government has been tackling surging infections amid deepening concerns over hospital capacity. 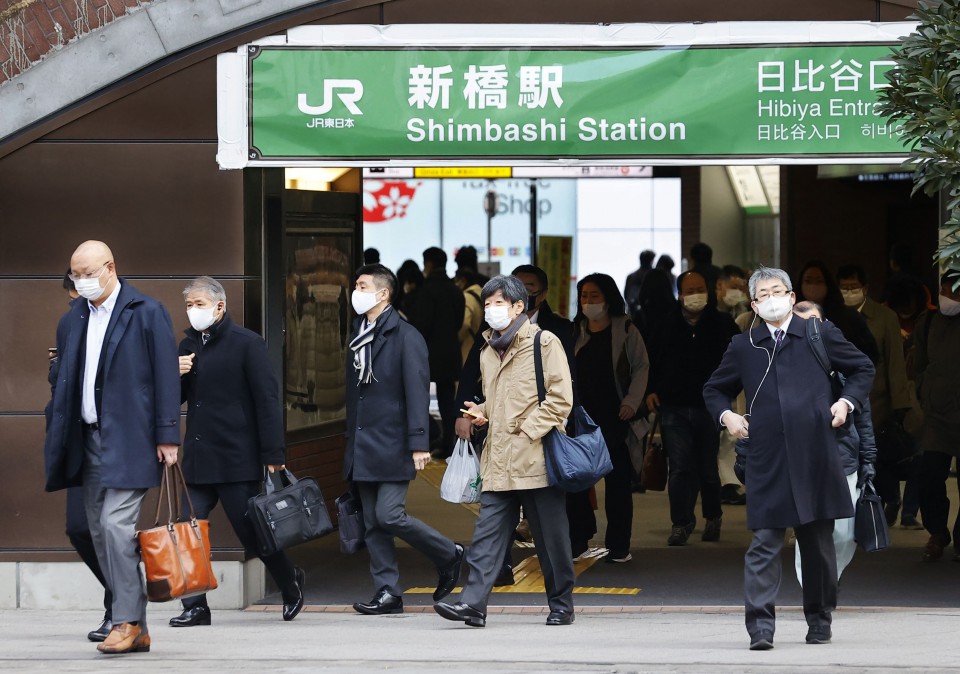 People in front of JR Shimbashi Station in Tokyo head to work in the morning of Jan. 4, 2021. (Kyodo)

"We just have to keep doing what we can at each section," said an official of the Tokyo metropolitan government.

Many officials of the Health, Labor and Welfare Ministry, meanwhile, began work after doing shifts over the year-end and New Year holidays to cope with the increasing coronavirus cases.

"It's become like a long-distance run. We would like to take necessary measures without becoming out of breath," said a senior official of the ministry.

With Monday marking 200 days to go until the planned opening of the rescheduled Tokyo Games, an official of the Tokyo Olympic and Paralympic organizing committee said, "We just have to continue giving our best and believe the tide will turn in our favor."

In northeastern Japan, which is due to mark this year the 10th anniversary of the March 2011 earthquake-tsunami and nuclear disasters, local governments are looking to accelerate recovery efforts.

Municipal officials of Futaba town in Fukushima Prefecture, which hosts part of Tokyo Electric Power Co.'s crippled Fukushima Daiichi nuclear power plant, began the first day of work in Iwaki city, where the town office was evacuated after the disaster.

At a ceremony to kick off work in the new year, Futaba Mayor Shiro Izawa expressed hope for further progress in recovery efforts and an end to the pandemic.

In neighboring Miyagi Prefecture's Onagawa town, which was ravaged by the tsunami, Mayor Yoshiaki Suda said in an address to municipal employees, "Learning from experience over the past 10 years, we will overcome hardships as a team."

"We will take complete responsibility for the accident without allowing memories to fade after the 10-year mark," he said.

On Monday morning, Prime Minister Yoshihide Suga told a press conference that the central government is considering declaring another state of emergency in Tokyo and three neighboring prefectures to authorize stricter measures to curb the spread of the virus. He also said vaccinations could begin in late February.