U.S. State Department spokesman Ned Price, in a statement issued shortly after China again flew sent bombers and fighter jets in the vicinity of Taiwan, noted with concern the pattern of ongoing attempts by China "to intimidate its neighbors, including Taiwan." 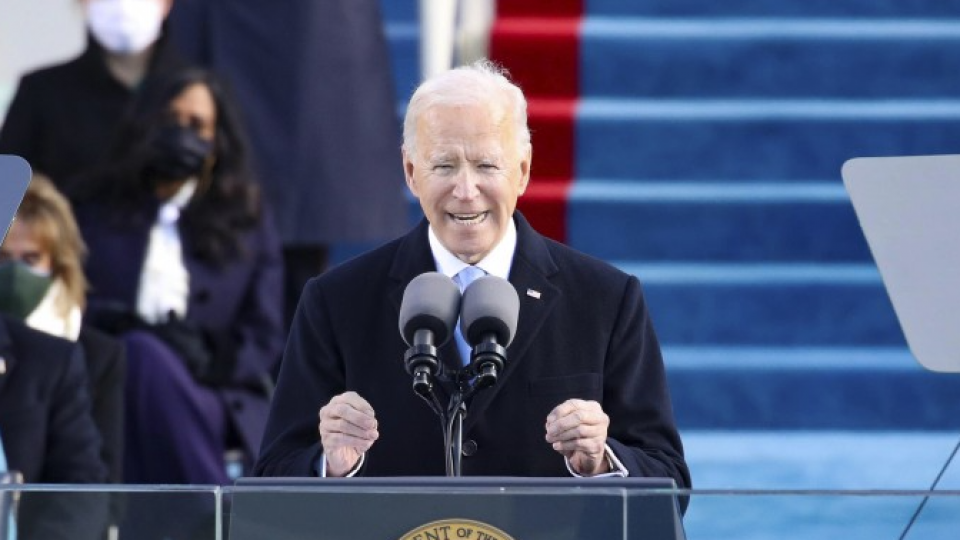 U.S. President Joe Biden delivers his inaugural address at the Capitol in Washington on Jan. 20, 2021. (Getty/Kyodo)

"We urge Beijing to cease its military, diplomatic, and economic pressure against Taiwan and instead engage in meaningful dialogue with Taiwan's democratically elected representatives," Price said.

In a sign that the Biden administration, which was launched on Wednesday, will continue the previous administration's policy of boosting ties with Taiwan, the spokesman said, "We will stand with friends and allies to advance our shared prosperity, security, and values in the Indo-Pacific region -- and that includes deepening our ties with democratic Taiwan."

"We will continue to assist Taiwan in maintaining a sufficient self-defense capability. Our commitment to Taiwan is rock-solid and contributes to the maintenance of peace and stability across the Taiwan Strait and within the region," he said.

His remarks are likely to draw the ire of China, which on Sunday flew a total of 15 military aircraft, including fighter jets, into Taiwan's air defense identification zone, intruding for the 20th day so far this month.

As on Saturday, when 13 aircraft were involved, they flew in between the southern part of Taiwan and the Taiwan-controlled Pratas Islands in the South China Sea.

Antony Blinken, Biden's pick to head the State Department, said Tuesday that there is "a strong and long bipartisan commitment to Taiwan" and that part of that "is making sure that Taiwan has the ability to defend itself against aggression."

"And that is a commitment that will absolutely endure in the Biden administration. We will make sure that Taiwan has the ability to do that," Blinken said during the confirmation hearing of the Senate Foreign Relations Committee.

Taiwan's Foreign Ministry on Sunday expressed its gratitude for the latest statement of support from the Biden administration, with its emphasis on Taiwan's defense.

Former President Donald Trump's administration promoted the sale of weapons to support Taiwan under the Taiwan Relations Act, passed by the U.S. Congress in 1979 when Washington switched its diplomatic recognition from Taipei to Beijing.

The Trump administration also took a series of other steps to draw closer to Taiwan in defiance of China, which regards the self-ruled island as a renegade province awaiting unification, by force if necessary.

One of them, taken earlier this month, was the lifting of restrictions on contact between American and Taiwanese officials.

Taiwan's representative in the United States was officially invited to Biden's inauguration ceremony on Wednesday, in another sign that his administration's policies will not differ sharply from those of Trump with regard to China and Taiwan.

Meanwhile, the U.S. Indo-Pacific Command, in a statement, said an aircraft carrier and other U.S. Navy ships entered the South China Sea on Saturday to conduct "maritime security operations."

Rear Adm. Doug Verissimo, commander of the Theodore Roosevelt Carrier Strike Group, was quoted as saying, "It's great to be in the South China Sea again, conducting routine operations, promoting freedom of the seas, and reassuring allies and partners."

China opposes U.S. naval ships and planes passing near islands it controls in the South China Sea, where its sweeping claims overlap those of Vietnam, the Philippines, Malaysia, Brunei and Taiwan.