South Korea on Saturday reacted to a court order for Japan to compensate former "comfort women" over their treatment in Japanese military brothels by vowing to seek an "amicable solution" and "make every effort to continue constructive and future-oriented cooperation" with its neighbor.

The Foreign Ministry, in a statement, acknowledged that a 2015 bilateral agreement on settling the comfort women issue was an official one, and thus South Korea "has a policy not to make any additional claims against Japan at the government level." 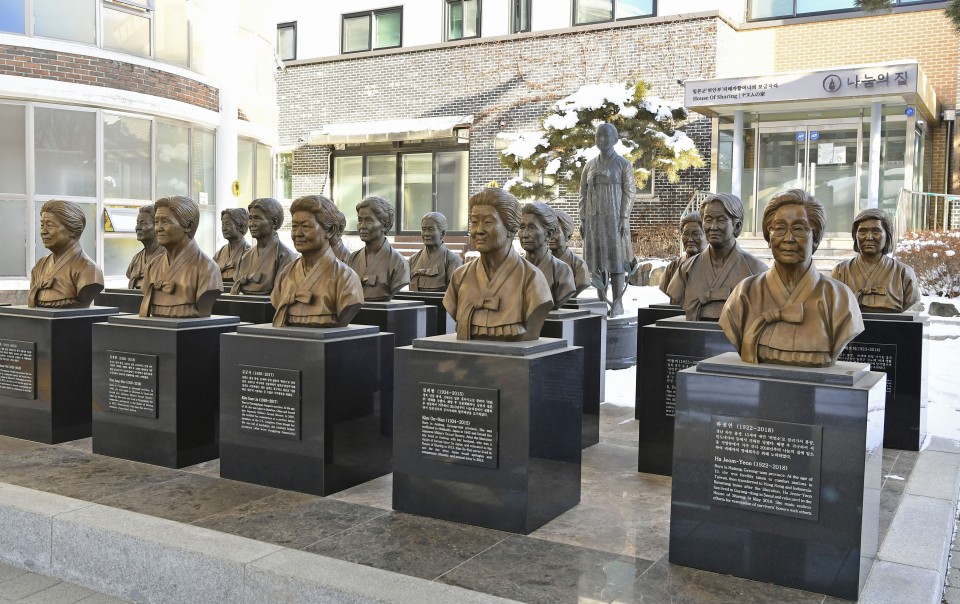 Busts of women are pictured on Jan. 8, 2021, in front of the "House of Sharing," a group home on the outskirts of Seoul for Korean women who were forced into wartime Japanese military brothels. (Kyodo)

But it said Seoul has neither the right nor the authority to prevent the victims themselves from raising concerns, adding that "the real problem cannot be solved only by agreements between the governments that do not reflect the intentions of the victims."

Japan, meanwhile, should make "a genuine effort to restore the victims' honor and dignity, and heal wounds," it said.

"It is extremely regrettable and utterly unacceptable," Motegi said in a statement.

"Japan again strongly urges South Korea to immediately take appropriate measures to correct this state in violation of international law under its responsibility as a state," he said.

It also granted a provisional execution of the compensation order, making it possible to immediately seize Japanese government assets.

Japan has said the lawsuit should be rejected on the grounds of sovereign immunity -- a principle under international law that allows a state to be shielded against the jurisdiction of foreign courts.

It also asserts the ruling goes against a bilateral agreement that settled all claims related to Japan's 1910-1945 colonial rule of the Korean Peninsula and a 2015 agreement the two governments struck to "finally and irreversibly" resolve the comfort women issue.

Under the 2015 deal, the Japanese government paid 1 billion yen ($9.63 million), and the money was distributed through a foundation to former comfort women and the families of those who died.

However, the foundation was dissolved in 2019 after the administration of South Korean President Moon Jae In concluded that the deal, reached under a previous government, failed to properly reflect the women's wishes. Some 5.7 billion won remains unused.

In a bid to improve bilateral ties, already at a historic low over another dispute on wartime labor, Moon told a press conference Monday he wants to discuss a resolution to the row with Japan.

But Japanese officials have been against the idea of holding talks to find mutual ground, saying it is not Japan's responsibility but up to the South Korean side which broke the international and bilateral agreements to come up with a resolution.

The ruling could worsen bilateral ties, which have sunk to the lowest point in decades following South Korean Supreme Court rulings in 2018 that ordered Japanese companies to compensate groups of South Koreans for forced labor during Japan's 1910-1945 colonial rule of the Korean Peninsula.