A South Korean court ordered the Japanese government on Friday to pay damages to a group of former "comfort women" over their treatment in Japanese military brothels during World War II, marking the first such court ruling in South Korea.

The ruling is certain to further fray bilateral ties already strained over wartime labor compensation and other issues. The Japanese Foreign Ministry immediately summoned the South Korean ambassador and protested the decision as "utterly unacceptable." 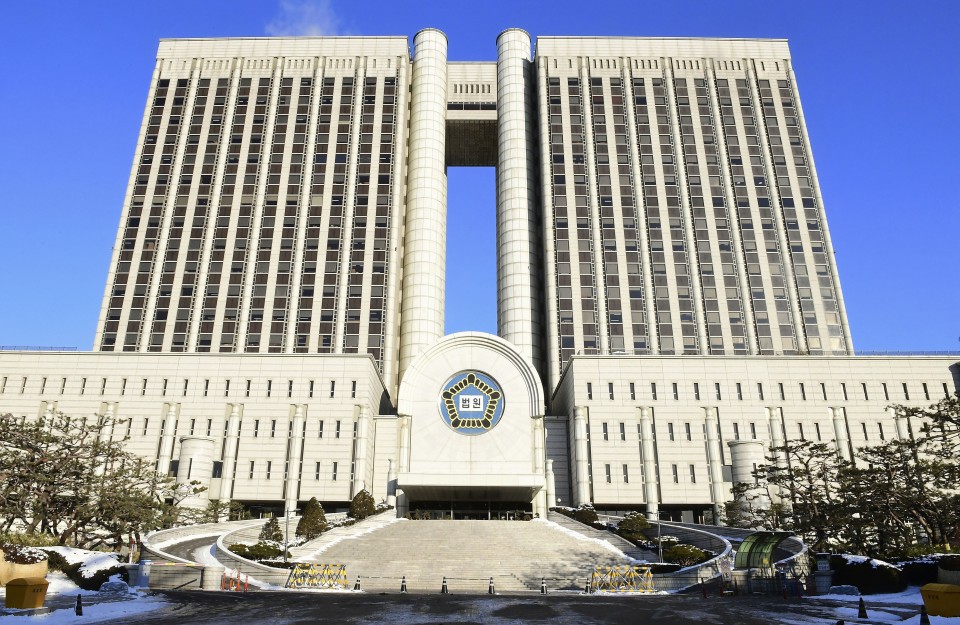 Photo taken Jan 8, 2021, shows the building in which the Seoul Central District Court is located. (Kyodo)

In awarding the 12 plaintiffs 100 million won ($92,000) each as demanded, the Seoul Central District Court also granted a provisional execution of the compensation order. That makes it possible to seize Japanese government assets immediately.

The court brushed aside sovereign immunity -- the concept under international law that the state is immune from the jurisdiction of the court of a foreign country -- saying the Japanese government "violated international norms by committing intentional, systematic and wide-ranging criminal acts against humanity."

The Japanese government has taken the position that the lawsuit should be dismissed on those grounds and declined to be involved in the suit. Top government spokesman Katsunobu Kato said Friday that Japan will not appeal the ruling as doing so would put the country under South Korea's jurisdiction.

South Korea's Foreign Ministry spokesman said in his remarks that the government respects the court's decision and promised that it would do its utmost to restore the plaintiffs' honor and dignity.

He also said that the government would like to reiterate that the deal struck by Seoul and Tokyo in 2015 over the issue of comfort women was an official one, adding that "it would closely review how the ruling would affect foreign ties so that constructive and future-oriented cooperation of the two countries could continue."

As part of the deal, which was signed to "finally and irreversibly" resolve the long-time dispute, the Japanese government paid 1 billion yen. The funds were distributed to former comfort women and the families of those who died. However, some women refused to accept the money, calling instead for an official apology and compensation from Japan.

A South Korean group supporting former comfort women hailed the ruling as "monumental," while a lawyer for the plaintiffs told reporters it was natural to award damages.

"Today's ruling...plays a leading role in confirming that humanity comes first in international law," said Lee Na Young, head of the Korean Council for Justice and Remembrance for the Issues of Military Sexual Slavery by Japan.

The lawyer, Kim Gang Won, said he intends to consult with officials at the group home where some of the plaintiffs live about whether to proceed to take forcible measures such as the seizure of Japanese government assets.

The court also rejected Tokyo's long-standing position that all claims related to its 1910-1945 colonial rule of the Korean Peninsula, including the issue of comfort women, were settled by a 1965 bilateral agreement under which it provided financial aid to Seoul on the understanding that the issue of compensation was resolved "completely and finally."

In the suit, the plaintiffs claimed the manner in which they were compelled to work as comfort women, and treated while they did so, amounted to a "criminal act against humanity," and demanded the court not adopt sovereign immunity for their case.

The plaintiffs consist of both living and dead, including 93-year-old Lee Ok Son who lives with other women at the "House of Sharing," a group home on the outskirts of Seoul for Korean women who were forced into wartime brothels.

In August 2013, the women filed for court mediation seeking 100 million won each in damages from the Japanese government. But after Japan refused to accept the mediation, the case proceeded to a formal trial.

With Japan refusing to accept relevant documents, the court considered papers served through a process known as public notification, and proceeded with the case.

A ruling on a similar case is scheduled at the Seoul court on Wednesday. In that suit, 20 plaintiffs including the bereaved families of some former comfort women are seeking a total of 3 billion won from the Japanese government.

There has been one precedent in Japan in 1998 in which the Japanese government was ordered to pay damages to a group of former comfort women. In the ruling, a district court in Yamaguchi Prefecture said the government must pay 10 plaintiffs 300,000 yen ($2,900) each, but the case was later dismissed in an appeals court.

Japan and South Korea have also been locked in a dispute stemming from 2018 South Korean Supreme Court rulings that ordered Japanese companies to compensate groups of South Koreans for forced labor during Japan's colonial rule.

The dispute could also worsen bilateral ties, which are already at a historic low, with court proceedings under way in South Korea to possibly liquidate Japanese firms' assets to compensate the plaintiffs.