Medical facilities across Japan are struggling to cope with the recent surge in novel coronavirus infections, leaving the medical care system in many areas on the brink of collapse.

With the third wave of COVID-19 cases showing no sign of abating, some hospitals have already been forced to turn patients away or postpone stays, while others are hoping the state of emergency declared Thursday for Tokyo and its neighboring prefectures will reduce numbers in time for them to avoid similar measures. 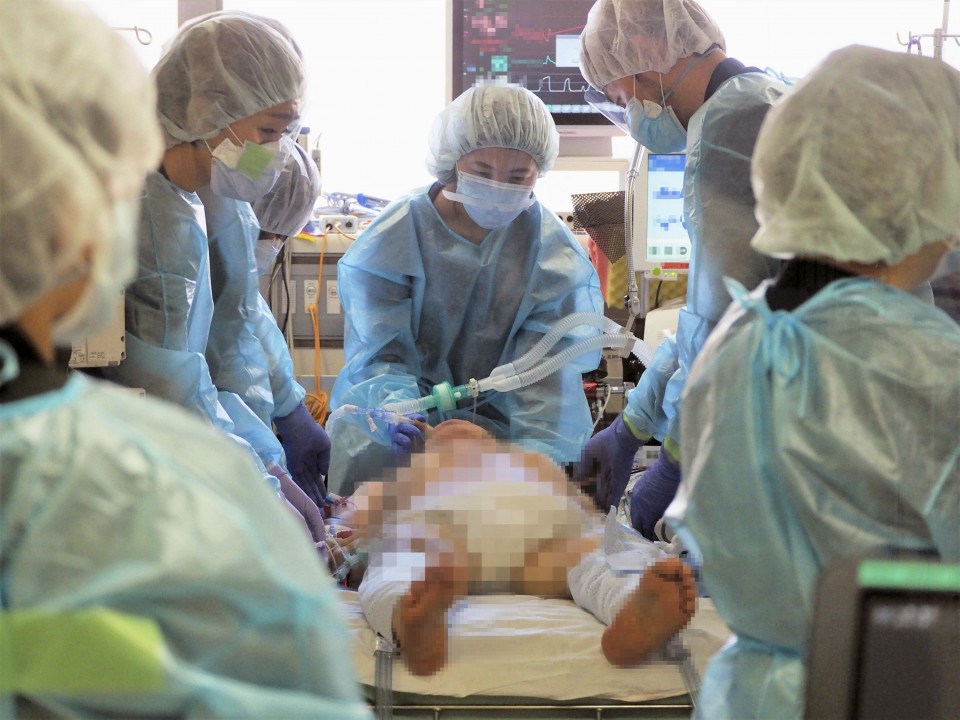 The monthlong emergency was declared by Prime Minister Yoshihide Suga the same day the capital logged a record 2,447 daily cases. Many other parts of Japan are also continuing to report record infections.

A key feature of the emergency measures is a request for restaurants to further shorten operating hours, but Shigeru Omi, head of a government subcommittee on the pandemic, said earlier this week that this would not be enough to "control the current surge."

It would be "no easy feat" to suppress the rise in infections in less than one month, he told a news conference.

Toshio Nakagawa, president of the Japan Medical Association, says the government should look into the possibility of expanding the declaration nationwide depending on how the spread of the virus develops.

Nakagawa also said lawmakers should send a clear message to the public to avoid group dining to lower infection risks, in the wake of Suga himself drawing criticism for ignoring such strictures. Last month he attended a group dinner with people including celebrities and a baseball Hall of Famer, despite asking the public to avoid such events.

As daily infections continue to rise, the number of people in Tokyo unable to secure hospital treatment has been rapidly increasing, topping 3,000 as of the beginning of January. A health ministry official says the situation is becoming "dire."

Meanwhile, 77 percent of the 4,000 available hospital beds for coronavirus cases in the capital had been filled as of Wednesday, while the rate in neighboring Kanagawa Prefecture was 84 percent. In Chiba Prefecture's western region bordering Tokyo it was around 70 percent, and 65 percent in Saitama to the north of the capital.

Although the government is expected to provide financial support to medical facilities that secure more beds for COVID-19 patients, a shortage of doctors and nurses means it is unlikely many hospitals will answer the call.

"There aren't enough doctors or nurses," said Nakagawa. "Even if (hospitals) are told to increase (the number of beds), what can't be done, can't be done."

The occupancy rate of hospital beds for those suffering serious cases in Osaka has been hovering around 70 percent since December, with the western prefecture logging a record 171 such patients earlier this month.

Hospitals have been moving to increase their coronavirus wards, including Osaka City General Hospital, which closed four wings last spring and reassigned doctors and nurses to support medical care for COVID-19 patients.

However, the surge in cases continues to grow and the prefecture has been unable to secure necessary beds. "We don't have any more staff to spare and are barely dealing (with the pandemic). It is even becoming increasingly difficult to accept people in need of emergency care" for other reasons, said Michinori Shirano, the head doctor at Osaka City General Hospital.

The struggle was evident in a recent Kyodo News survey, where nearly half of the surveyed hospitals said they had been postponing surgeries or limiting the number of non-coronavirus related emergency patients.

The questionnaire, which was conducted in early December, contacted 87 hospitals capable of advanced medical treatment, of which 45 answered.

A total 20 facilities answered they were struggling to provide advanced medical care, while more than a half of the surveyed hospitals noted a shortage of nurses capable of attending to COVID-19 patients showing serious symptoms.

Despite the deficiency, 58 percent of the hospitals said they did not plan on increasing capacity for coronavirus patients, due to difficulties in recruiting necessary personnel or the need to focus on non-coronavirus patients. Some also noted that staff were quitting due to anxiety and stress.

Daisuke Kurai, associate professor of infectious diseases at Kyorin University Hospital in Tokyo, said it was becoming increasingly difficult to protect patients and staff from the virus while also conducting consultations.

"The medical care system is already in a state of collapse," he said.