Despite opposition from authorities as well as apathy in society, a hospital president in southwestern Japan is continuing to fight for the right for women with unintended pregnancies to be allowed to give birth anonymously.

Takeshi Hasuda's Jikei Hospital in Kumamoto became in December 2019 the first facility in Japan to offer so-called confidential births. But he has been since told by local authorities twice that it is not clear whether such a system is legally allowed in Japan. 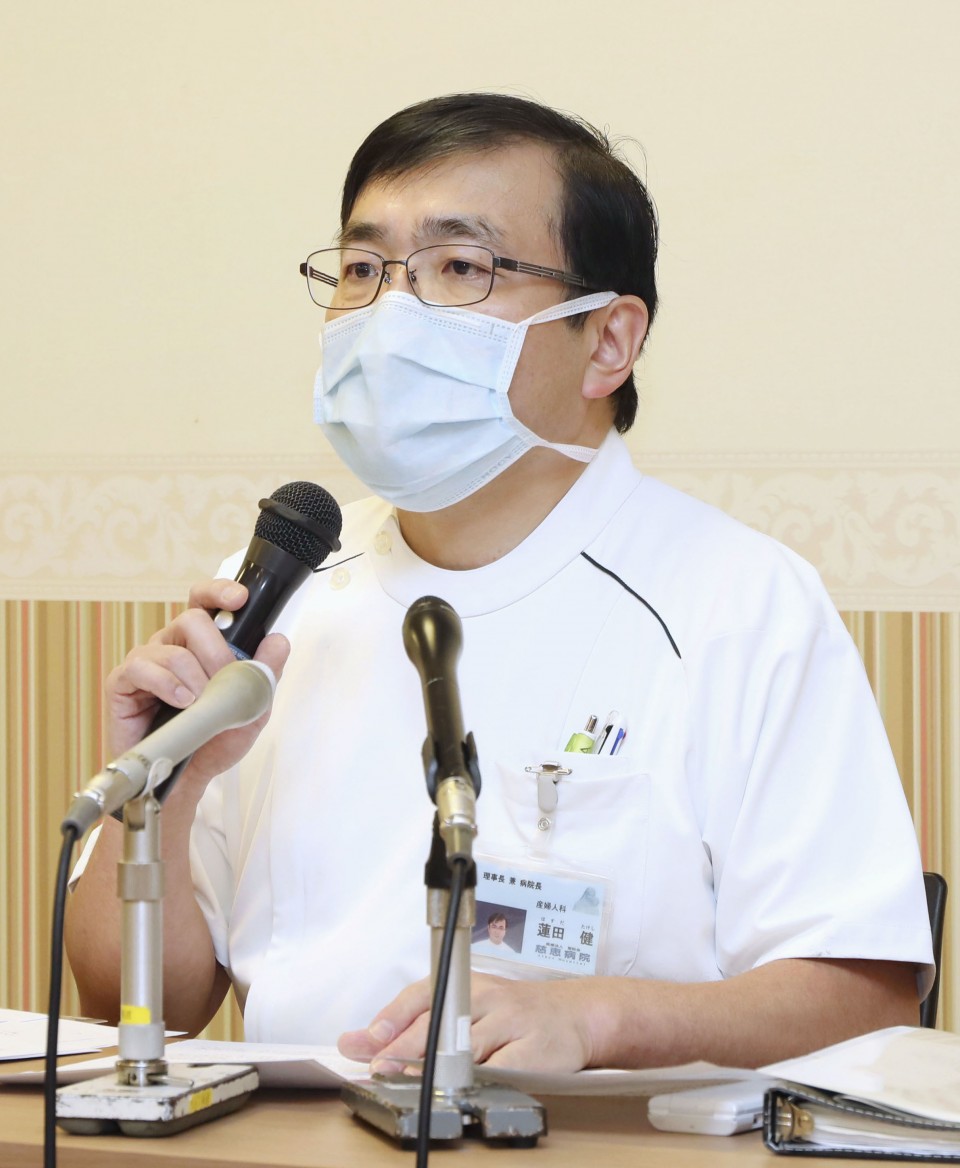 Takeshi Hasuda, obstetrician and president of Jikei Hospital, speaks at a press conference at the hospital in Kumamoto, Japan, on Dec. 15, 2020. (Kyodo)

It is not the first time his hospital has tested the boundaries around how to help women with unintended pregnancies -- Hasuda's father Taiji opened Japan's first baby hatch for unwanted newborns in 2007 when he was running the hospital. Stirring controversy at the time, it remains Japan's only baby hatch.

Despite the official wariness about confidential births, Hasuda intends to continue with the system. "We would like to go ahead with it," he insisted while expressing disappointment at the city government's "reluctance to talk" about the issue.

There have been no confidential births yet, although some women were initially interested before changing their mind after consulting with pregnancy counselors at the hospital.

Hasuda decided to introduce confidential births after facing criticism that the hospital's baby hatch, named "stork cradle," could raise the number of dangerous home births as women use the system to avoid hospitals and keep their pregnancies unknown.

He advocates the adoption of the system Germany legally introduced in 2014 to help women who are unable or unwilling to raise their babies due to difficult life situations, including poverty and pregnancy through rape, and to save their newborn babies.

Under the German system, pregnant women can anonymously give birth at a hospital after revealing their identity only to a pregnancy counselor outside the hospital. The children are allowed to know their mother's identity once they turn 16 years old.

Hasuda plans to allow pregnant women to anonymously deliver their children after notifying their identities only to a pregnancy counselor working at his hospital. The births would then be reported to the Kumamoto city government without the parents' identities provided.

The city government, however, said it doubts whether registration of a child with an anonymous mother can be legally accepted due to a lack of such precedents and related laws.

The hospital installed the baby hatch in 2007 as part of efforts to save babies unwanted by their parents -- or single mothers in most cases.

Controversy swiftly ensued, with then Prime Minister Shinzo Abe from the conservative Liberal Democratic Party saying he "wondered whether it was proper to set up something where babies can be left anonymously."

In the 13 years through this year, a total of 155 babies and infants have been left in the baby hatch, but no other hospitals or organizations have followed Jikei Hospital's lead, except one midwifery home in Kobe in western Japan, which later gave up the idea.

In the meantime, public debate over the confidential birth system and baby hatches has failed to develop, Hasuda and experts say.

Hasuda said in a recent interview with Kyodo News that after visiting Germany, South Africa and South Korea to study their baby hatches, he feels "there is real apathy in Japanese society compared with other countries where we see heated discussions (over unwanted babies)."

He also attributes the central government's reluctance to push moves for confidential birth to the rule of the LDP, which puts a high value on traditional family bonds.

"In Japan, authorities slowly respond to save troubled people only after severe cases or incidents happen," Hasuda added.

Yasunori Kashiwagi, professor at Chiba Keizai College, pointed out that female policymakers in Germany, including those belonging to the conservative Christian Democratic Union, advocated introducing the confidential birth system in a bid to replace baby hatches across the country to prevent home births and protect children's right to know their parents' identity.

"The Japanese parliament, dominated by men, has been less interested in these issues surrounding women and newborn babies in difficult situations," Kashiwagi said, adding that without authorization from the government, Japanese people working for child welfare tend to refrain from bold moves.

In Germany, over 500 confidential deliveries were reported in a four-year period through 2018, according to Kashiwagi. 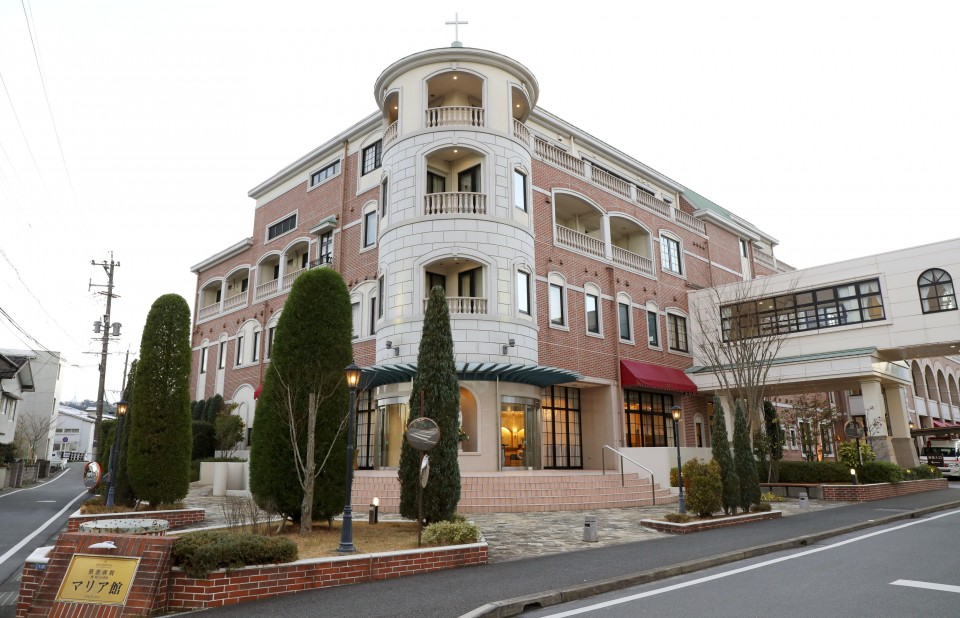 Jikei Hospital, which aims to offer so-called confidential births in Kumamoto, Japan, is shown in this photo dated Dec. 27, 2019. (Kyodo)

Both Hasuda and Kashiwagi voiced concerns over a lack of adequate pregnancy counseling services for troubled women in Japan to easily and anonymously approach, compared to Germany where such services are available even in small towns, they said.

"We need to make every effort to notify women of our offers for women with unwanted pregnancies, otherwise few women would contact us," Hasuda said, adding he is thinking of trying to get his hospital's website listed top in search engines when "unwanted baby" is searched.

Most newborn babies separated from their parents in Japan face a harsh reality. As of the end of March 2019, only 20.5 percent of about 45,000 children without their parents lived with foster parents, with the rest living in orphanage facilities, according to the welfare ministry.

The ratio of such children living with foster parents increased from 10.5 percent in 2009 due partly to the ministry's efforts, but is much lower than rates in other developed countries, it said.

"People do not know much about the plight of such children living without their parents," said Eriko Takahashi, leader of a special team to promote foster parents at the Japan Foundation.

"You can see TV commercials to recruit foster parents in Britain, while you rarely see such posters in Japan. You can be a foster parent even for a short period of time while receiving a subsidy from the government, but people are not well informed about it."