TOKYO - Japan plans to declare a state of emergency in Tokyo and three neighboring prefectures this week, possibly on Thursday at the earliest, and lasting for about one month to curb its largest-yet surge of coronavirus cases, government officials said Monday.

Prime Minister Yoshihide Suga said the government is considering the measure without specifying a start date or duration. It would be the second state of emergency in the country since the global pandemic broke out.

Government sources said the government plans to decide on the declaration possibly on Thursday, and put it into effect on the same day or Friday. The initial start date was being planned for Saturday. 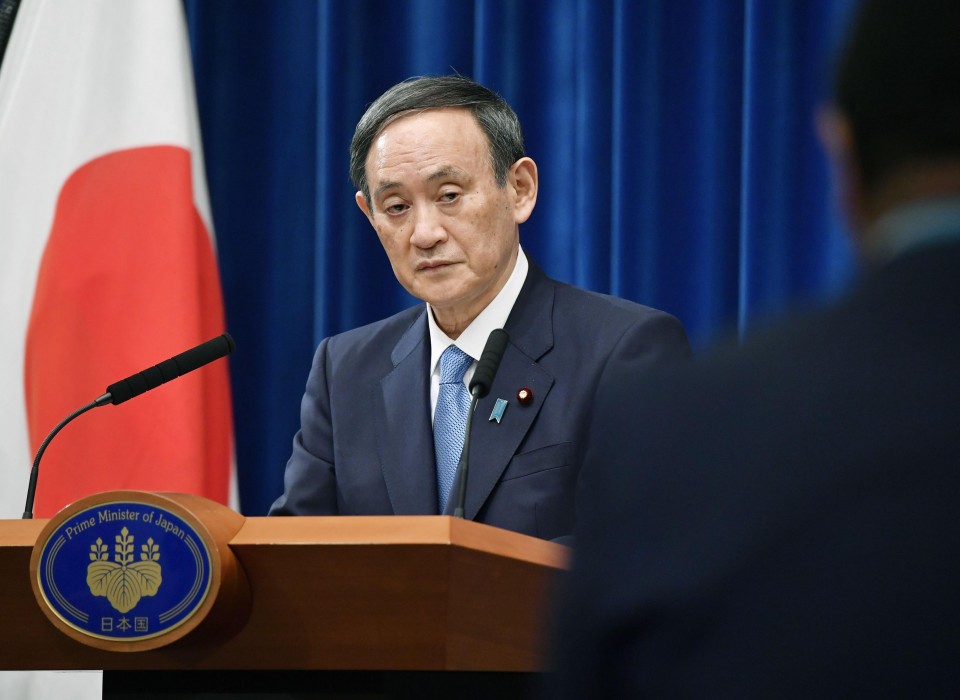 Japanese Prime Minister Yoshihide Suga attends the year's first press conference at his office in Tokyo on Jan. 4, 2021. Suga suggested that Japan may declare another state of emergency in Tokyo and three neighboring prefectures in the near future to curb the spread of the novel coronavirus as infections have kept rising. (Kyodo) ==Kyodo

Tokyo Gov. Yuriko Koike and the leaders of Chiba, Kanagawa and Saitama prefectures agreed to jointly ask residents to refrain from nonessential trips outside the house and call on dining and drinking establishments to close by 8 p.m., further cutting their operating hours from the 10 p.m. currently requested.

It was not immediately clear what another state of emergency would look like, with schools and some businesses closing during the previous one last spring.

Suga indicated in a New Year's press conference that social and economic activities are unlikely to be halted across the board this time, saying the measure should be implemented "in a limited and focused manner."

"It is a fact that the number of people infected with the novel coronavirus has not declined but remained high in Tokyo and the three adjacent prefectures," Suga said at the prime minister's office.

"Taking this seriously, we thought we need to issue a stronger message," he said.

The governors in the metropolitan area, which has accounted for about half of the nationwide coronavirus cases in recent weeks, on Saturday urged the central government to issue a second emergency declaration, days after the capital reported more than 1,300 new coronavirus cases in a single day for the first time.

Suga said the government will seek to begin vaccinations against COVID-19, the respiratory illness caused by the virus, by late February starting with front-line health care workers. 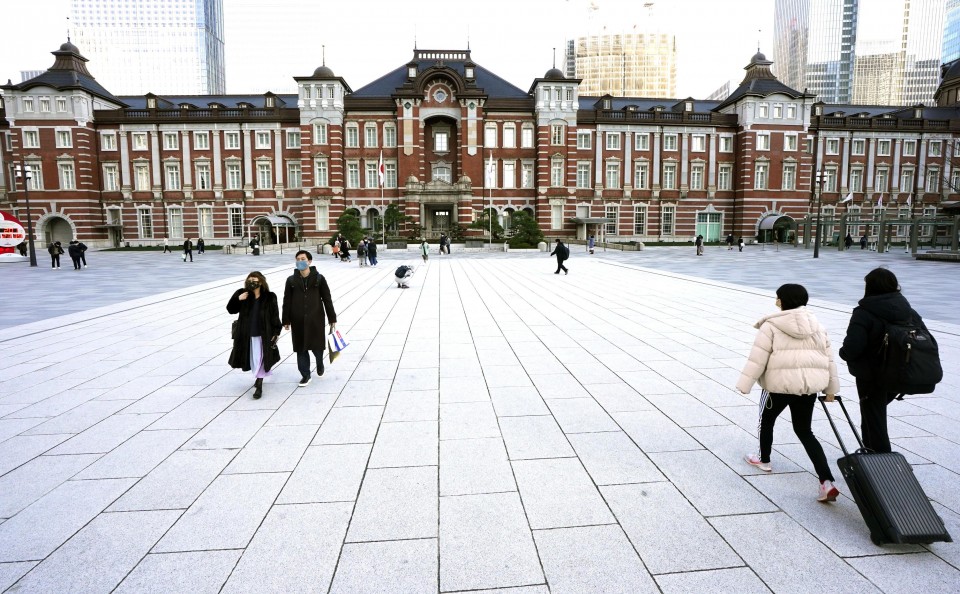 Fewer people than in ordinary years walk in front of JR Tokyo Station on Jan. 3, 2021, amid the coronavirus pandemic. (Kyodo) ==Kyodo

The 72-year-old prime minister said he would "set an example" by being among the first to be vaccinated.

While pledging additional financial support for hospitals combating the virus, he said a law revision aimed at providing benefits for those who comply with anti-virus steps and penalizing those who do not will be sought in a parliamentary session to be convened later this month.

Suga also said the entry into Japan of businesspeople now allowed from some designated countries will be stopped if a coronavirus variant is found there.

The prime minister reiterated his pledge to hold the Tokyo Olympics this summer and "bring hope and courage to the world."

But he struck a cautious tone over his signature "Go To Travel" tourism promotion campaign, which has been suspended nationwide until Jan. 11, saying, "It is difficult to restart it if a state of emergency is declared."

Following the press conference, Suga met with officials in charge of the government's response to the pandemic and instructed them to quickly consider the issuance of another declaration.

A state of emergency was previously declared in the capital and six prefectures in early April last year during Japan's first wave of infections, and expanded nationwide later that month, affecting school, sports, cultural and economic activities. It was lifted in steps the following month as coronavirus cases subsided.

Legislation giving the government the authority to declare a state of emergency was enacted in March last year.

It provides a legal basis for governors to ask residents in their prefectures to stay at home and also enables stronger steps to deal with outbreaks, including the requisition of medical supplies and food as well as expropriation of private land for emergency health facilities.

But the legislation does not provide a basis for imposing a lockdown with travel restrictions or fines for leaving the house, as some other countries have done.

The Tokyo government began asking that restaurants, bars and karaoke venues serving alcohol close by 10 p.m. in late November, offering them compensation, but the measure has so far been ineffective in lowering the number of virus infections.

The capital's call for shorter business hours was originally scheduled to end Dec. 17 but has been extended to Jan. 11. The three nearby prefectures have also taken similar steps.

Koike told reporters Sunday, "Since the Tokyo metropolitan area and surrounding prefectures are connected, we are coordinating with each other to implement effective measures."

The metropolitan government decided Monday to ask eateries that serve alcohol to close by 8 p.m., earlier than usual, from Friday. The step will then target all dining facilities including those which do not serve liquor from Jan. 12 through Jan. 31.

Saitama Prefecture will take a similar step, initially covering venues serving alcohol and later expanding it to all eateries.

According to sources familiar with the matter, compensation will be increased from current levels.

Meanwhile, elementary, junior high and senior high schools are unlikely to be asked to close at the same time, other government sources said.

The number of infected people who have developed serious symptoms in Tokyo stood at 101 on Sunday, the first three-digit figure since a state of emergency over the virus was fully lifted in late May last year.

Koike has expressed concern over the greater burden on medical institutions. On Monday, the number of people with severe symptoms in Tokyo hit a record 108.

The capital confirmed 884 new cases, bringing its cumulative total to 63,474, by far the largest among the country's 47 prefectures.