Baseball legend Henry "Hank" Aaron, whose Hall of Fame playing career helped to break racial barriers in U.S. sports and culture, died on Friday, according to his former team and media reports. He was 86.

The Atlanta Braves said in a statement that Aaron died peacefully in his sleep, without citing a cause of death. 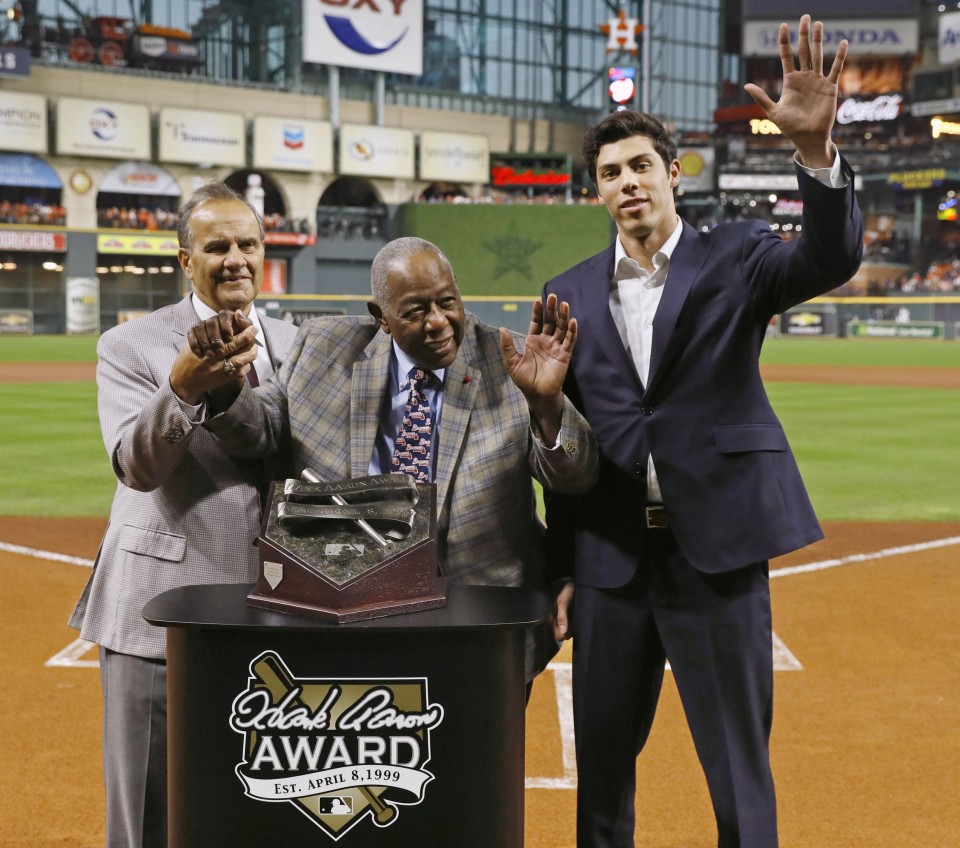 "We are absolutely devastated by the passing of our beloved Hank," the team's Chairman Terry McGuirk was quoted as saying.

Aaron, an African American from the southern state of Alabama, made his debut with the Braves -- then based in Milwaukee -- at age 20 in 1954, and stayed with the team for 21 of his 23 seasons in the majors.

Persevering in the face of racial abuse, Aaron shattered the previous career record of 714 home runs set by Babe Ruth. He hit his 715th homer in 1974 and finished his career with a total of 755, a record that stood for more than 30 years.

News of Aaron's death prompted an outpouring of tributes from colleagues, leaders and fans inspired by his achievements.

"Hank Aaron was one of the best baseball players we've ever seen and one of the strongest people I've ever met," former U.S. President Barack Obama tweeted, praising the legacy of "this unassuming man and his towering example." 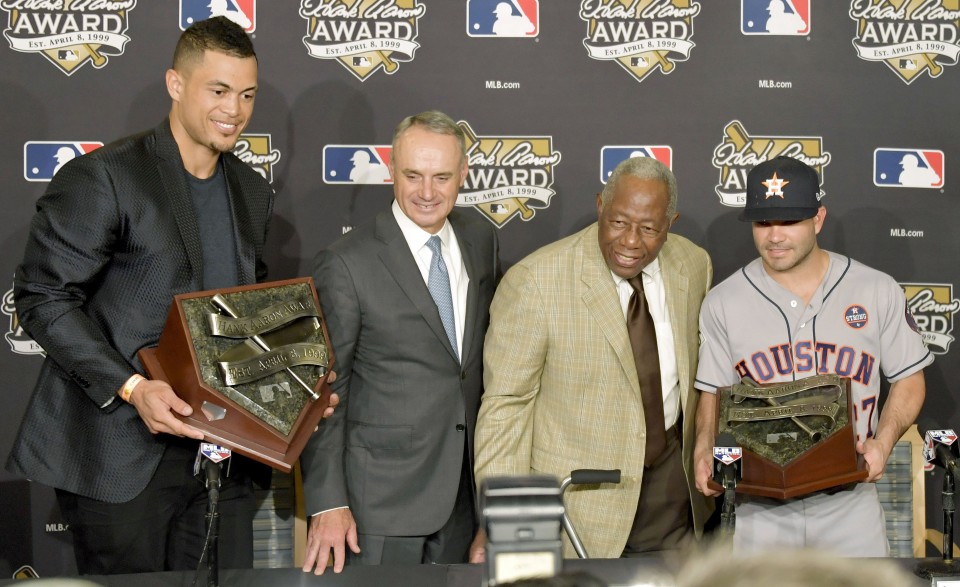 (From L) Giancarlo Stanton of the Miami Marlins, Major League Baseball commissioner Rob Manfred, Hall of Fame slugger Hank Aaron and Jose Altuve of the Houston Astros pose for a photo in Los Angeles on Oct. 25, 2017, after Stanton and Altuve were named the winners of the year's Hank Aaron Award for offensive excellence. (Kyodo) ==Kyodo

In a statement, Major League Baseball Commissioner Robert Manfred said that Aaron "symbolized the very best of our game."

"His monumental achievements as a player were surpassed only by his dignity and integrity as a person," Manfred added.

Following his retirement after the 1976 season, Aaron was selected as a near-unanimous pick for the Hall of Fame on his first ballot in 1982. His 3,771 career hits currently rank third highest in MLB history, and he still holds the all-time career RBI record with 2,297.

After his playing career, Aaron became a front-office executive for the Braves focusing on player development and was active in promoting youth sports and humanitarian causes.

For his furtherance of U.S.-Japan friendship through baseball, including events in collaboration with Japan's home run king Sadaharu Oh, Aaron received the Order of the Rising Sun, Gold Rays with Rosette in 2015.

"He was great in everything. He was a paragon of a major league player," said Oh, chairman of the Fukuoka SoftBank Hawks, in a statement released by the Japanese baseball team. Aaron and Oh, whose 868 home runs are the most by a professional baseball player, initiated the establishment of the World Children's Baseball Foundation.

Aaron "contributed to spreading baseball among children. He had a wonderful baseball life," the 80-year-old Oh said.