Top-ranked maegashira Daieisho moved to within one win of his first championship, earning his 12th win while his nearest rival slipped up on Saturday, the penultimate day of the New Year Grand Sumo Tournament.

Daieisho's victory, over No. 4 maegashira Tamawashi, left him and ozeki Shodai the only two wrestlers in title contention at the 15-day tourney at Tokyo's Ryogoku Kokugikan. 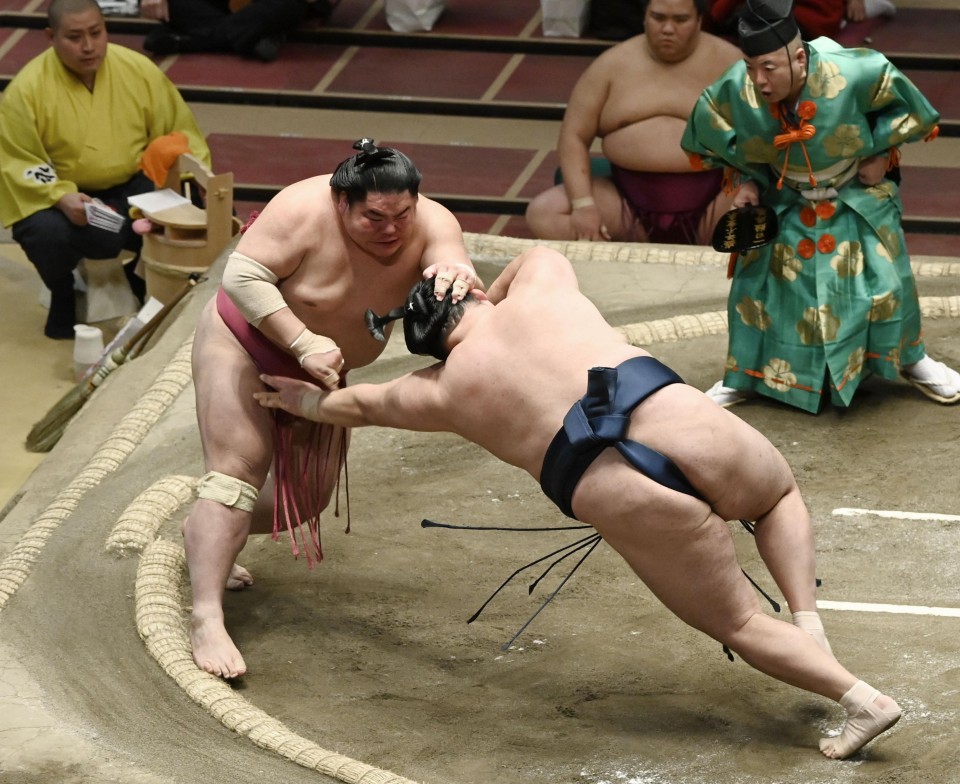 Daieisho brought down Tamawashi (5-9) in a bruising bout, getting off the mark quickest and landing three powerful shoves to the Mongolian's throat. Tamawashi landed some hard shots of his own, but one more blow to the throat from Daieisho set up a slap down that ended the fight.

Shodai, needing a win in the day's penultimate bout to stay level with Daieisho, was not up to the challenge posed by sekiwake Terunofuji, whose sights are firmly focused on a return to the ozeki rank he last held in 2017 before serious knee injuries sidetracked his career.

In a long see-saw battle in which Shodai held all the early advantages but could not finish, Terunofuji remained on the attack. He got spun around in his attempt to ram the ozeki out of the ring, but escaped before Shodai could shove him out from behind.

Just as the bout looked like it was going to turn into a deadlock, Shodai lost his footing and went down.

"I'm not focused on what my opponent is going to do but on the match itself," said Terunofuji (10-4), who has now reached 10-plus wins in three of his four tournaments since returning to the elite makuuchi division in July.

"That (regaining the rank of ozeki) has been my goal and I'm happy to be getting close."

Shodai ascribed the loss to a lack of stamina and eyed a win on the final day that could possibly see him in a tie for the lead and set up a championship playoff.

"There's nothing I can do about the defeat," he said. "I'll maintain my concentration assuming I'll wrestle two more bouts."

In the day's final bout, ozeki Asanoyama earned his 10th win, absorbing the charge of No. 7 Meisei (8-6) and thrusting him down.

Sekiwake Takanosho (8-6) survived being driven back to the brink by Okinoumi (7-7). When the No. 5 maegashira shifted his weight to execute a force out, he left himself open and Takanosho brought him down at the straw.

Komusubi Takayasu (9-5) landed a salvo of slaps and shoves against No. 6 Kagayaki (5-9), backed him to the straw and forced him out. Mitakeumi (8-6) failed to match his fellow komusubi's ninth win after he was forced out by No. 5 Endo (6-8).

No. 2 maegashira Takarafuji (9-5) forced out 198-kilogram Ichinojo (9-5), beating him for just the third time in 15 career bouts. The Mongolian No. 12 created a mid-ring stalemate by refusing to move, but Takarafuji, who has been in top form this tournament, finally broke the deadlock and levered his longtime nemesis over the straw.

Mongolian No. 8 Kiribayama (8-6) secured his first winning record in two tournaments with a hard-fought win over fellow 24-year-old Midorifuji. The No. 14, a makuuchi debutant, suffered his sixth loss.

Ozeki Takakeisho, who entered the tournament with a shot at promotion to yokozuna, withdrew with an ankle injury on Day 10 of the meet, which is missing a postwar-record 18 wrestlers from the top two divisions, 15 of them due to the coronavirus.