Ozeki Shodai moved into a tie for first place Wednesday at the New Year Grand Sumo Tournament after the overnight leader, No. 1 maegashira Daieisho, took his second loss of the meet.

Shodai defeated No. 5 Okinoumi in less than decisive fashion after being made to redo their bout on Day 11 at Tokyo's Ryogoku Kokugikan, while Daieisho fell to No. 3 Onosho. 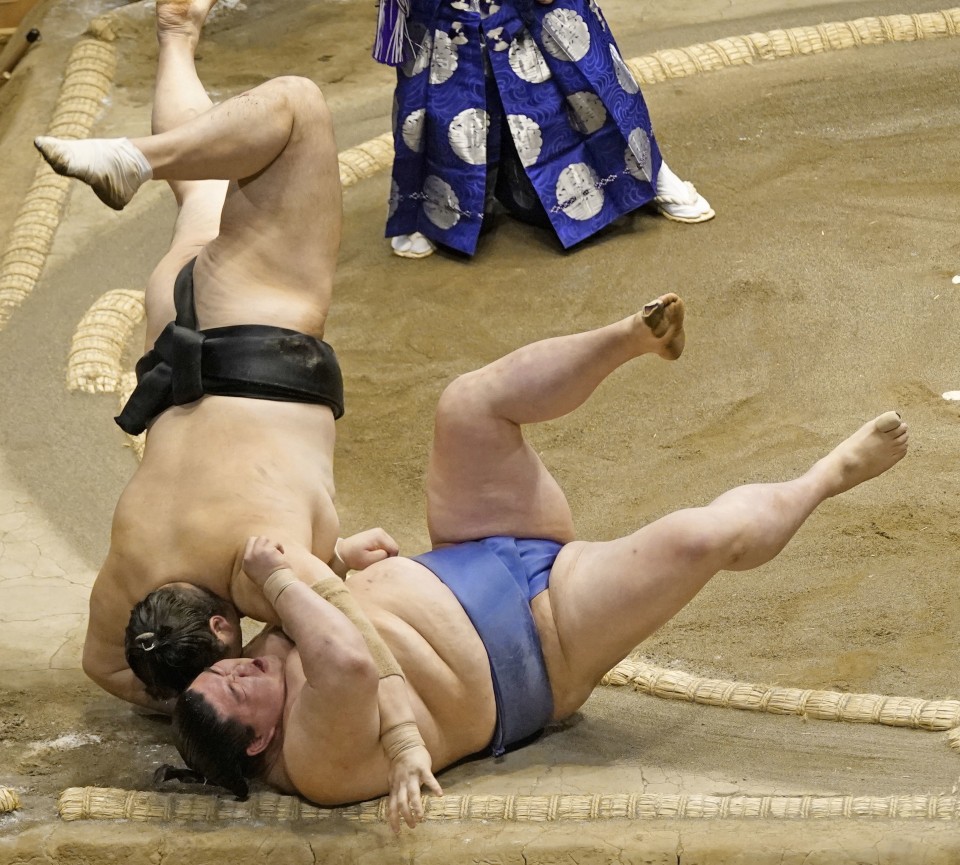 Ozeki Shodai (R) survives a close call against Okinoumi on the 11th day of the New Year Grand Sumo Tournament at Ryogoku Kokugikan in Tokyo on Jan. 20, 2021. (Kyodo) ==Kyodo

The joint leaders of the 15-day tournament are tied at 9-2, with ozeki Asanoyama and No. 7 Meisei one win back at 8-3.

In the day's final scheduled bout, Shodai burst out of the blocks and drove Okinoumi to the straw, but the maegashira was able to execute a desperate slap down at the edge. After a long deliberation, the judges determined both exited simultaneously.

Okinoumi (6-5) took Shodai straight to the edge in their rematch and appeared to win, but after another conference, the judges ruled one of the maegashira's toes touched down over the straw before the ozeki fell out.

Daieisho relinquished his outright lead after succumbing to Onosho (7-4) for the second tournament in a row.

The Oitekaze stable wrestler exploded out of the blocks with his trademark thrusting attack, but Onosho circled away at the edge and thrust his opponent down off the dohyo.

Having completed a clean sweep against the elite "sanyaku" ranks over the first week of the 15-day tournament, 27-year-old former sekiwake Daieisho is aiming to become his stable's first top-division champion.

Asanoyama, who entered the meet as a demotion-threatened "kadoban" ozeki, preserved his rank with a hard-fought eighth win against sekiwake Takanosho (6-5).

Asanoyama started strongly, wrapping up Takanosho and moving him to the edge, but the sekiwake managed a reversal and momentarily gained the upper hand before succumbing to a slap down.

Meisei secured his winning record by pushing out in-form No. 2 Takarafuji (6-5).

"I was able to fight according to my game plan. I wanted to attack from a lower angle and apply pressure. (Now) I just want to win my match tomorrow," said Meisei, who is scheduled to face Daieisho on Day 12

Sekiwake Terunofuji (7-4) bounced back from his disappointing Day 10 loss to Takanosho by pushing out No. 4 Tamawashi (5-6).

The former ozeki, who has set his sights on regaining sumo's second-highest rank, stayed on the front foot as he quickly chased his Mongolian compatriot from the ring.

Komusubi Takayasu (7-4) is also on the verge of a winning record after slapping down No. 5 Endo (5-6). The former ozeki kept Endo at bay with a fierce thrusting attack before slinging him to the sand.

The other komusubi, Mitakeumi (6-5), pushed out No. 4 Tochinoshin (3-8), consigning the Georgian former ozeki to a losing tournament.

Competing at a trimmed-down 198 kilograms, the giant former sekiwake from Mongolia needs one more victory for his third straight winning record since returning to the top division in September.