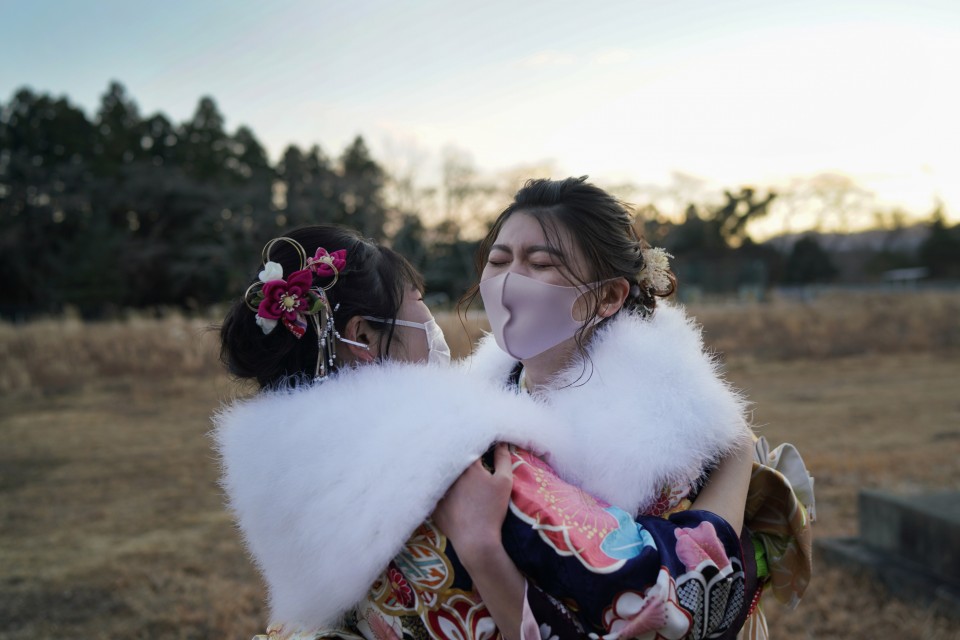 Old friends Nozomi Kaminagakura (L) and Mari Yamamoto hug each other in a schoolyard before parting on Jan. 9, 2021. (Kyodo)

"Take care. Let's meet again," Nozomi Kaminagakura and Mari Yamamoto said repeatedly as they hugged in a corner of a weed-strewn schoolyard in the town of Namie in Fukushima Prefecture that is still partly under an evacuation order.

The friends were neighbors until they were forced to leave their hometown when they were in the fourth grade because of the Fukushima nuclear disaster triggered by the March 2011 earthquake and tsunami in northeastern Japan.

They smiled for most of the day when they visited Namie in January but became tearful as they were about to part. Wearing kimono, they had attended a coming-of-age ceremony in the town earlier in the day.

Amid the COVID-19 pandemic, seats at the ceremony were spaced apart and the participants only took off their face masks for the commemorative photograph. There was no reunion party afterward. 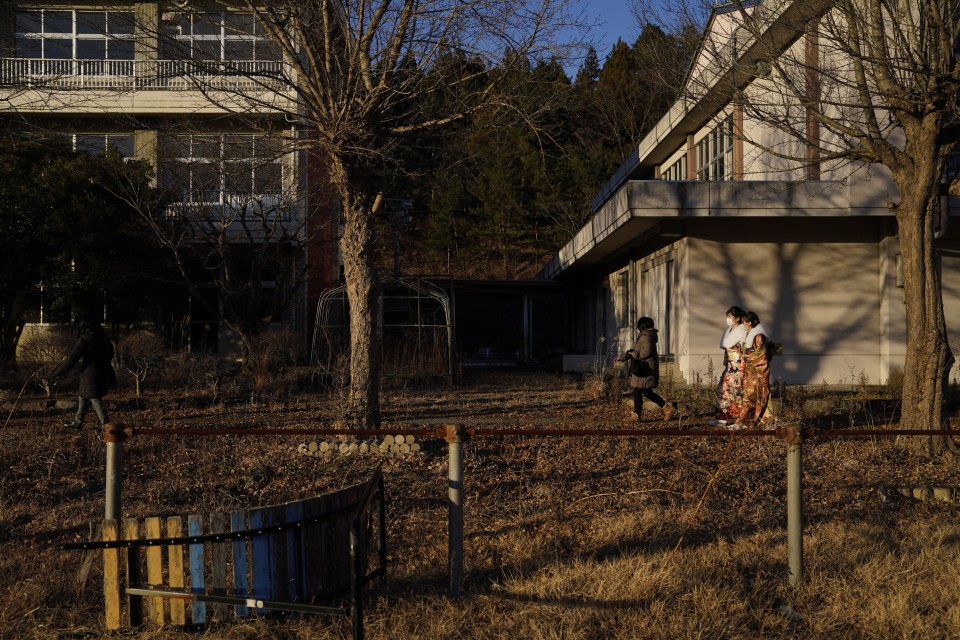 Eleven former classmates along with their families visited the abandoned building of Karino Elementary School, which is set to be demolished.

In contrast to the bleak schoolyard, the young adults were cheerful as they shared stories of their school days and took photos.

Their parents also looked delighted to see them enjoying their reunion.

"Where do you live now?" they asked one another. One even asked, "Do you really remember me?"

It was their first return to the school together since the disaster forced all the residents of the town to evacuate.

"We were separated without any time to prepare," one of them said. 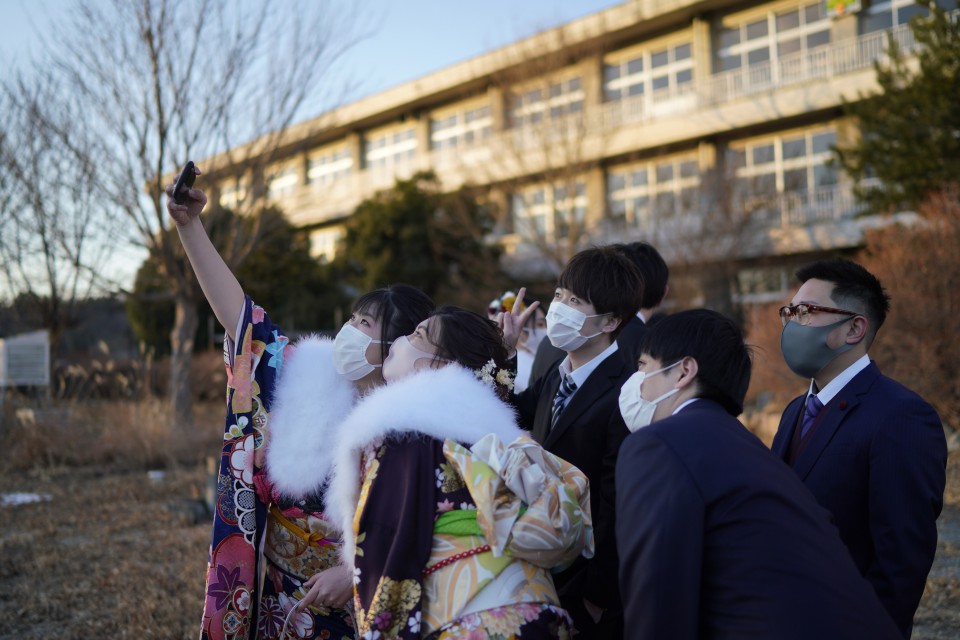 Former classmates take a photo in the schoolyard. As many as 11 of them gathered for the first time in almost a decade. (Kyodo)

Kaminagakura, now a university student in Sendai in adjacent Miyagi Prefecture, said the area where she and Yamamoto used to lived remains basically off limits because radiation levels are still high.

Affectionately calling each other "Non-chan" and "Mari-chan," they played almost every day back then, at a nearby river in the summer and sledding on a hill in the winter.

"I never thought we'd be unable to see each other," Kaminagakura said, adding she had expected to return to the town after a short time.

At the school, however, she was able to freely converse with her former classmates, even after such a long time. "I was glad they haven't changed."

Minori Yoshida, who attends a technical school in Yokohama, near Tokyo, was forced to evacuate in the midst of moving to her new home in the town. The house remains vacant.

"I feel at ease whenever I come to Namie," said Yoshida, who was visiting for the first time in three years with her family, who now live in the city of Fukushima.

When asked why she feels so, Yoshida said, "Because it is in the countryside? I have mixed feelings though, looking at the scenery now."

About her friends from Namie, she said, "They are special to me." 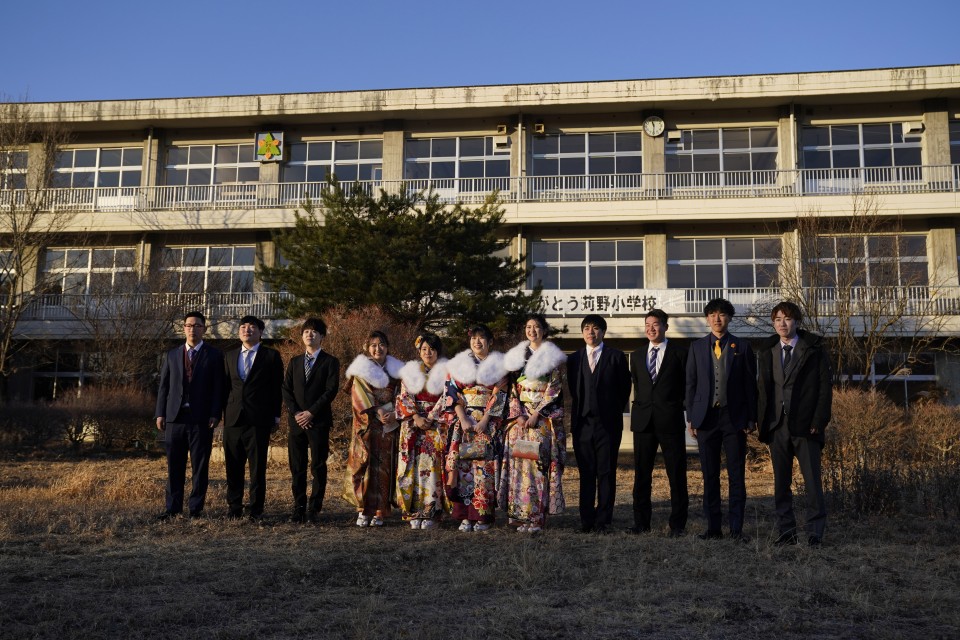 The 11 young adults stand side-by-side for a group photo in front of a school building to be demolished.

It might be the last time the former classmates could gather at the school before its demolition. They took a group photo in front of the school building.

A banner placed on the three-story building's balcony read, "Forever in the hearts of Karino pupils. Thank you, Karino Elementary School."

The 11 former classmates were slow to leave, even though the sun was setting, and kept repeating, "Take care. Let's meet again." 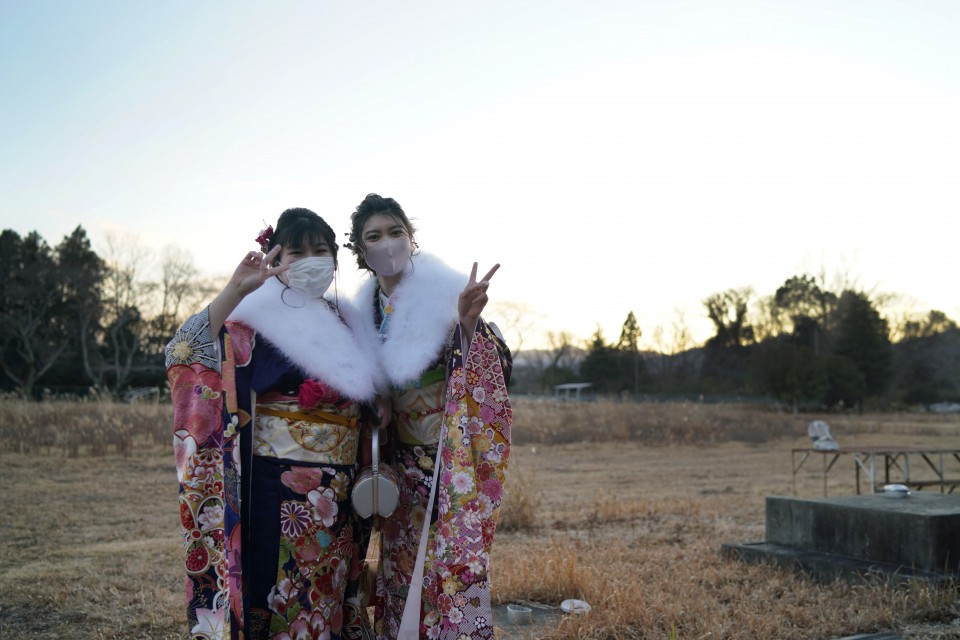 Nozomi Kaminagakura (L) and Mari Yamamoto in kimono pose in the schoolyard. (Kyodo)