Indonesian authorities said Sunday they had located the "black box" flight recorders from a Boeing 737-500 that crashed in the sea off the capital Jakarta with 62 people aboard, as the search for survivors and wreckage continued. 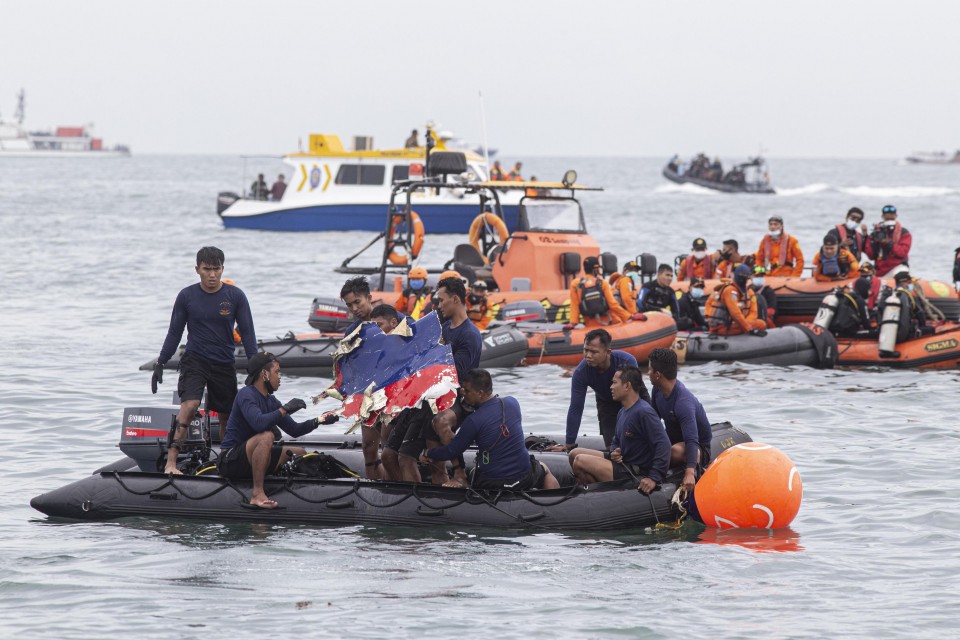 A rescue team is pictured in the search operation for the Sriwijaya Air Flight SJ182 plane on Jan. 10, 2021 in Jakarta, Indonesia. (Getty/Kyodo)

As body parts believed to be those of passengers on Sriwijaya Air Flight SJ182 as well as suspected debris from the aircraft were recovered, President Joko Widodo urged the public to pray that survivors would be found.

The plane disappeared from radar minutes after taking off from Jakarta's Sukarno-Hatta International Airport on Saturday afternoon and is thought to have crashed near Laki Island, a part of the Thousand Islands chain, just north of the capital.

The plane's departure had been delayed due to heavy rain.

"Black boxes have been located," Marshal Hadi Tjahjant, commander of the Indonesian military, said, adding signals from them had been detected.

He had said earlier that signals "strongly believed" to originate from the plane's flight recorders had been detected in the suspected location of the crash.

A minute after takeoff, the plane requested to ascend to 29,000 feet (8,839 meters), according to Transportation Minister Budi Karya Sumadi. However, at 2:40 p.m., air traffic control inquired with the pilot as to why the plane was heading northwest instead of its expected path.

A few seconds later, the plane disappeared from radar, the minister said.

Flight tracking website Flightradar24 showed that after taking off, the plane climbed to 10,900 feet in approximately four minutes, but then went into a steep descent over the next 21 seconds, with the last received data placing the plane at 250 feet from the water's surface.

Relatives and friends of those on the ill-fated aircraft were shown on television waiting for news at both Jakarta and Pontianak airports.

"I waited for my wife and three children to arrive but wondered what had happened after I waited for two hours and the plane had not had arrived," Yasman Jay told Kompas TV before breaking into tears.

The cause of the crash remained unknown. Local fishermen told television networks there was heavy rain at the time of the incident and they seen a plane plunging into the sea. They also reported hearing two explosions.

Soerjanto Tjahjono, chief of the National Transportation Safety Committee, said his team was still compiling data for investigation but stressed that "the most important (thing) now is to save and rescue" the missing people.

The U.S. National Transportation Safety Board will also be involved in the investigation as the plane was made in the United States.

Sriwijaya Air CEO Jefferson Irwin Jauwena said the plane was "airworthy" and the flight was delayed about an hour from its scheduled departure time due to heavy rain.

Among the 62 people aboard the plane were 10 children, including three infants, and 12 crew members. All were Indonesians.

Established in 2003, Sriwijaya Air is the country's third-largest airline and is regarded as having a good safety record. Before Saturday's crash, it had been involved in five minor incidents, none resulting in casualties.

The crash was the second involving a Boeing 737 aircraft in Indonesia in recent years. In October 2018, a Boeing 737 MAX 8 operated by low-cost carrier Lion Air crashed off the northeast coast of Jakarta immediately after takeoff, killing all 189 passengers and crew.

The Lion Air incident, along with another involving an Ethiopian Airlines aircraft in 2019, caused the grounding of Boeing 737 MAX airliners. The Boeing 737-500 model involved in Saturday's crash was an earlier generation not affected by the grounding.