Japan's new unified university entrance exams started Saturday across the country as organizers took anti-coronavirus measures such as requiring test-takers to wear masks and disinfect their hands and ensuring that venues are well ventilated. 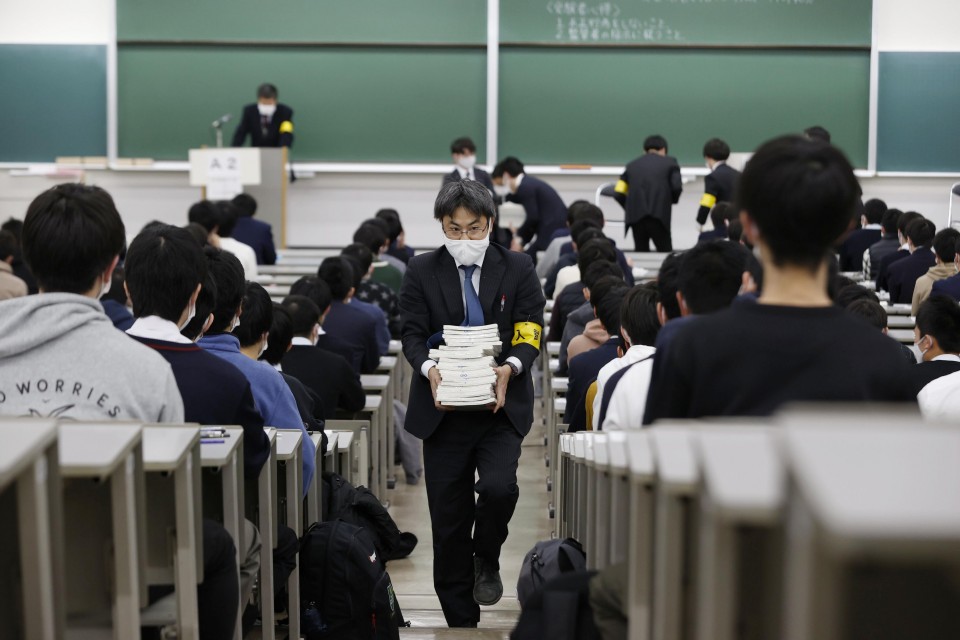 A record 866 universities, colleges and junior colleges will use the results in their screening processes, the center said.

Geography, history, civics, and Japanese and foreign languages were on a list of exams for Saturday, while science and mathematics tests are to take place on Sunday.

The new exams will also be held on Jan. 30 and 31 for high school third-graders whose studies were interrupted due to the temporary closures of schools last year triggered by the coronavirus outbreak.

At the University of Tokyo's Hongo campus in the capital's Bunkyo Ward on Saturday morning, mask-wearing examinees waited in line at intervals of about 1 meter and proceeded quietly as the gates opened at 8 a.m.

Tokyo, along with 10 other prefectures, is under a state of emergency over the pandemic, with officials urging residents to refrain from nonessential outings.

"It was hard for me not being able to study at school during last spring's school closure," said Sasuke Tanaka, 18, a third-grader at a public high school and one of about 2,800 test-takers at the campus. "I still have some worries, but I will just do my best."

As with the previous test, which was used for 31 years, the new exam format features multiple-choice questions but puts more emphasis on examinees' critical-thinking skills, according to the center.

In an English test, the allocation of marks has increased for listening.

If applicants are unable to sit the exams the first time round due to health and other reasons, they can sit them in late January, according to the center.