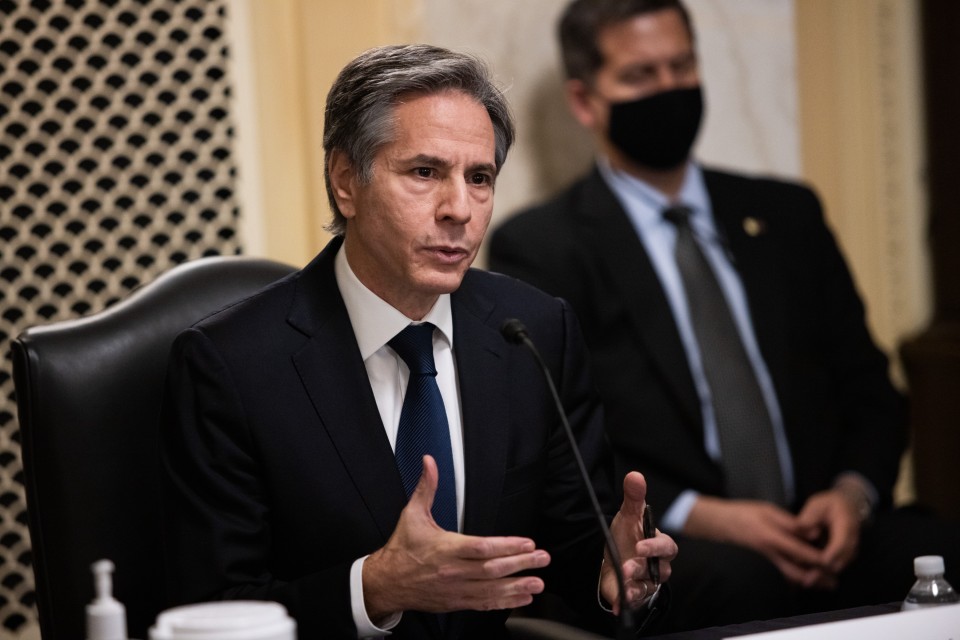 Nominee for U.S. Secretary of State Antony Blinken testifies at his confirmation hearing before the Senate Foreign Relations Committee on Capitol Hill on Jan.  19, 2021 in Washington, DC. (Pool/Getty/Kyodo)

The U.S. Senate on Tuesday approved foreign policy expert Antony Blinken to become secretary of state, as the new administration of President Joe Biden seeks to revive U.S. relationships with allies and return to multilateralism.

Blinken has been a critic of former President Donald Trump's "America First" foreign policy, slamming it as having weakened U.S. alliances and left a vacuum in the world for China to fill. He has advocated working with U.S. partners so that the United States can engage with China from "a position of strength."

A longtime foreign policy adviser to Biden, the 58-year-old was deputy secretary of state and deputy national security adviser under the Barack Obama administration, which lasted for eight years through January 2017 until Trump took office.

During a hearing at a Senate committee last week, Blinken admitted Trump was "right in taking a tougher approach to China," although he noted that in a number of areas he "very much disagreed" with the Trump administration's tactics.

He also vowed to review the entire approach and policy toward North Korea amid continuing U.S. failure to rid the secretive country of its nuclear weapons.

The Biden administration, launched last week, has already started undoing Trump's moves that were seen as having undermined U.S. leadership on the global stage, such as by bringing the United States back into the Paris climate accord and ceasing the process of withdrawing the country from the World Health Organization.