The number of travel-associated novel coronavirus cases in Japan increased by nearly seven times after the government began a subsidy program aimed at promoting domestic tourism in July, a recent study found.

"Although the second epidemic wave in Japan had begun to decline by mid-August, enhanced domestic tourism may have contributed to increasing travel-associated COVID-19 cases," Kyoto University researchers Hiroshi Nishiura and Asami Anzai said in the study, published Thursday in the Journal of Clinical Medicine. 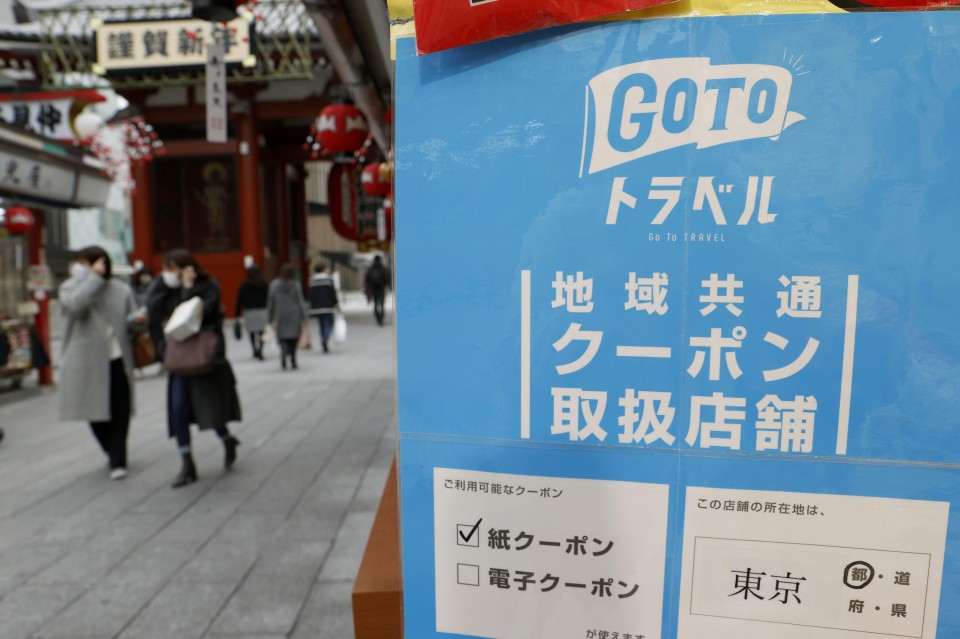 A poster for the Japanese government's "Go To Travel" subsidy program is seen in Tokyo's Asakusa tourist area on Dec. 11, 2020. (Kyodo)

They analyzed daily virus numbers prior to and after the "Go To Travel" campaign, spearheaded by Prime Minister Yoshihide Suga, that effectively covered half a traveler's expenses.

The program was launched on July 22 to support the tourism industry after it was severely affected by the pandemic. But the government suspended the campaign nationwide in late December due to a sharp resurgence of infections, although Suga was reluctant to change course until the last minute.

The researchers analyzed travel movements of around 4,000 people from 24 of Japan's prefectures who contracted the COVID-19 disease caused by the novel coronavirus between May and August last year.

A total of 817 had crossed prefectural borders or had come into contact with those who had.

They compared the number of virus cases before -- between June 22 and July 21 -- and after the travel scheme was implemented.

The number of travel-associated daily infections in Japan increased around threefold after the start of the campaign, the study found.

When it comes to tourism-associated virus cases, as opposed to those related to business trips, they rose by a maximum 6.8 times.

"It is natural that enhancing human mobility across wider geographic areas would facilitate additional contact" and spread the virus, it said.