Most of the poultry farms in Japan hit by avian flu since last year had flaws in preventing access of wildlife to poultry houses, government officials said Saturday.

The farm ministry's inspection of affected chicken farms found that 90 percent of the surveyed farms had defects in keeping poultry separated from wild birds and other animals such as holes in roofs and walls of chicken houses. 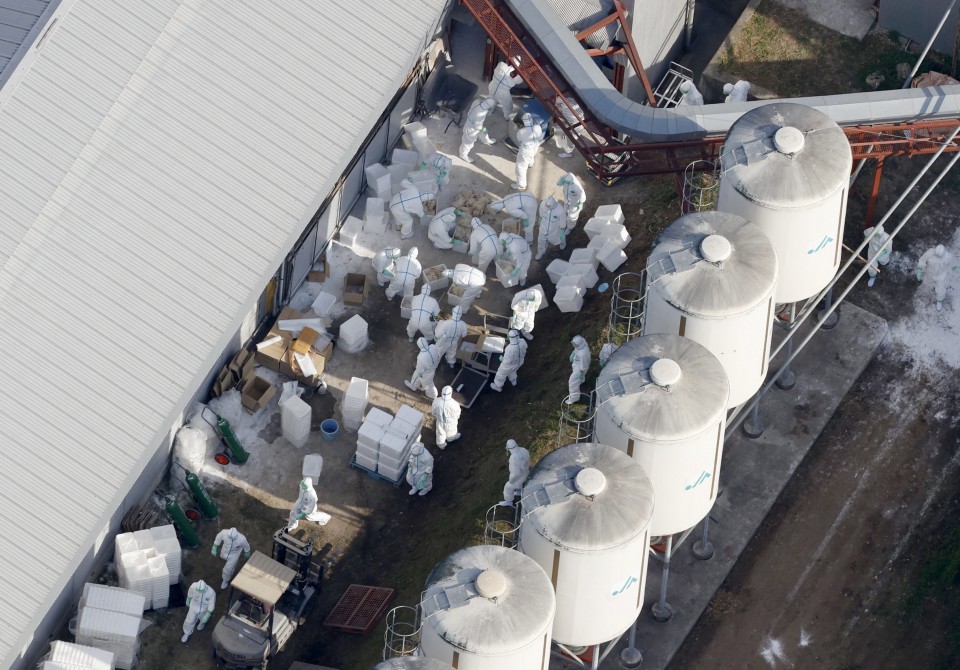 Photo taken Nov. 26, 2020, from a Kyodo News helicopter shows workers in protective suits at a chicken farm in Awaji in Hyogo Prefecture, western Japan, after an outbreak of avian flu was confirmed there. (Kyodo) ==Kyodo

The Ministry of Agriculture, Forestry and Fisheries has confirmed an avian flu outbreak at 39 farms so far this season, resulting in culling of about 6.2 million birds, a record number for one season.

The ministry's survey team inspected 30 of the affected farms and discovered flaws in preventive measures at 27 of them.

At the remaining three farms, there were cases where poultry houses had no visible defect or damage but showed signs of rodents entering them and potentially infecting chicken feed, the officials said.

At 19 farms, sufficient disinfection measures were not taken by people working there, they said.

As for the extent of the latest outbreak, the National Agriculture and Food Research Organization has said birds infected by the highly pathogenic type of strain confirmed this season tend to survive longer compared with strains found in past outbreaks, causing infections to spread more widely before farm operators can discover first signs of infections.

"Looking at how infections have spread this season, (the outbreak) may be more than farms can deal with on their own," he said.

"The latest strain needs to be analyzed more closely to come up with a stronger response," he added.