Ozeki Takakeisho began his bid for promotion to sumo's highest rank of yokozuna with an opening-day defeat to komusubi Mitakeumi at the novel coronavirus-hit New Year Grand Sumo Tournament on Sunday.

At Ryogoku Kokugikan in Tokyo, where a state of emergency has been in force since Thursday, nervous-looking November champion Takakeisho was unable to overpower his opponent. He tried to yank Mitakeumi down but lost his balance when he failed to make contact, allowing the komusubi to push him out of the ring. 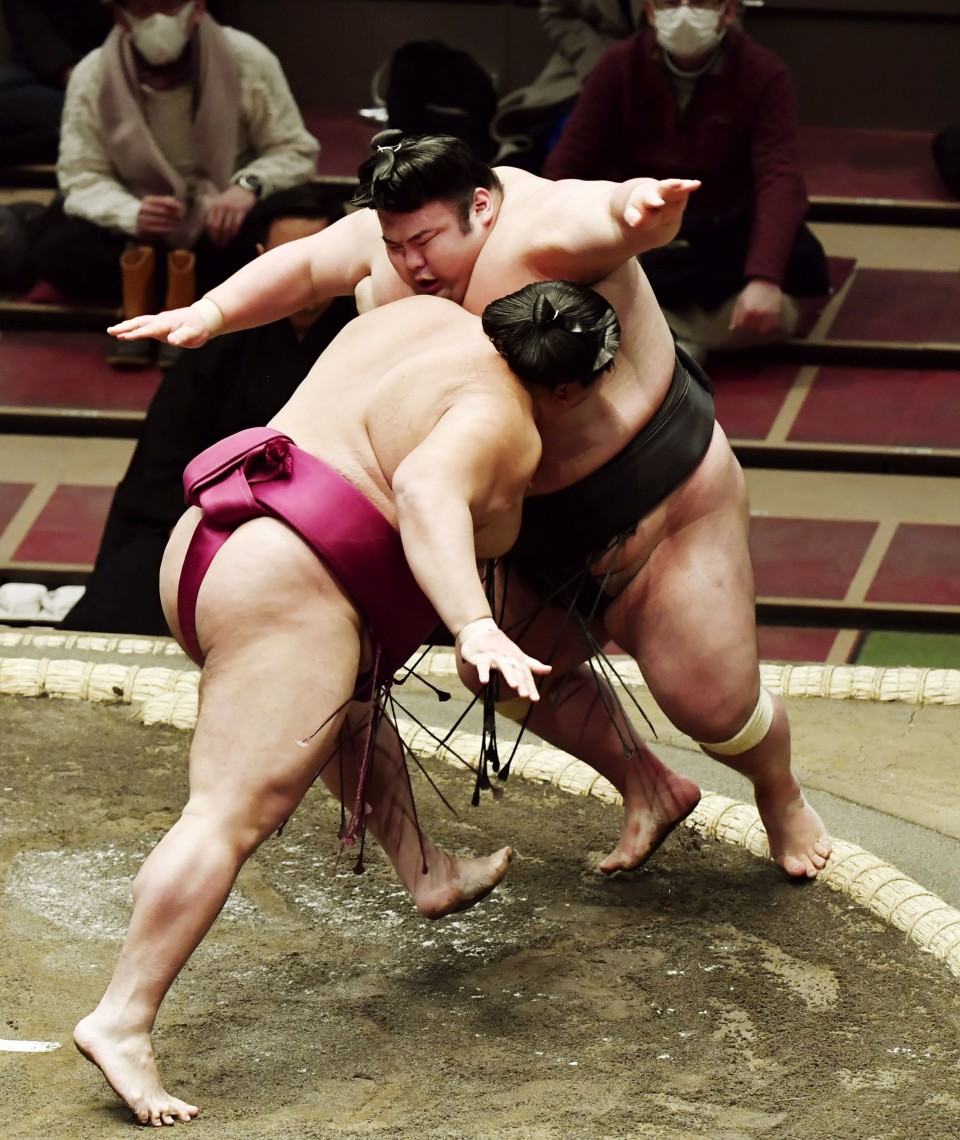 Takakeisho (back) is shoved out to an opening-day defeat by Mitakeumi at the New Year Grand Sumo Tournament in Tokyo on Jan. 10, 2021. (Kyodo)

After five wrestlers tested positive on Saturday, the Japan Sumo Association said the tournament could be canceled if more wrestlers became infected. A total of 65 wrestlers will miss the tourney due to the virus.

A postwar high of 16 wrestlers in the top two divisions, makuuchi and juryo, were sidelined on the first day with 15 related to the virus, including yokozuna Hakuho who tested positive on Tuesday. Fellow grand champion Kakuryu has withdrawn due to lower-back issues and has now pulled out of four straight tournaments.

Up to 5,000 are being allowed in this time, roughly 80 percent of the arena's capacity, and JSA Chairman Hakkaku praised those who are making the tournament possible in such difficult circumstances.

"This is not something the association could manage by itself," Hakkaku said. "It can only be carried out with their cooperation. We are also receiving advice from specialists."

"We are truly grateful for the spectators' presence."

Takakeisho, who won his second Emperor's Cup in November through a championship playoff after going 13-2, could need a near-perfect record here to secure promotion to grand champion with no head-to-head matchups against the two absent yokozuna.

Ozeki Shodai, who needs eight wins to maintain his rank having pulled out of the November tournament with a left ankle injury, used his big frame to comfortably stem the movement of No. 1 maegashira Hokutofuji and force him out.

Fellow ozeki Asanoyama, who also has his rank on the line after withdrawing from the November meet with a right shoulder injury, was pushed out by No. 1 Daieisho.

Sekiwake Terunofuji, who also went 13-2 in November, picked up where he left off. The 29-year-old Mongolian former ozeki pushed 21-year-old No. 3 Kotoshoho out and off the raised ring in seconds.

Serious injuries and surgeries to both knees saw Terunofuji demoted as far as the fifth-tier jonidan division in March 2019, but he won his second career championship on his makuuchi return last July. Now just one rank below ozeki, he is the first wrestler to be promoted to sekiwake after demotion to the jonidan division.

Sekiwake Takanosho tenaciously dealt with No. 2 Takarafuji to push him out, but komusubi Takayasu, another former ozeki, was hapless as No. 3 Onosho easily pushed him down.

No. 14 makuuchi newcomer Midorifuji secured a memorable win over No. 13 Akua. Following a false start, Midorifuji was pushed to the edge, but the diminutive 24-year-old nimbly dodged Akua's shove and pulled him down.

No. 16 Akiseyama, who previously fought one tournament in the makuuchi division in March 2016, marked his return to the top tier with a win, the 35-year-old forcing out No. 15 Kotonowaka in a lengthy bout.