No. 1 maegashira Daieisho pulled out a victory with his back to the wall to improve to a perfect 8-0 on Sunday, the midway point of the New Year Grand Sumo Tournament.

Having already defeated the seven wrestlers here ranked higher than him, Daieisho was pushed to the brink but managed to take a two-win lead into the final week of the 15-day tournament at Tokyo's Ryogoku Kokugikan. 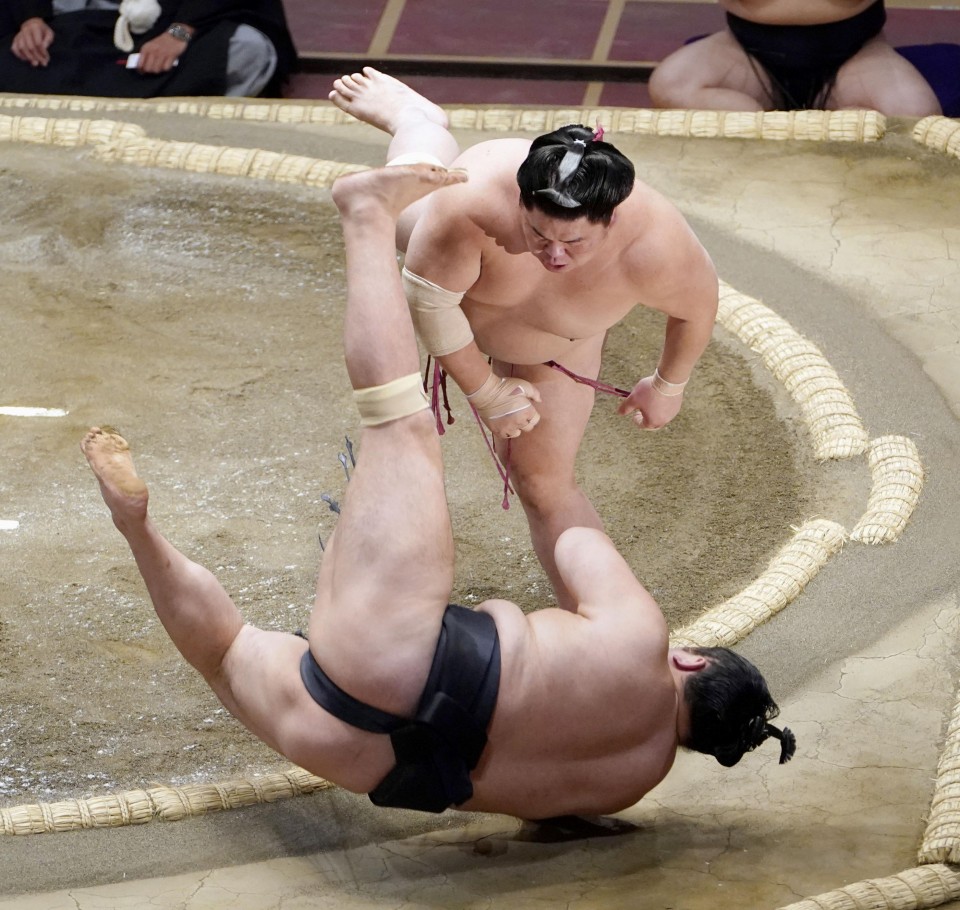 Ozeki Shodai, who started the day one win back at 6-1, suffered his second loss in a long rollicking battle with komusubi Mitakeumi.

Daieisho's opponent, No. 6 Kagayaki (3-5) used his longer arms to shove the tournament leader off balance. Kagayaki pursued his opponent to the straw and tried to shove him out, but Daieisho was prepared. He bent backward, pivoted to his left and threw the charging Kagayaki out at the straw.

In the day's final bout, Shodai failed to throw Mitakeumi (3-5) at the first go after accepting his charge from the jump. The ozeki then became a reckless aggressor, trying to force his opponent out without a grip on his belt. Mitakeumi, however, bided his time until a belt hold presented itself, grabbed it and forced the ozeki out.

"I really hung there and remained patient today," said Mitakeumi, who improved to 11-9 against the ozeki. "I haven't gotten good results at this tournament but I am going into my fights against the ozeki wrestlers with a strong resolve to do better."

A day after earning an ugly fourth win, Asanoyama picked up his fifth victory with a straight-forward shove-out of No. 5 Endo (4-4).

Both Shodai and Asanoyama, who are fighting as demotion-threatened "kadoban" ozeki, need eight wins to avoid dropping to the sport's third-highest rank of sekiwake.

Ozeki Takakeisho, who entered the tournament with a chance of promotion to yokozuna before losing his first four bouts, continued to look out of sorts in his sixth loss.

No. 4 Tamawashi (5-3) traded slaps toe-to-toe with the ozeki, and simply got the better of the exchange against his apparently flustered opponent. Takakeisho got turned around at the straw and was easily shoved out.

Two former ozeki with an eye toward regaining their former rank, komusubi Takayasu and sekiwake Terunofuji each improved to 5-3. Takayasu beat winless young No. 3 maegashira Kotoshoho, while Terunofuji flung down veteran No. 5 Okinoumi (4-4).

Sekiwake Takanosho also improved to 5-3, shaking off a one-sided loss to Daieisho the day before to drive another former ozeki, Georgian No. 4 Tochinoshin (2-6).

No. 7 Meisei easily forced out No. 16 Akiseyama, leaving both wrestlers with 6-2 records after starting the tournament 5-0. Meisei was quicker off the mark and rocked his 35-year-old journeyman opponent back before levering him over the straw.

The tournament is taking place without either of the sport's highest-ranked wrestlers.

Yokozuna Hakuho is absent after testing positive for the coronavirus, while fellow grand champion Kakuryu is out due to lower-back trouble.

The tournament, the first held by the Japan Sumo Association during a state of emergency, is missing 65 wrestlers due to coronavirus-related issues, with 15 of those coming from the elite makuuchi division and the second-tier juryo division.