Japanese Prime Minister Yoshihide Suga said Tuesday he will make a final decision Thursday on a plan to declare another state of emergency in Tokyo and three neighboring prefectures as the areas continue to see record numbers of new coronavirus cases.

On the same day, the government's coronavirus panel unveiled emergency proposals seeking more telework and stricter conditions for holding events, referring to the virus situations in Tokyo and Chiba, Saitama and Kanagawa prefectures as in need of steps to deal with infections spreading explosively.

The government plans to keep the declaration in place for about one month, officials said, adding it is expected to take effect Thursday or the following day.

"What the people want from the government and the ruling party is a sense of security and hope. We will put the coronavirus response first and work hard at it," Suga said at an executive meeting of the ruling Liberal Democratic Party.

Suga said in his New Year press conference on Monday he would consider declaring a state of emergency covering Tokyo and the three prefectures.

The resurgence of virus cases has raised concerns about strain on the medical system, with the panel saying on Tuesday if the situation is not put under control in the Tokyo area, it could spill over nationwide.

Japan confirmed over 4,900 new infections on Tuesday, marking the highest daily tally yet, as Tokyo and neighboring Saitama, Chiba and Kanagawa prefectures accounted for over 2,500 or more than half of the nationwide total.

Tokyo reported 1,278 new coronavirus infections, with a record-high 111 COVID-19 patients in serious condition. It was the second-highest figure for the capital, after 1,337 cases reported Dec. 31. 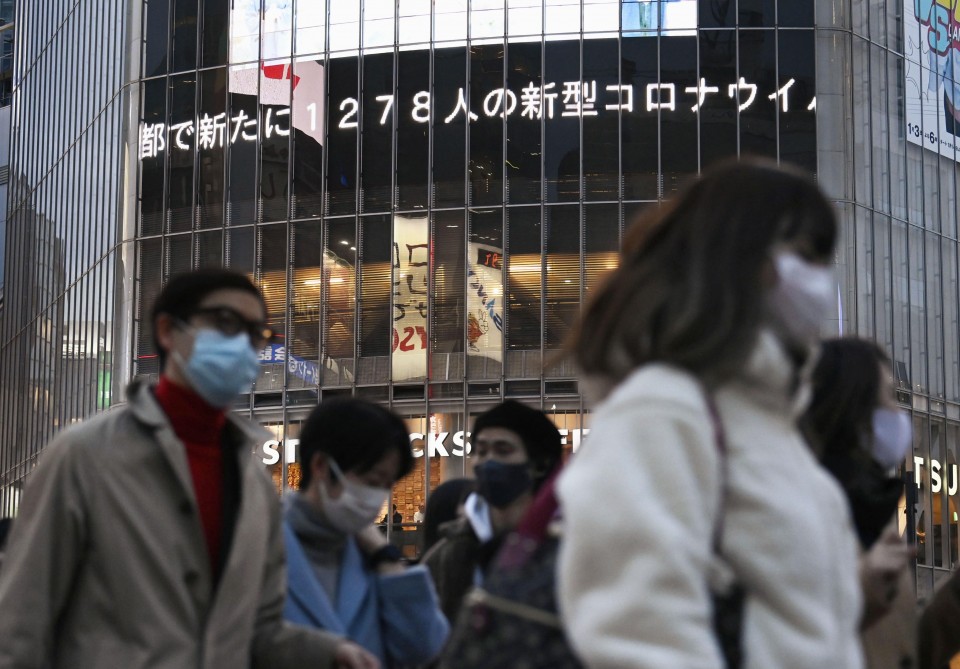 People wearing face masks walk in Tokyo's Shibuya area on Jan. 5, 2021, with an electric board seen in the back showing news that the Japanese capital reported 1,278 new novel coronavirus infections the same day, the second-highest daily tally on record. (Kyodo) ==Kyodo

Saitama, Chiba and Kanagawa also logged record numbers of infections for the new daily tally, while the number of deaths nationwide set a new record of 76. Those with serious symptoms totaled 771, a record high, the health ministry said.

Suga said he will consult further with health experts on Thursday before making a final decision.

Panel head Shigeru Omi, meanwhile, struck a cautious note, saying a state of emergency, when declared, would "not guarantee infections will be under control" and that seeing the effect in one to two weeks is "impossible."

The government also plans to suspend the entry of businesspeople from some countries, including China and South Korea, as well as Taiwan, according to an official.

In late December, Japan suspended new entries into the country by nonresident foreign nationals arriving from most of the world through the end of January, while maintaining a special scheme to ease restrictions for business travelers and students from 10 Asian nations plus Taiwan.

The government will not ask schools and universities to close even if a state of emergency is declared for Tokyo and the three neighboring prefectures, the education minister said Tuesday.

"A uniform school closure in any region should be implemented only where all social activities need to be restricted," education minister Koichi Hagiuda said at a press conference.

Officials of the Education, Culture, Sports, Science and Technology Ministry said the risk of infection in schools is low given the limited number of coronavirus cases among children to date. They also pointed to the relatively small number of cases in which children had developed severe health complications related to COVID-19.

In February last year, then Prime Minister Shinzo Abe requested a nationwide school closure prior to the state of emergency declaration for the capital and six prefectures in early April.

The school closure lasted as long as three months in some areas, causing disruption to students and forcing working parents to take time off to look after children.

The central government also plans to continue suspending its "Go To Travel" domestic tourism promotion campaign from Jan. 12 onward, government sources said. It suspended the subsidy program nationwide until the day before. 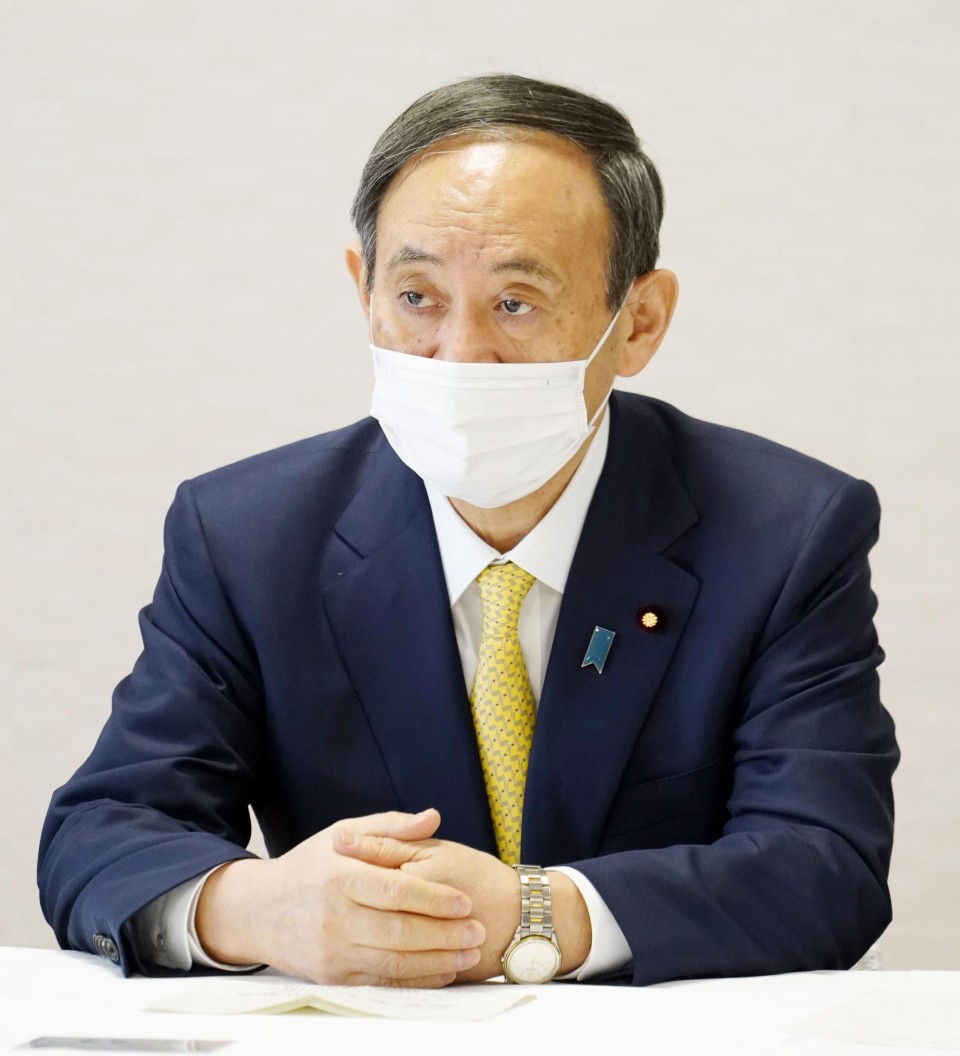 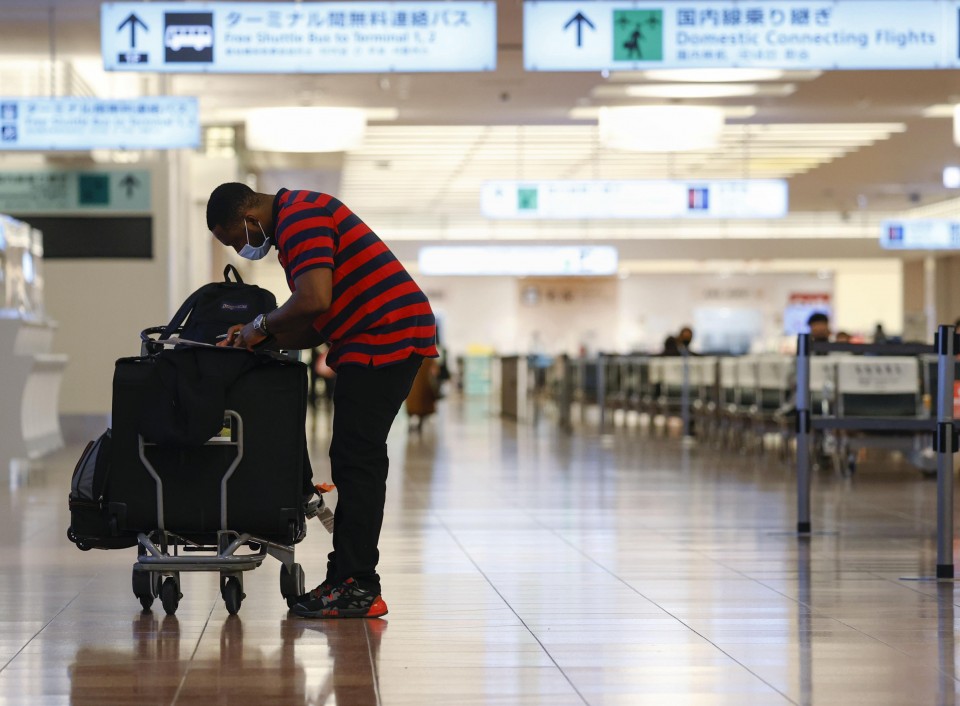 An arriving lobby at Tokyo's Haneda airport is seen deserted on Jan. 5, 2021, amid the novel coronavirus pandemic. (Kyodo) ==Kyodo

Mixed reactions as Suga hints at emergency for Tokyo, nearby areas