Japan looking at declaring another state of emergency over virus 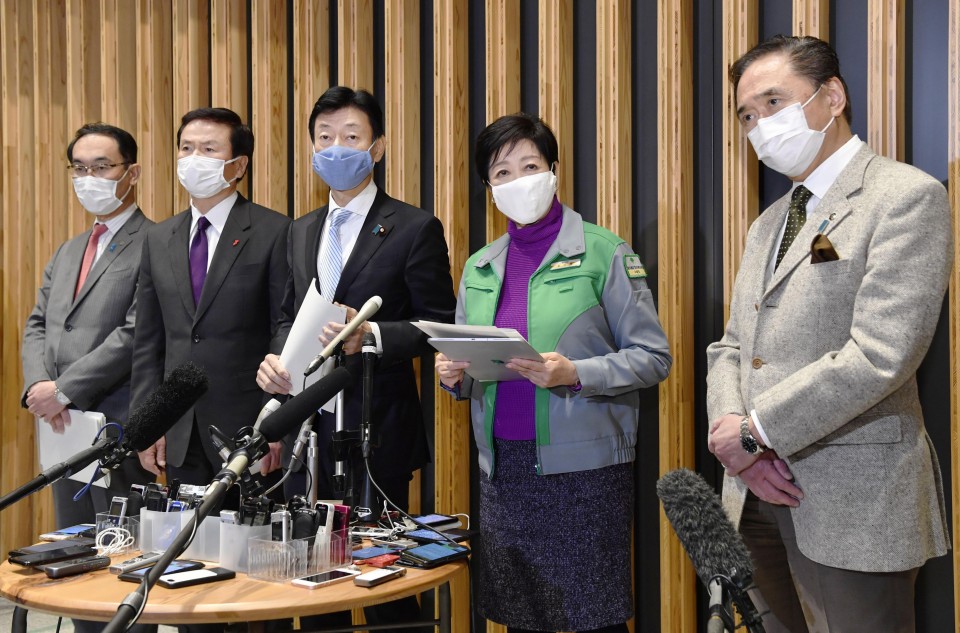 The government will consider whether to declare another state of emergency over the novel coronavirus, a minister said Saturday, following a request from the governors of Tokyo and three neighboring prefectures where a resurgence of infections has strained the medical system.

"We agreed that we are in a severe situation that warrants us considering the declaration of a state of emergency," Yasutoshi Nishimura, the minister in charge of Japan's coronavirus response, told reporters after a meeting with Tokyo Gov. Yuriko Koike and the leaders of the Saitama, Chiba and Kanagawa prefectural governments.

But he added, "We will hear the opinions of experts" before deciding on the issue.

Prime Minister Yoshihide Suga did not attend the meeting. He was briefed at his office by health ministry officials about the governors' request as well as the current state of infections.

Suga has declined to comment on the need for another state of emergency over the coronavirus, apparently due to the potential fallout on the economy, which has been showing signs of recovering from the initial impact of the pandemic, as well as on the postponed Tokyo Olympics and Paralympics this summer.

The central government declared a state of emergency in April last year covering some of the country's 47 prefectures, including Tokyo and Osaka, before expanding it nationwide. The state of emergency was fully lifted in late May.

During the meeting, Nishimura asked the four governors to urge restaurants to stop serving alcohol at 7 p.m. and close at 8 p.m., saying the central government is planning to expand compensation for restaurants that cooperate.

Restaurants, bars and other establishments that serve alcohol have been asked to shorten their opening hours by closing at 10 p.m. or earlier in a wide area of Tokyo.

Nishimura also asked the governors to call on residents to refrain from making nonessential outings after 8 p.m.

"We will take as many measures as possible to curb the current spread of infections," Koike told reporters.

On Saturday, Tokyo reported another 814 coronavirus cases, continuing to see a rapid increase, with its cumulative total growing to 61,774, according to the metropolitan government.

Over 3,000 new cases were reported by local authorities across the country the same day.

The capital logged a record 1,337 new infections Thursday, exceeding 1,000 for the first time since the pandemic began. The three other prefectures have also seen record numbers of daily cases recently.