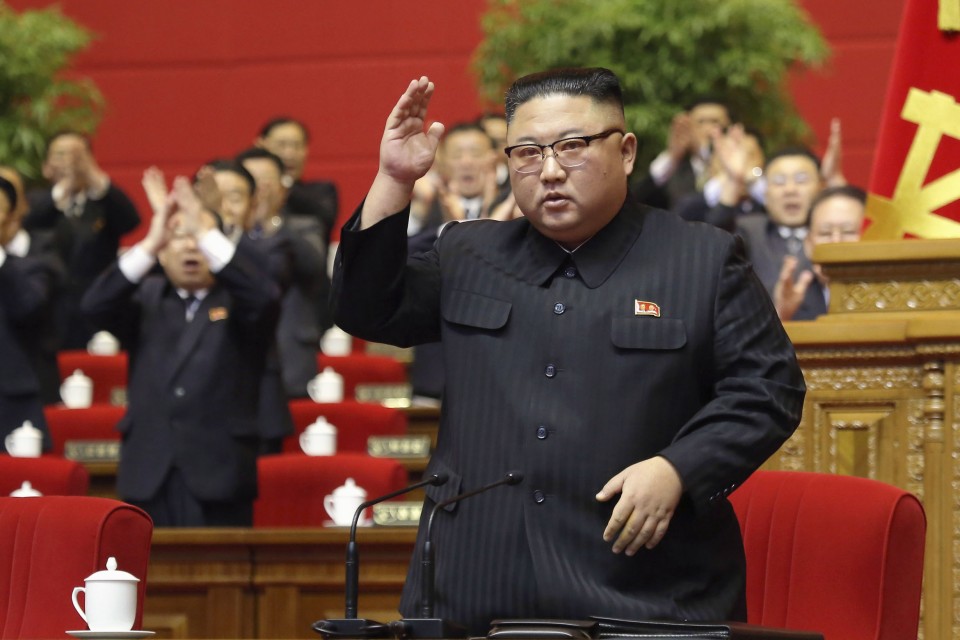 Kim's remarks were made on the final day of the eight-day party congress from Jan. 5, which was held for the first time in nearly five years.

Interest has focused on whether Kim would change his title as national leader from chairman of the State Affairs Commission to president, a title last held by Kim Il Sung, North Korea's founder and his grandfather.

Meanwhile, Kim's younger sister and close aide, Kim Yo Jong, criticized South Korea for announcing earlier that the North may have held a military parade on Sunday night on the occasion of the congress, effectively denying the report.

In a statement dated Tuesday and carried by KCNA in English, Kim Yo Jong called Monday's announcement by the South Korean military "senseless," adding, "Why do they take trouble craning their neck to follow what's happening in the North."

"The southerners are a truly weird group hard to understand," she also said. "They are the idiot and top the world's list in misbehavior as they are only keen on things provoking world laughter."

Speculation had grown that North Korea would conduct the first military parade since October ahead of the Jan. 20 inauguration of U.S. President-elect Joe Biden, whose administration will determine the future course of bilateral negotiations on the North's denuclearization.

During the congress, Kim displayed a confrontational attitude toward the United States, describing Washington as Pyongyang's "foremost principal enemy," according to KCNA.

"The entity of the U.S. and the real intention of its policy toward the DPRK will never change, whoever comes into power in the U.S," Kim was quoted earlier as saying at the gathering, referring to his country by its formal name of the Democratic People's Republic of Korea.

Kim, however, said, "Strong defense capabilities of the state never preclude diplomacy but serve as a great means that propels toward the correct orientation and guarantees its success."

"A key to establishing a new relationship between the DPRK and the U.S. lies in the U.S. withdrawal of its hostile policy towards the DPRK," Kim said, indicating that he remains eager to continue talks with Washington.

North Korea's economy has become more sluggish since it cut off traffic to and from neighboring China and Russia early last year to prevent the novel coronavirus, first detected in the Chinese city of Wuhan, from entering.

The plunge in trade with China, Pyongyang's closest and most influential ally, and the devastation of North Korea's agricultural sector by powerful typhoons and flooding have sparked concerns that its citizens may not be receiving adequate daily necessities.

China's trade with North Korea plummeted to its lowest level for a second straight month in November, the latest data showed. North Korea depends on China for more than 90 percent of its trade.

Kim has acknowledged that North Korea failed to achieve the economic development goals set in its strategy through 2020 in almost all sectors.

North Korea is also believed to be vulnerable to infectious diseases against a backdrop of chronic shortages of food and medical supplies, triggered by economic sanctions aimed at thwarting its nuclear and ballistic missile ambitions.

In the past, North Korea barred foreigners from entering the country during the 2003 epidemic of severe acute respiratory syndrome, or SARS, and the Ebola outbreak in West Africa in 2014.

Although Pyongyang claims the virus that causes the COVID-19 disease has not made inroads into the nation, many diplomats and international organization officials stationed in the country's capital have left North Korea since March 2020.

The previous ruling party congress, the first in 36 years, was held for four days from May 6, 2016.