Mixed reactions as Suga hints at emergency for Tokyo, nearby areas

Reactions were mixed following Prime Minister Yoshihide Suga's suggestion Monday that the government may soon declare a state of emergency over the coronavirus in Tokyo and three neighboring prefectures, following an unabated rise in infections over the New Year holidays.

Opposition parties criticized the decision as too little, too late, while some businesses lamented about the further economic loss the second such declaration, which government officials say could come this week and last for about one month, would bring. 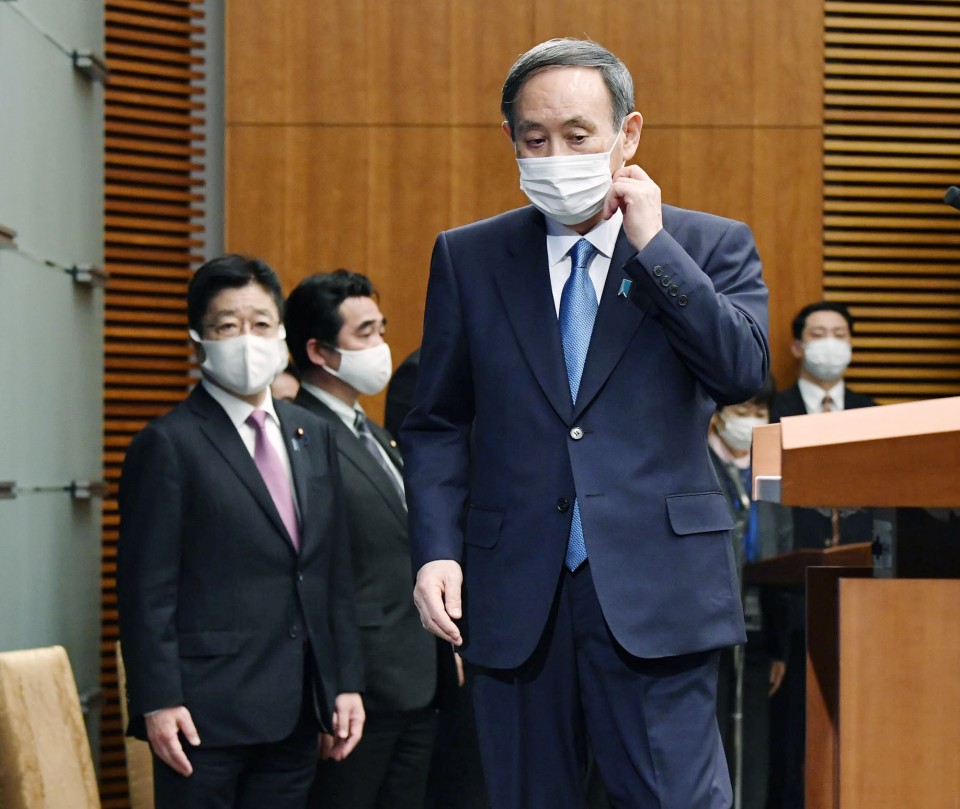 Japanese Prime Minister Yoshihide Suga is pictured before starting the year's first press conference at his office in Tokyo on Jan. 4, 2021. Suga suggested that Japan may declare another state of emergency in Tokyo and three neighboring prefectures in the near future to curb the spread of the novel coronavirus as infections have kept rising. (Kyodo) ==Kyodo

"The medical system is strained. Is it really enough to (issue an emergency declaration) for just Tokyo and three prefectures?" said Yukio Edano, head of the main opposition Constitutional Democratic Party of Japan.

Nobuyuki Baba, secretary general of the Japan Innovation Party, echoed such criticism, saying, "The government always ends up reacting after the event. A state of emergency should have been declared before the end of last year."

A 50-year-old restaurant manager in Yokohama's Chinatown expressed concern as he looked at his deserted establishment in Kanagawa Prefecture.

"I understand that the government will have to declare a state of emergency, but if it doesn't decide on financial support for food and drinking establishments, we are going to be in trouble," he said.

Eizaburo Seko, 41, the owner of a Japanese-style pub in Tokyo's Kanda district which has been in operation for over 50 years, said his sales fell by over 90 percent during the previous emergency declaration.

"If we have to close by 8 p.m., we won't be able to expect any sales at night," he said. On Monday, Tokyo and Chiba, Kanagawa and Saitama prefectures agreed to ask dining and drinking establishments to shorten their closing hours and close by 8 p.m.

Seko said he will again obey any requests for shorter business hours but criticized the government's response, saying, "If they don't aim at getting infections to zero, this situation will just drag on."

But many prefectural governors appeared to show support for the potential move.

"If infections are not brought under control in the capital and surrounding areas, we can't prevent a spillover into" other regions, said Niigata Gov. Hideyo Hanazumi.

Yamaguchi Gov. Tsugumasa Muraoka said, "If the big cities are not under control, tough times will continue for us here in smaller cities."

Reactions were also mixed among the public. A 63-year-old man from Tokyo said he believes it is "unavoidable" that a virus emergency will be declared again, following the one issued in April last year, saying it is "important for people to share a sense of crisis through the declaration."

"The economy is important but saving lives is the highest priority," he added. The man said he is taking precautions against the virus by staying mostly at home and avoiding dining out.

But Mirin Ito, a 32-year-old from Saitama Prefecture, said, "To be honest, I think the government decision is taking too long." The mother of two boys also fretted over what would happen if schools closed.

Tokyo, Chiba, Kanagawa and Saitama on Saturday pushed the central government to declare a state of emergency, days after the capital reported more than 1,300 new coronavirus cases in a single day for the first time.

"It is true that some people will face difficulty in maintaining their livelihoods if economic activities stop, but the most important issue is to ensure that the medical system will not collapse. We hope this will lead to a decrease in cases," said a Tokyo metropolitan government official.

Following Suga's pledge at a press conference Monday that the government will consider issuing such a declaration, Tokyo Gov. Yuriko Koike said her government will swiftly implement antivirus measures so that they will be effective.

Many Japanese firms expressed their intention to maintain or strengthen measures put in place when the first emergency was declared last year. NEC Corp. has limited onsite staff to around 40 percent, while Fujitsu Ltd. has asked its employees to refrain from group dining.

Chiba Gov. Kensaku Morita called the emergency declaration "our last card" in combating the virus. He acknowledged it might negatively affect the economy but underlined the importance of beating the virus.

"We face a critical moment to balance" antivirus measures and the economy, he said.