"Normally, it takes many years to make a vaccine, but in such a short span of time, not one, but two 'made-in-India' vaccines are ready," Modi said as he opened the drive via video conference. 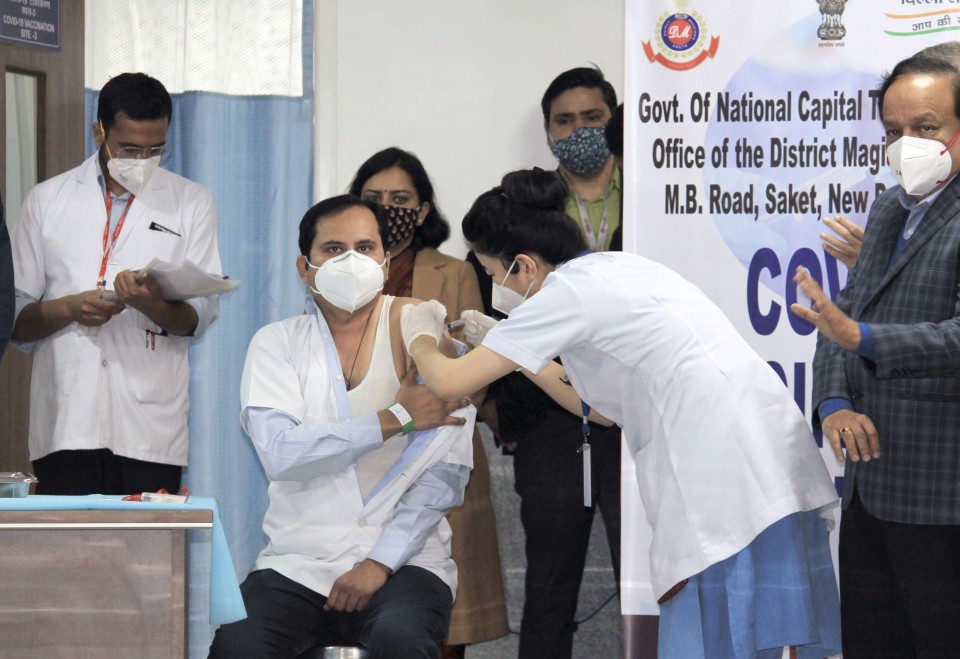 A medical worker gives a coronavirus vaccine shot to a patient in New Delhi on Jan. 16, 2021. (Kyodo) ==Kyodo

In what Modi called the world's largest vaccination program, officials aim to give 300 million people shots.

"Such a vaccination drive on such a massive scale has never been conducted in history," he said, adding, "There are over 100 countries with populations of less than 30 million, and India is administering vaccinations to that many people in the first phase only. In the second phase, we'll take this number to 300 million."

The first phase will target some 30 million health care and frontline workers, followed by 270 million others who are either over 50 or have serious underlying health conditions that make them more vulnerable to the disease.

The first dose was administered to a health worker at All India Institute of Medical Sciences, soon after Modi launched the campaign.

"I feared going to work for the past year, thinking that I might catch the virus...I agree with the prime minister that to fight against COVID-19, we need to get vaccinated," the worker said.

Earlier this month, the country's drug regulator gave a greenlight to emergency use authorization for two vaccines -- Covaxin, developed by India's Bharat Biotech International Ltd., and Covishield, developed by British drugmaker AstraZeneca Plc and the University of Oxford and manufactured by Serum Institute of India.

Both vaccines are administered in two doses, but unlike rival vaccines, including one developed by American pharmaceutical giant Pfizer Inc. and its German partner BioNTech SE that must be kept at subzero temperatures, the Indian vaccines need only be stored at cold temperatures.

According to Indian health officials, the government has procured the domestically produced vaccines at around 200 rupees ($2.7) per dose, or only 14 percent of the cost of the Pfizer-BioNTech vaccine and 9 percent of the vaccine developed by American biotechnology firm Moderna Inc.

While the affordability of the Indian vaccines is expected to enable their widespread use in other emerging and developing countries, some medical experts remain cautious about their safety and efficacy. The Indian government maintains they are safe.

"In the fight against the coronavirus, we've set an example for the world," Modi said.