Speaking by phone, Kishi and Austin, who was sworn in as defense secretary on Friday, pledged to further strengthen the Japan-U.S. alliance and safeguard peace and security in the Indo-Pacific region. 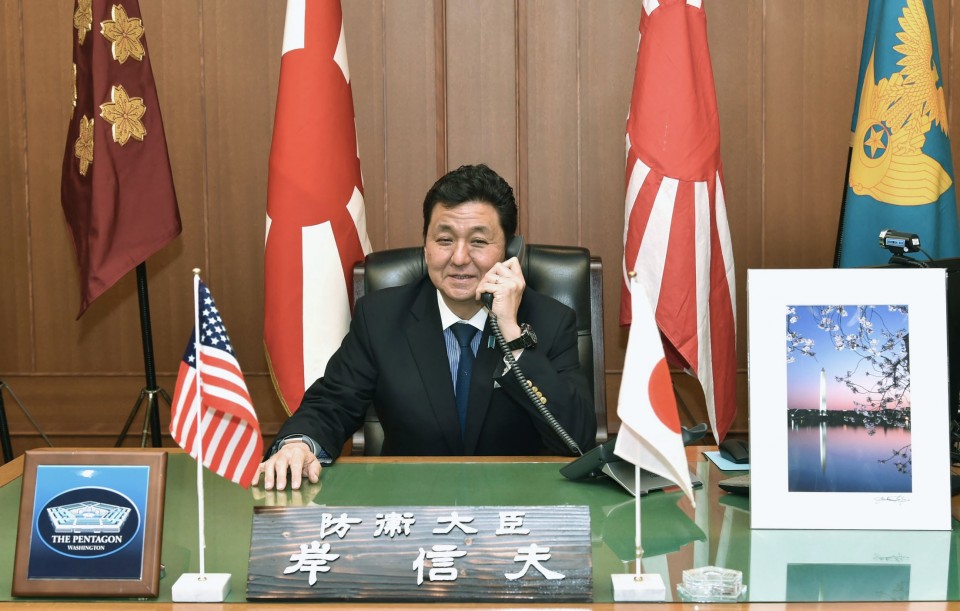 It marked the first ministerial talks between Tokyo and Washington since Biden took office last Wednesday.

Speaking to reporters after the talks, Kishi said the two ministers confirmed that Article 5 of the security treaty applies to the Senkaku Islands, meaning that Washington will defend Tokyo in the event of an armed attack against the group of East China Sea islets, called Diaoyu in China.

"We agreed to oppose any unilateral attempts to change the status quo in the East and South China seas," he said.

Kishi was alluding to China's repeated incursions into waters around the Senkakus in an attempt to undermine Japan's control over them, as well as Beijing's militarization of outposts in disputed areas of the South China Sea, parts of which are also claimed by Brunei, Malaysia, the Philippines, Taiwan and Vietnam.

Austin "affirmed that the Senkaku islands are covered by Article V of the U.S.-Japan Security Treaty, and that the United States remains opposed to any unilateral attempts to change the status quo in the East China Sea," the Pentagon said in a statement.

Kishi said the remarks, which are likely to irk Beijing, were "very encouraging."

Austin's assurance came after Prime Minister Yoshihide Suga received a similar comment in November from then President-elect Biden after he defeated Donald Trump in the U.S. presidential election.

In the talks, Kishi and Austin agreed on the key role of the bilateral alliance in the region and the need to cooperate with various partners, including outside the region, to maintain and strengthen a free and open Indo-Pacific, according to the Japanese Defense Ministry.

"We discussed the resolute and resilient nature of the U.S.-Japan Alliance and joint efforts to maintain a free and open Indo-Pacific," Austin said on Twitter.

Had a great first call with Defense Minister @KishiNobuo. We discussed the resolute and resilient nature of the U.S.-Japan Alliance & joint efforts to maintain a free & open Indo-Pacific. Kishi-san, I look forward to working with you. @ModJapan_en

"My impression was that he seemed very interested in the security of Asia," Kishi said, in reference to the new Pentagon chief. "In terms of the relationship with Japan, I felt that he attached great importance to the Japan-U.S. alliance."

Austin urged Japan to contribute more to providing security in the Indo-Pacific region, according to the U.S. Defense Department.

Prior to assuming the post, Austin said at a Senate committee hearing that he is looking forward to "refurbishing" U.S. alliances in the Indo-Pacific region.

Calling China a "pacing" or leading challenge for the Defense Department, Austin has vowed to develop capabilities and plans to maintain a competitive edge as Beijing builds up its military.

In Sunday's talks, the two ministers also agreed to work toward the goal of getting North Korea to rid itself of weapons of mass destruction and ballistic missiles in a "complete, verifiable and irreversible manner," Kishi said.

They confirmed their countries' determination to prevent North Korea from evading sanctions through such means as illegal ship-to-ship transfers and direct shipments of goods banned under U.N. Security Council resolutions.

Kishi said it is vital for Tokyo and Washington to reach a decision at an early date on a replacement for the five-year cost-sharing agreement for the hosting of American troops expiring in March. The two sides are currently in negotiations.

He said Japan would take into consideration the increasing security threat in the region, as well as the country's severe fiscal conditions.