No. 1 maegashira Daieisho took his first loss of the New Year Grand Sumo Tournament on Monday, allowing ozeki Shodai to close within one win of the outright lead.

Daieisho went to his trademark thrusting attack, but No. 2 Takarafuji (5-4) wheeled to the left to stay just out of reach. As he gave pursuit around the raised ring, Daieisho (8-1) lost balance on the sandy surface, allowing Takarafuji to secure victory by slap down. 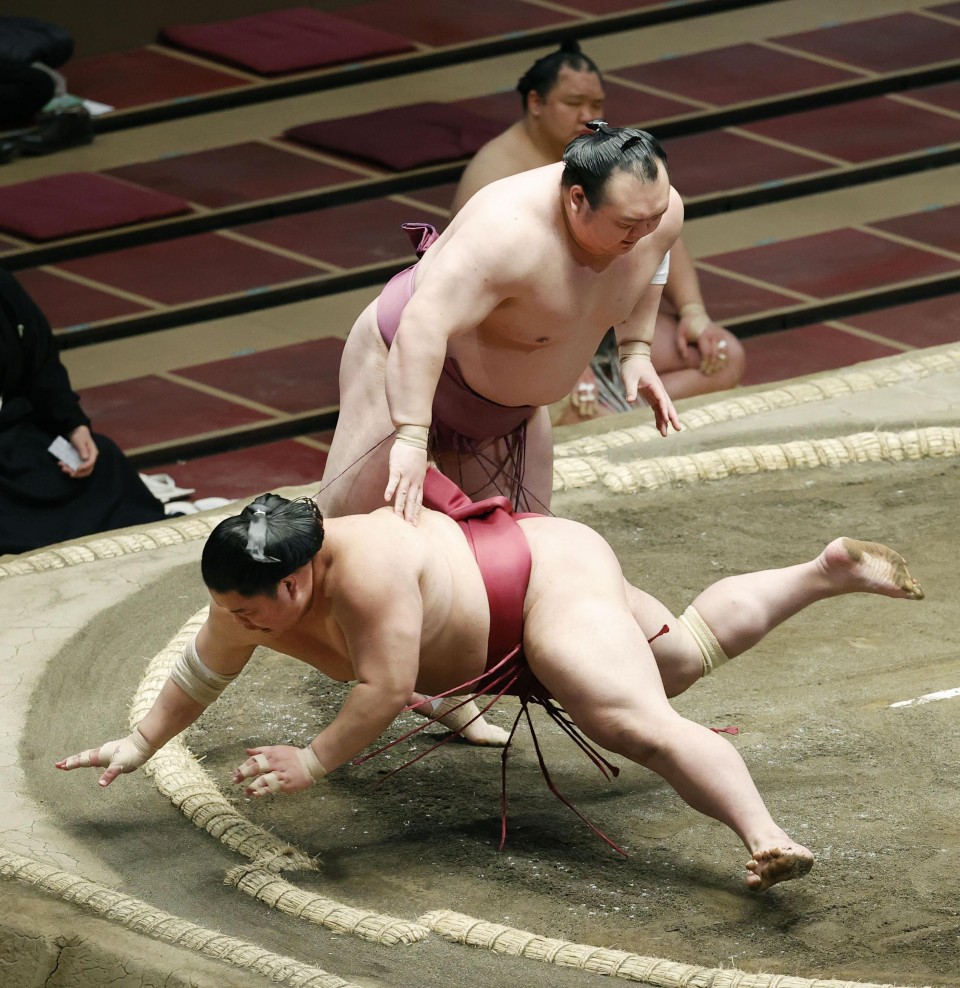 No. 2 maegashira Takarafuji (top) slaps down No. 1 maegashira Daieisho on Day 9 of the New Year Grand Sumo Tournament at Tokyo's Ryogoku Kokugikan on Jan. 18, 2021. (Kyodo)

Ozeki Shodai, who needs a winning record here at Ryogoku Kokugikan to retain the ancient sport's second-highest rank, improved to 7-2 after withstanding a strong opening attack from No. 4 Tamawashi (5-4). The Mongolian shoved Shodai back by his neck, but the ozeki regained his balance before pushing out his opponent.

Four wrestlers started Day 9 of the 15-day tournament with a 6-2 record, but Shodai was the only one to come out victorious. The other three -- rank-and-file maegashira Meisei, Kiribayama and Akiseyama -- are now among 10 wrestlers with a 6-3 record.

No. 7 Meisei showed plenty of mettle as he repeatedly crashed into the chest of No. 4 Tochinoshin, but the Georgian former ozeki kept his cool and executed an overarm throw to improve to 3-6.

No. 8 Kiribayama was forced out by his compatriot, giant No. 12 Ichinojo, who improved to 6-3.

No. 16 Akiseyama opened the meet with six straight wins, but the 35-year-old has not won since. Bulgarian No. 10 Aoiyama (5-4) swiveled the veteran around with an armlock throw before pushing him down to the sand.

Ozeki Asanoyama (6-3) had a stern test against komusubi Takayasu (5-4) but held tight with an overarm belt grip for a force-out win. It edged him close to the winning record he also needs to avoid demotion from ozeki. Both he and Shodai had losing records in November following injuries.

Ozeki Takakeisho had promotion to the premier rank of yokozuna in his sights coming into the meet, but after dropping to 2-7 at the hands of No. 5 Endo (5-4), the November champion is on the verge of a losing record here.

Unable to maintain his initial thrusting attack, Takakeisho backed off once, but his next forward drive was easily read by Endo, who jumped out of the way and pulled him down at the edge.

Sekiwake Terunofuji (6-3) labored to a force-out win over No. 6 Ryuden (3-6), while fellow sekiwake Takanosho (5-4) pushed No. 6 Kagayaki (4-5) to the edge but succumbed to a last-ditch armlock throw.

Komusubi Mitakeumi forced out No. 1 Hokutofuji (2-7) for his fourth win of the meet, where a total of 65 wrestlers have been missing since the first day due to coronavirus-related issues. The number of spectators at the venue capped at 5,000.