Japanese e-commerce giant Rakuten Inc. said Friday it will offer a monthly 20-gigabyte mobile data plan for 1,980 yen ($19) from April, the cheapest among major Japanese carriers, in a bid to attract subscribers amid intensifying price competition.

The new service plan follows those announced by larger rivals NTT Docomo Inc. and SoftBank Corp. last month priced at 2,980 yen, including free unlimited calls of up to five minutes from March. 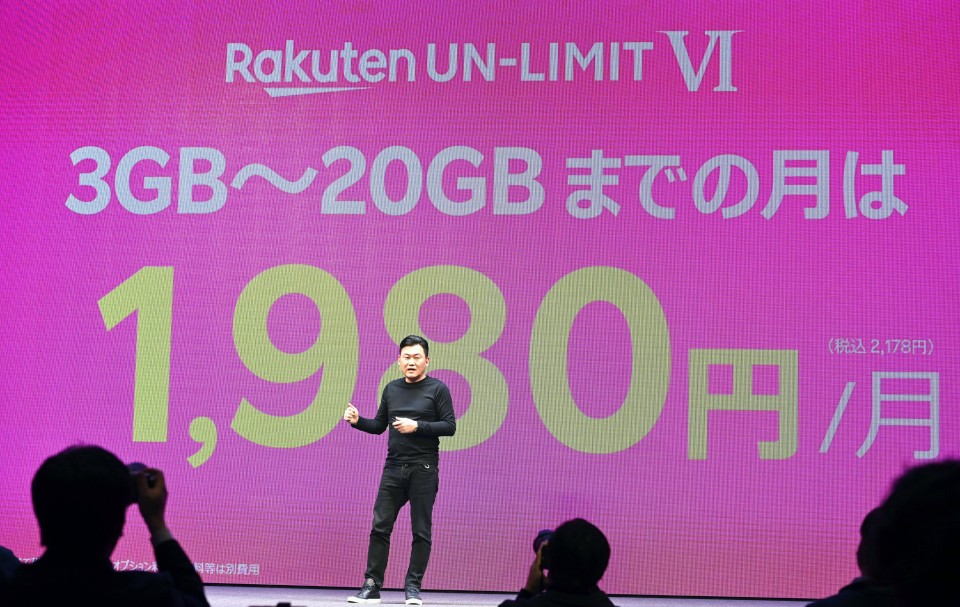 KDDI Corp., the operator of "au" brand, said earlier in the month it would offer a plan for similar data usage without free voice calls for 2,480 yen.

Rakuten's wireless carrier unit Rakuten Mobile Inc., a new market entrant, said Friday it will introduce a phased single-fee plan on April 1 -- charging no fees for usage up to 1 gigabyte of data per month, and 980 yen for data usage of up to 3 gigabytes.

The new fees will be automatically applied in accordance with data usage without subscribers having to apply, the company said. Domestic calls will be free of charge if they are made using a Rakuten Mobile app, it added.

The unit will also continue providing unlimited data usage over 20 gigabytes per month, employing ultrafast 5G networks in some areas, for 2,980 yen per month.

"Our mission is to offer the best service fee plans for all people in Japan," Rakuten Mobile Chairman and CEO Hiroshi Mikitani said in an online press conference.

Rakuten's new price plan targets people who use a small amount of data as part of efforts to boost the number of its subscribers.

A telecommunications ministry survey showed 49.5 percent of users subscribing to the country's four major carriers currently use up to 2 gigabyte data per month, while only 11.3 percent consume data of 20 gigabyte or more.

"We are committed to offering connectivity for those who think smartphone fees are too expensive," Mikitani said.

Japan's three major wireless carriers announced between December and January that they will slash charges for heavy data users after Prime Minister Yoshihide Suga, who took office in September, repeatedly asked them to reduce fees, pointing out that they charge much more than companies in other countries.

Chief Cabinet Secretary Katsunobu Kato on Friday welcomed Rakuten's move. "We understand a full-scale competition has started, and it will be beneficial for subscribers," Kato said at a press conference, referring to a series of announcements by wireless carriers to cut their charges.

In April last year, Rakuten started offering customers incentives such as a year of free service when it rolled out its own full-fledged mobile 4G phone service. The company has so far accepted over 2.2 million applicants and will continue offering the year of free service until it hits its target of 3 million customers, even after its new fee plan is launched in April.

Mikitani said the company will also start a "space mobile" project to provide wireless communications across Japan via satellite, which would not be subject to disruptions caused by natural disasters, as early as 2023.