A documentary film detailing Sadako Sasaki, an iconic figure in Hiroshima whose life in the aftermath of the atomic bombing of the western Japan city in World War II inspired many stories about wishes for peace, is in the process of production, her family said recently.

Sadako, who died at age 12 of radiation-induced leukemia 10 years after the Aug. 6, 1945, bombing, set out to a challenge while in a hospital bed to fold a thousand paper cranes after she learned of the legend that doing so will make a wish come true. 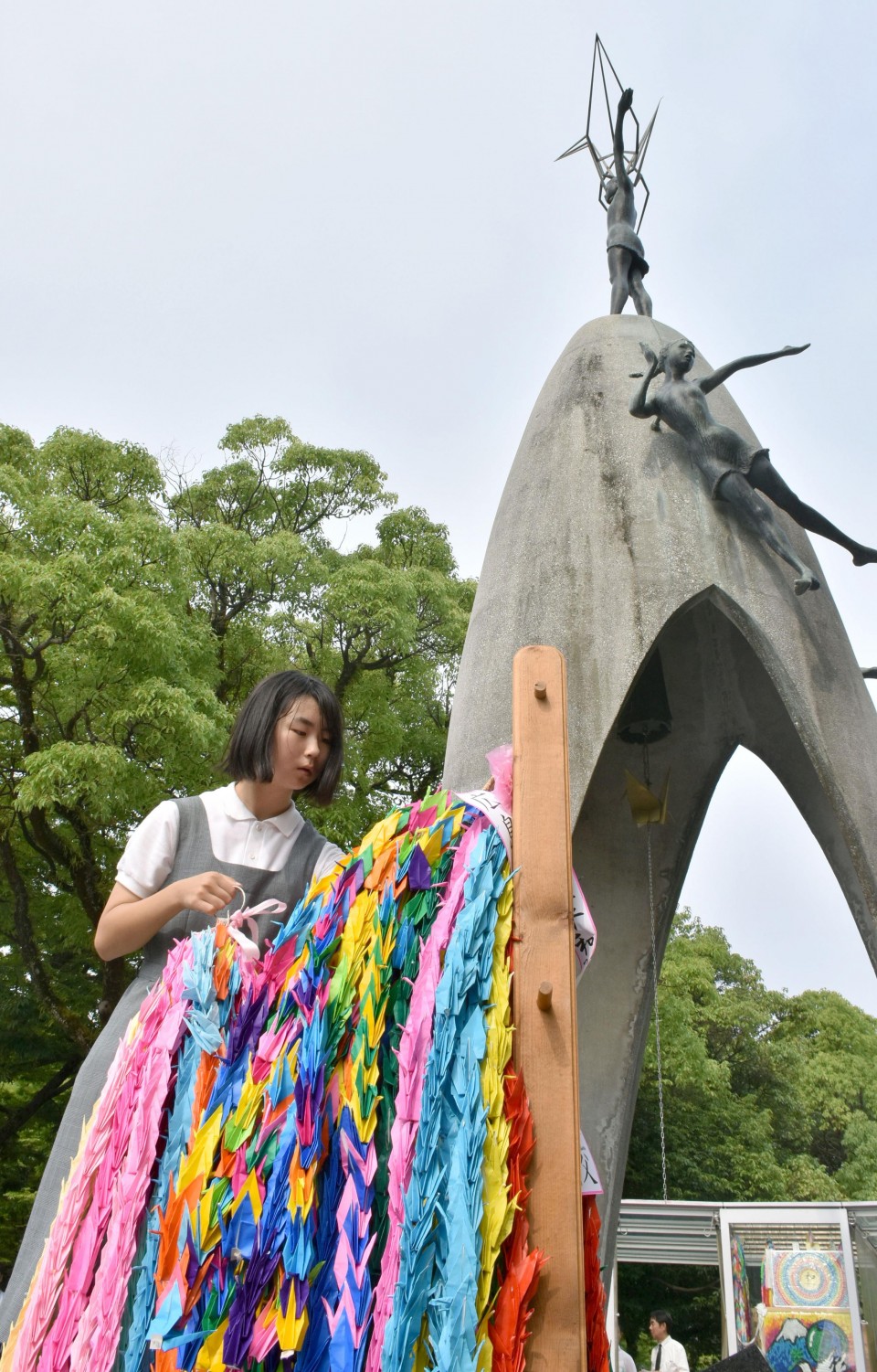 A junior high school student offers paper cranes, a symbol of hope in Japan, at the Children's Peace Monument in the Hiroshima Peace Memorial Park in the atomic bombed city of Hiroshima on July 25, 2017, during an annual commemorative ceremony. The monument is modeled after Sadako Sasaki, an A-bomb victim who folded paper cranes until her death at 12. (Kyodo) ==Kyodo

Although it is said she completed over a thousand of the origami cranes, her prayer for getting well was not answered. The inscription at the foot of a memorial statue modeled after Sadako in Hiroshima Peace Memorial Park near the epicenter of the bombing reads, "This is our cry. This is our prayer. For building peace in this world."

The statue was built in 1958 after a call by her classmates drew donations across the country. It stands to this day as a monument to all the children who died from the bombing and receives visitors from around the world.

Provisionally titled "Orizuru no Kiseki" (The Miracle of the Paper Cranes), the film was conceived by Sadako's nephew Yuji Sasaki, a 50-year-old songwriter based in Tokyo, to mark the 80th anniversary of the beginning of the Pacific War between Japan and the United States that broke out on Dec. 7, 1941, with Japan's surprise attack on Pearl Harbor.

The film follows the footsteps of Sadako as well as her brother Masahiro, who is now 79, and other children who were subjected to the bombing. It also features the friendship bridge built between Japan and the United States through Sadako's story, the family said.

The film also depicts the harsh experience that surrounded Sadako's parents. They were forced to move to Fukuoka after facing unfounded criticism they were making money out of their daughter's death as her story was reported in newspapers and other media.

Yuji Sasaki said Sadako's parents kept away from books and films dealing with her tragic situation.

"By showing the family's pain behind Sadako's tale as well, I want to make it the sort of film that helps the audience consider what mindset would build peace," he said.

The film, in production since last September, is expected to be released in summer 2022. It is partly funded by donations and a crowdfunding campaign, which is still running at https://readyfor.jp/projects/orizuru-kiseki.

If the coronavirus situation allows, Yuji Sasaki said he and the crew will film a ceremony to commemorate the victims of the Pearl Harbor attack in Honolulu, Hawaii, slated for December, as part of their upcoming title.