The Brazilian midfielder entered in the 67th minute at Tokyo's National Stadium and broke a 1-1 deadlock seven minutes later as FC Tokyo secured their third league cup title and their first since 2009.

Man of the match Leandro opened the scoring for FC Tokyo in the 16th minute, but Yusuke Segawa equalized in the final moments of the first half for a resurgent Kashiwa.

Originally slated for Nov. 8, the tournament decider had been postponed for the first time in history after several Kashiwa players and staff, including manager Nelsinho, tested positive for the coronavirus.

FC Tokyo had the early run of play as they looked to control possession and deny service to Kashiwa goal machine Michael Olunga, this season's J-League MVP who netted 29 times across all competitions. 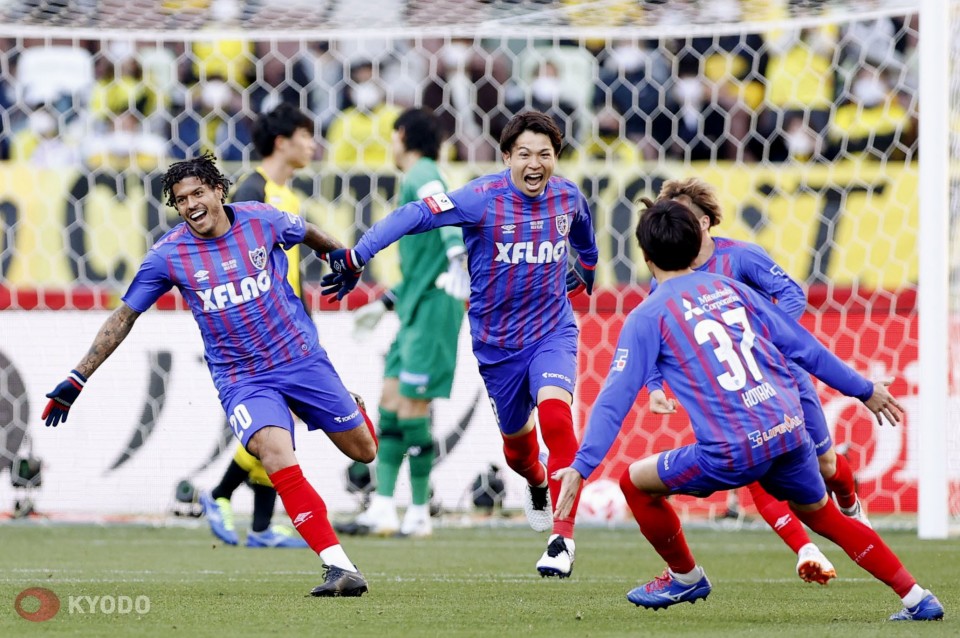 Leandro (far L) celebrates with his FC Tokyo teammates after opening the scoring in the Levain Cup final in Tokyo on Jan. 4, 2021. (Kyodo)

Leandro gave FC Tokyo the lead with a sterling individual effort, storming down the left flank and across the area before driving a low strike past Kashiwa keeper Kim Seung Gyu.

The South Korea custodian was on his toes later in the half, stopping a headed attempt from Kensuke Nagai and a long-range strike from FC Tokyo captain Keigo Higashi.

Segawa equalized from a comical set play sequence, tapping home after FC Tokyo keeper Go Hatano, impeded in a goalmouth scramble, could only prod at the ball after it flew high off the back of intended corner-kick target Olunga.

Kashiwa almost took the lead from a set play in the 59th minute, when Naoki Kawaguchi grazed the top of the bar with a volleyed strike from the edge of the box. Leandro hit the woodwork at the other end four minutes later, coming within inches of a spectacular long-range free kick goal.

Adailton needed just one touch to net the winner, outracing two defenders and jabbing into the net after Nagai directed a header to the middle of the area.

Leandro paid tribute to his teammates, including star forward Diego Oliveira, who missed the match after being injured during the Asian Champions League in November.

"It's a shame Diego is back in Brazil, and can't be here, and it's unfortunate for some of the other guys who didn't get to play today, but I'm very happy we were able to win," Leandro said.

The final at the 60,000-seat National Stadium was attended by 24,219 spectators, according to the J-League.

Following a resurgence in coronavirus infections, the Japanese government reintroduced a 5,000-spectator limit for Tokyo's venues with capacity of more than 10,000 until Jan. 11 but made allowances in cases where tickets had already been sold.