Japanese Prime Minister Yoshihide Suga apologized Wednesday in parliament after executives of the ruling coalition were reported to have visited hostess bars in Tokyo's posh Ginza district late at night, defying a state of emergency that urges people to avoid unnecessary outings, especially in the evening.

The revelations come at a time when the government is considering extending the state of emergency, which also entails asking restaurants and bars to shorten their opening hours, by about a month from its current scheduled end Feb. 7. 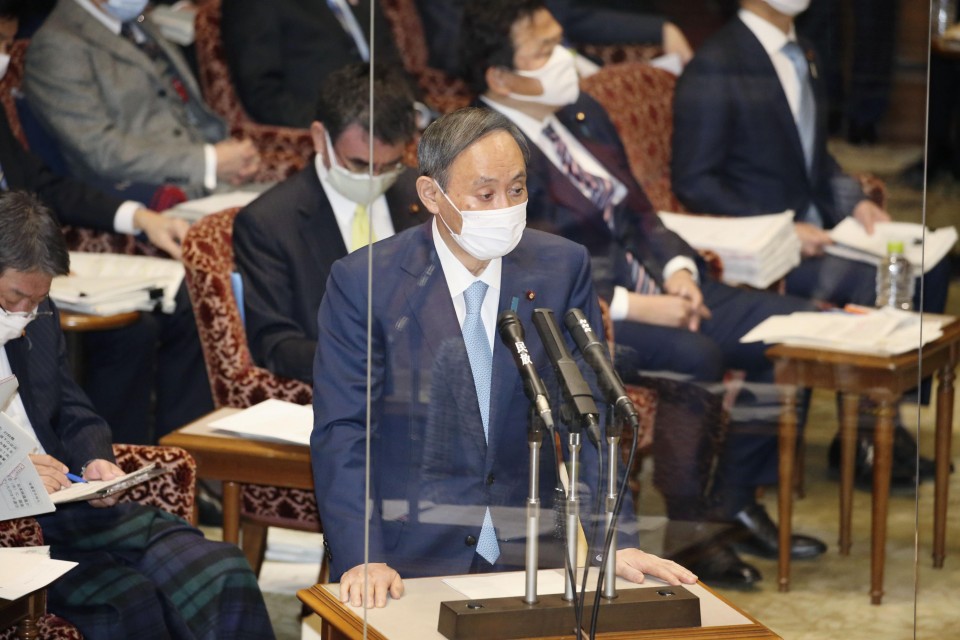 Japanese Prime Minister Yoshihide Suga speaks during a House of Councillors budget committee session in Tokyo on Jan. 27, 2021, with a transparent acrylic screen set in front of him to prevent coronavirus infection. (Kyodo) ==Kyodo

"As we have asked the people to refrain from going out, I am extremely sorry," Suga said at the House of Councillors' Budget Committee.

According to a report published online by the weekly magazine Shukan Shincho, Matsumoto on Jan. 18 left a restaurant before 9 p.m. and went to two hostess bars in Ginza until around 11:20 p.m.

Another weekly magazine, Shukan Bunshun, reported Toyama made a visit to a hostess bar in Ginza late Friday evening.

Under the state of emergency, people are being asked to stay home and restaurants to close by 8 p.m.

Suga himself came under fire after taking part in two dinner gatherings in Tokyo in mid-December while the government was urging people to refrain from eating in large groups to contain the spread of the virus.

He later apologized over the gatherings, first at a luxury hotel with about 15 people and then at an upscale steakhouse with a total of eight people present.

The central government declared a state of emergency for Tokyo and three adjacent prefectures on Jan. 7 and expanded its scope to seven more prefectures including Osaka, Aichi and Fukuoka six days later.

Sources have said the state of emergency could remain in place until the end of February, with a growing number of people in the administration and the ruling coalition deeming it necessary to extend it for the parts of the country continuing to see a high number of coronavirus cases.

Shigeru Omi, the head of the government's subcommittee on the pandemic, said at the same Budget Committee meeting that he expects to see the effect of the state of emergency start surfacing later this week though early next week.

Suga suggested, meanwhile, that the resumption of the government's much-touted "Go To Travel" subsidy program for promoting domestic tourism is not yet in sight. The campaign, which effectively covers up to half of people's travel expenses, was halted on Dec. 28 amid a resurgence of the virus.

Suga told the upper house committee the campaign will not restart without public understanding, while stressing the government is "united in the fight to prevent the spread of the novel coronavirus."

The government included in its 19.18 trillion yen ($185 billion) supplementary budget plan for fiscal 2020 more than 1 trillion yen for the program, with Suga saying the previous day it is necessary to prepare for its "resumption at an appropriate time."

Opposition parties have criticized the move, saying more financial support should be offered instead on helping medical workers and people affected.