Japan to expand virus emergency to 7 prefectures beyond Tokyo region

Japan is set to expand a state of emergency declared over the coronavirus pandemic to seven additional prefectures beyond the Tokyo metropolitan area amid a resurgence of infections in those regions, government officials said Tuesday.

The seven are the prefectures of Osaka, Kyoto, Hyogo, Aichi, Gifu, Fukuoka and Tochigi, with the government set to include them in areas subject to the declaration on Wednesday. 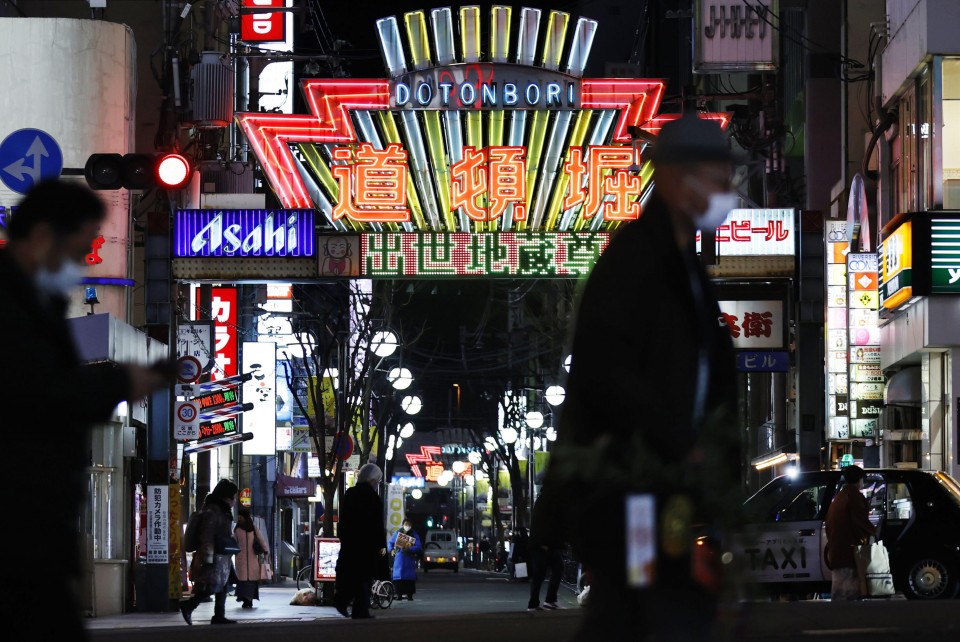 Government sources said earlier that Prime Minister Yoshihide Suga was planning to declare a new state of emergency in the three western Japan prefectures of Osaka, Kyoto and Hyogo -- Japan's second-largest metropolitan area -- as well as Aichi and Gifu in central Japan on Wednesday.

Effective from last Friday through Feb. 7, the emergency covers Tokyo and three neighboring prefectures of Chiba, Kanagawa and Saitama.

In a meeting of executives of Suga's ruling Liberal Democratic Party on Tuesday, the prime minister was quoted by an LDP lawmaker as saying he wants to make a decision "swiftly" about expanding the emergency after taking into account developments on infections and views from health experts.

The resurgence of infections since November last year has been increasing the strain on the country's medical system. Nationwide, the daily increase hit a fresh high of around 7,900 last Friday, with Osaka, Kyoto and Hyogo all reporting record new infections the same day.

According to government sources, final arrangements are being made for Suga to declare a new state of emergency in the three western Japan prefectures, as well as Aichi and Gifu, on Wednesday.

The central government is also considering including Tochigi Prefecture, north of Tokyo, and the southwestern Japan prefecture of Fukuoka in the declaration, the sources said.

Under the state of emergency, people are urged to stay at home as much as possible, and restaurants and bars are requested to shorten opening hours. There is no punishment for those who fail to comply, unlike actual lockdowns imposed in some other countries.

Japanese Prime Minister Yoshihide Suga (C) attends a meeting of Liberal Democratic Party executives in Tokyo on Jan. 12, 2021. Suga plans to declare a coronavirus state of emergency, already in place in Tokyo and three of its adjacent prefectures, for Osaka, Kyoto and Hyogo prefectures as early as Jan. 13, in response to a recent surge in virus infections. (Kyodo) ==Kyodo

But the central government at a meeting Tuesday outlined proposed revisions to the special law, enacted last March to better respond to the coronavirus outbreak, to allow for stronger preemptive measures to be enforced even before a state of emergency is declared.

The revisions include giving governors the power to order businesses take preventative measures, and to levy administrative fines on those that do not comply.

The government aims to submit the bill for the amendments to a parliamentary session to be convened next Monday, and have them approved as soon as possible.

On Tuesday, over 4,500 new cases were confirmed across the country, lower than in recent days. Tokyo confirmed 970 additional cases of the virus, marking the first time since Jan. 4 that the figure has slipped below 1,000, while Osaka reported 374 new cases, also the lowest figure since Jan. 4.

The prefecture, which logged a record 654 cases on Friday, appeared to be containing the spread of the virus at year-end but reported record weekly infections of more than 3,800 new cases in the week through Monday. Kyoto and Hyogo prefectures have also been reporting record-high daily figures.

Ahead of the expected expansion of the state of emergency, Hyogo Prefecture requested restaurants and bars in parts of the prefecture to close by 9 p.m. Osaka and Kyoto prefectures, meanwhile, have extended the duration of, or are revising, similar requests for shortened operations by such establishments.

Osaka Gov. Hirofumi Yoshimura said he will extend requests to close an hour earlier than presently to the entire prefecture from Thursday to Feb. 7, putting in place the same measures as the Tokyo metropolitan area.