Eighty percent, or 38, of Japan's 47 prefectural capitals have raised concerns about whether they have enough doctors and nurses to vaccinate residents against the novel coronavirus as the nation prepares to start vaccinating the population in late February, according to a Kyodo News survey released Saturday.

In multiple answers, 30 capital cities cited securing vaccination sites such as gymnasiums as a major challenge for the planned vaccinations, the survey showed. 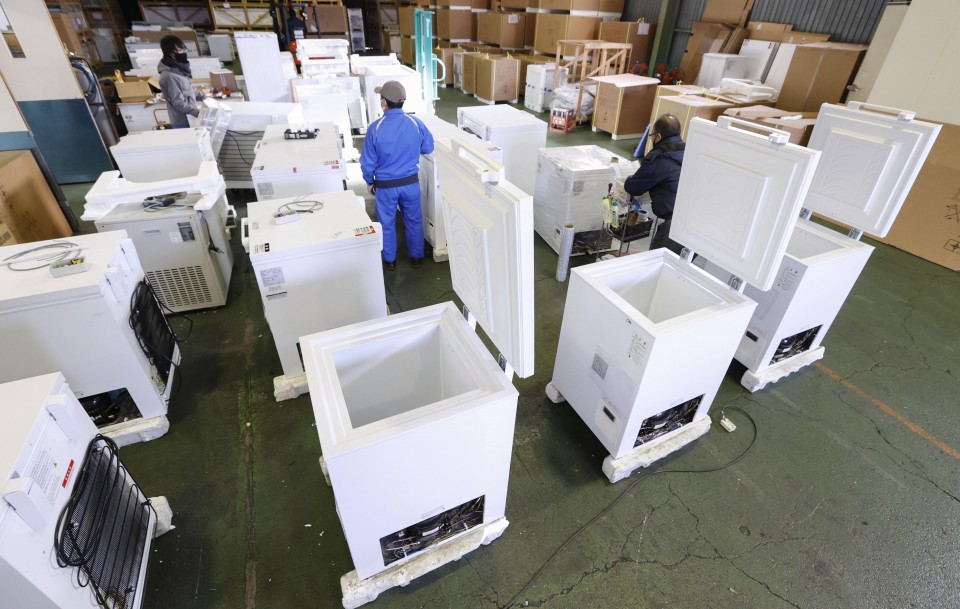 Ultracold freezers for COVID-19 vaccine storage are pictured Jan. 13, 2021, at a company in Sagamihara, near Tokyo, before their shipment. (Kyodo)

As other challenges, 18 referred to fiscal resources for vaccinations and 16 cited the difficulty in managing anti-COVID-19 vaccines with freezers.

Five cities -- Morioka, Toyama, Kofu, Kochi and Miyazaki -- said they may have to delay the start of vaccinations.

Vaccinations are slated to begin in Japan by late February, starting with medical workers, followed by people aged 65 or older from late March, and then people with preexisting conditions and those caring for the elderly.

Government sources have said the general population is expected to become eligible for vaccinations from around May.

According to the survey conducted on Thursday and Friday, Tokyo and 43 prefectural capitals said they have launched or plan to set up task forces or teams to oversee vaccinations.

Saitama, Kyoto and Osaka said they expect more than 90 percent of residents of their respective cities to take vaccinations, while 11 other cities such as Yamagata, Kanazawa, Kobe and Oita referred to rates of 60 to 80 percent.

The remaining 33 cities said they have yet to have such estimates.

Asked what prefectural capitals want from Prime Minister Yoshihide Suga's government, Sapporo, the capital of Hokkaido, said, "We don't know at all when, how many and what kind of vaccines will be shipped, so we cannot make plans (for vaccinations)."

Citing worries about vaccinating elderly people, Fukui urged the government "to communicate accurately (about vaccines) after fully confirming their safety and effectiveness."

Kyoto cited concerns about costs related to vaccinations, saying the city will have to shoulder considerable expenditure on personnel, venues and transportation even with subsidies from the government.