The seasonally adjusted index of sentiment among households made up of two or more people fell 2.2 points from the previous month to 29.6, the second straight month of declines, following a 1.9 point drop in December, according to the Cabinet Office. 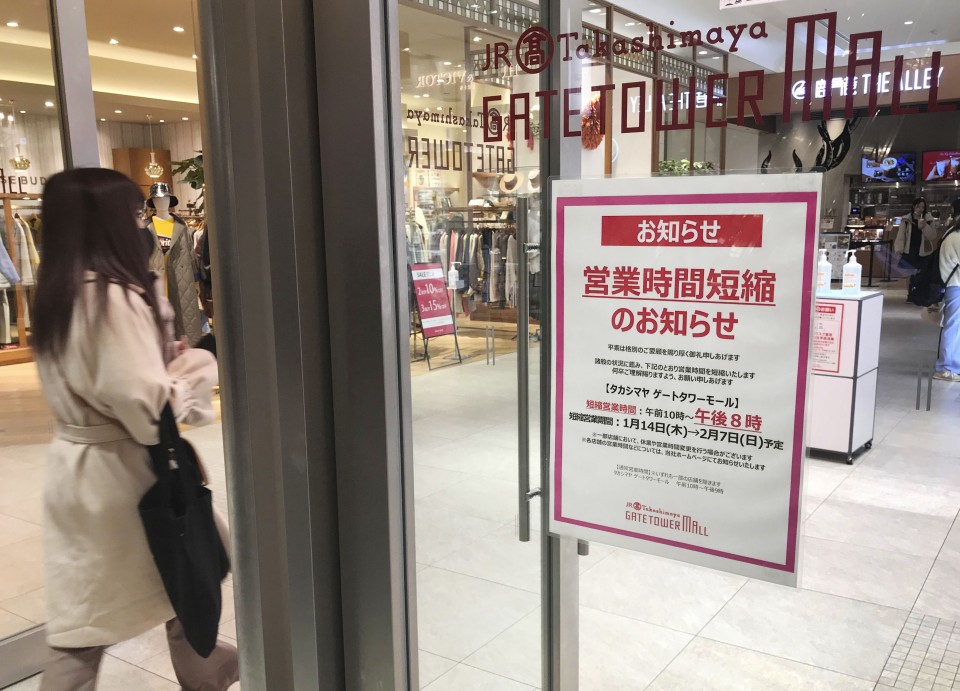 A sign announcing shortened business hours at an entrance of a high-rise shopping mall in Nagoya is pictured Jan. 18, 2021. (Photo courtesy of JR Tokai Takashimaya Co.)(Kyodo)

The 2.2 point slide was the fourth-largest decline since comparable data became available in April 2013, the office said, adding it downgraded its basic assessment for the second month in a row noting consumer sentiment was "weakening." The office said in December that sentiment had been "stalling."

With the country facing its third wave of virus infections since mid-November, Prime Minister Yoshihide Suga declared the country's second state of emergency covering the Tokyo metropolitan area on Jan. 7 and was expanded to 11 prefectures on Jan. 13. The survey was conducted from Jan. 7 to 20.

"We believe that developments over the virus infections, including the emergency declaration, dampened consumer sentiment," a government official told reporters, adding that the impact of the declaration was not as remarkable as that of the first one issued in April last year and effective through May.

The index in April plunged 9.3 points to hit a record low of 21.6 due to the first emergency issued for Tokyo and six other prefectures but later expanded nationwide. At that time, the declaration requested that people stay home and non-essential businesses suspend operations.

The ongoing declaration, which is set to end on Feb. 7 but could be extended, is less comprehensive than the previous one, mainly requesting that restaurants and bars shorten business hours.

The index gives an indication of consumers' economic expectations for the coming six months, with a reading below 50 suggesting pessimists outnumber optimists.

The survey covered 8,400 households, including 2,688 single-member households, with valid responses received from 7,452, or 88.7 percent.