Japanese forward Yoshinori Muto won a penalty to help Eibar take a lead but runaway La Liga leaders Atletico Madrid came back to secure a late 2-1 win on Thursday courtesy of a brace from Luis Suarez.

Starting alongside compatriot Takashi Inui, Muto had his foot stamped on by Yannick Carrasco as he chased a pass inside the area and goalkeeper Marko Dmitrovic stepped up to score the penalty for the home side after 12 minutes at Estadio Municipal de Ipurua. 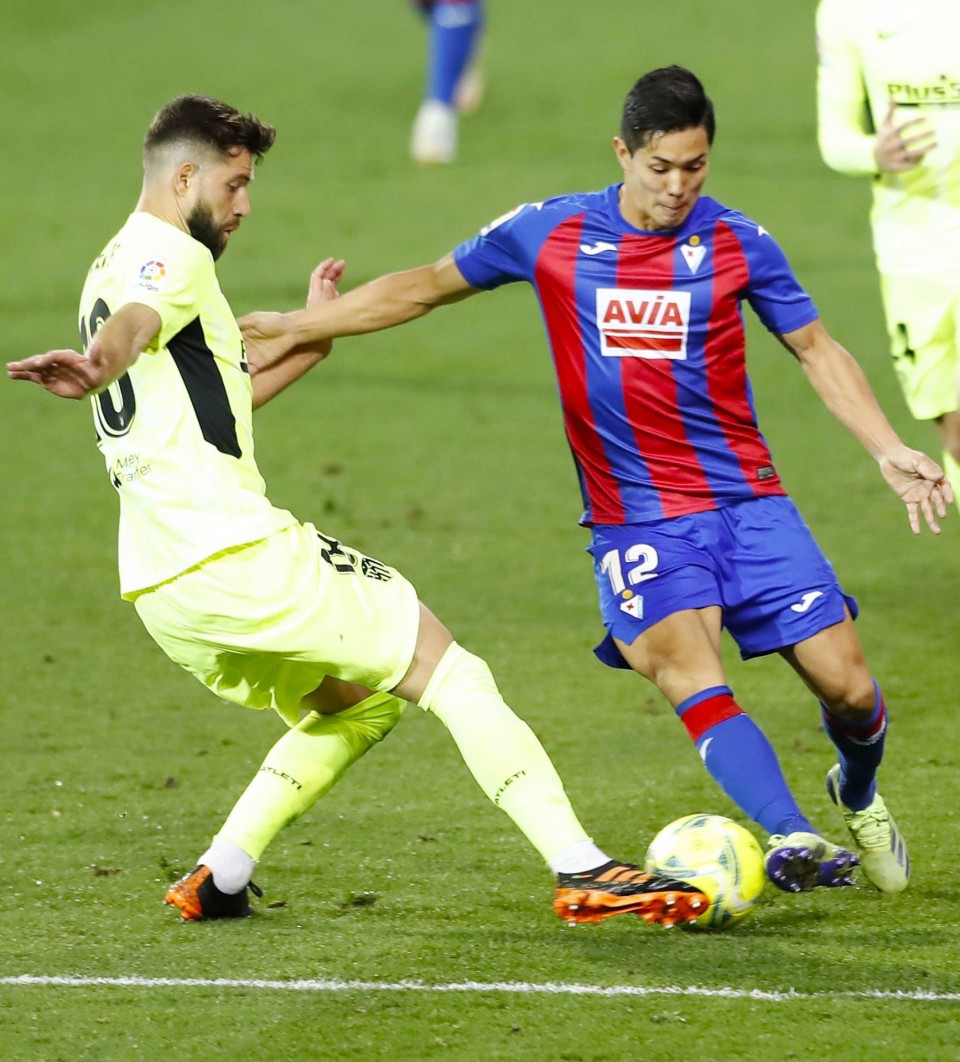 Eibar forward Yoshinori Muto (R) vies for the ball during a La Liga match between Eibar and Atletico Madrid on Jan. 21, 2021. (Kyodo)

But a mistake from defender Sergio Alvarez saw Suarez slot home from a tight angle in the 40th minute before the Uruguay star also won a penalty and converted it himself in the 89th minute for Atletico, who are seven points clear of Real Madrid at the top of the table.

While Muto came off in the 77th minute, Inui played the entire game on the left of the midfield and almost set up Kike Garcia in the 50th minute with a low cross, but the forward steered the ball narrowly wide of the post.

In England, Japan forward Takumi Minamino came on as an 84th-minute substitute for his first Premier League action in five games but could not help Liverpool avoid a shock 1-0 home defeat to Burnley that ended a 68-match unbeaten run at Anfield.

Minamino netted his first league goal in a 7-0 away hammering of Crystal Palace on Dec. 19 but had been overlooked by manager Jurgen Klopp for the next four games, during which the reigning champions had three draws and one defeat, scoring just once in the period.

Belgian forward Divock Origi hit the bar late in the first half in Liverpool's best chance when he was clean through with just the keeper to beat.

Ashley Barnes won and converted the winning penalty for Burnley right before the introduction of Minamino. The goal handed Liverpool their first home defeat since April 2017.