A former Self-Defense Forces member accused of killing a police officer in 2018 in central Japan and then shooting dead a security guard at a nearby school with the officer's gun did not originally plan to take the weapon, his defense team argued Thursday in court.

Keita Shimazu, 24, who was a part-time restaurant worker at the time of the attack, is facing a charge of murder-robbery in connection with the stabbing of Kenichi Inaizumi, 46, at a police box in the city of Toyama, and theft of his handgun on June 26, 2018. 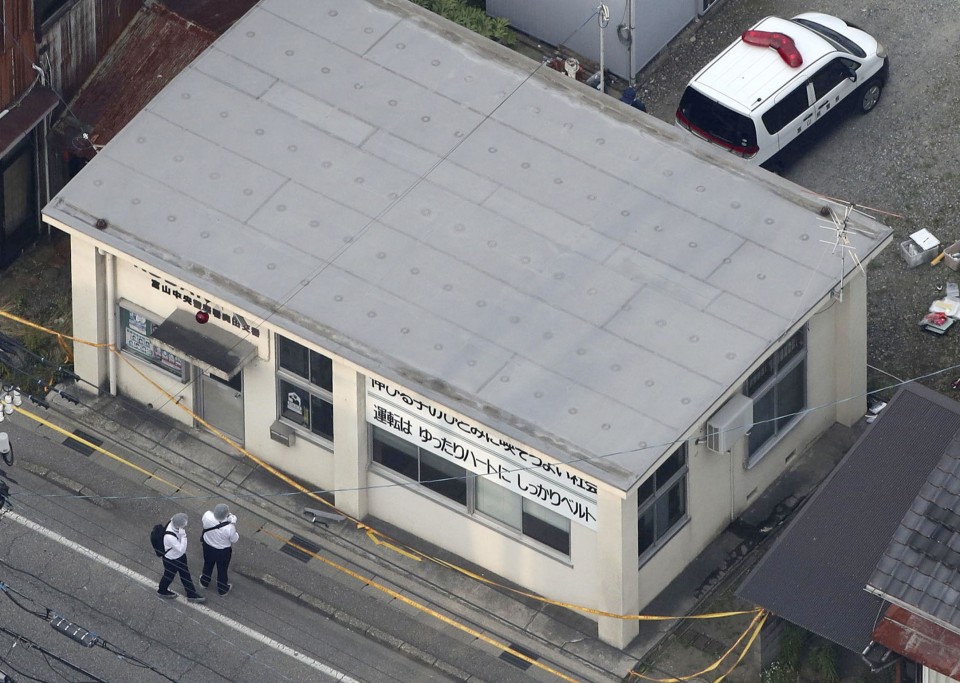 File photo taken on June 26, 2018, shows a police box in the city of Toyama, where an officer was stabbed to death and a handgun was stolen.(Kyodo)

"His intention to steal the handgun arose after the killing," one of his lawyers said at the first hearing of Shimazu's trial, arguing that he should face separate murder and theft charges instead over the assault on the officer, who was chief of the police box.

Shimazu attended the hearing at the Toyama District Court but refused to speak, declining to identify himself or submit a plea to the charges.

He was sitting in a wheelchair, having been paralyzed from the waist down with a spinal cord injury after being shot by a police officer prior to his capture.

Prosecutors said Shimazu had a history of reclusive behavior from his junior high school days and was violent toward his parents.

They argued that he developed a feeling of hatred toward the police when officers visited his house in connection with his violence.

Growing desperate after assaulting the manager of the restaurant where he worked earlier the same day, he "attempted to show off his power by achieving a victory over a police officer who was in possession of a gun," the prosecutors said.

In addition to the attack on Inaizumi, Shimazu has been charged with fatally shooting Shinichi Nakamura, a 68-year-old security guard at a nearby elementary school, with the gun he took from the officer, and shooting at another security guard there.

Although his mental competency was a major focus of the high-profile case, the prosecutors judged him to be criminally responsible after a four-month appraisal.

The court is scheduled to hand down its ruling on Shimazu, who served as a member of the Ground Self-Defense Force for two years through March 2017, on March 5.