The government is considering temporarily excluding Tokyo and Nagoya from its travel subsidy program to spur domestic tourism amid recent spikes in novel coronavirus cases in the cities, a governor who was presented with the plan said Sunday. 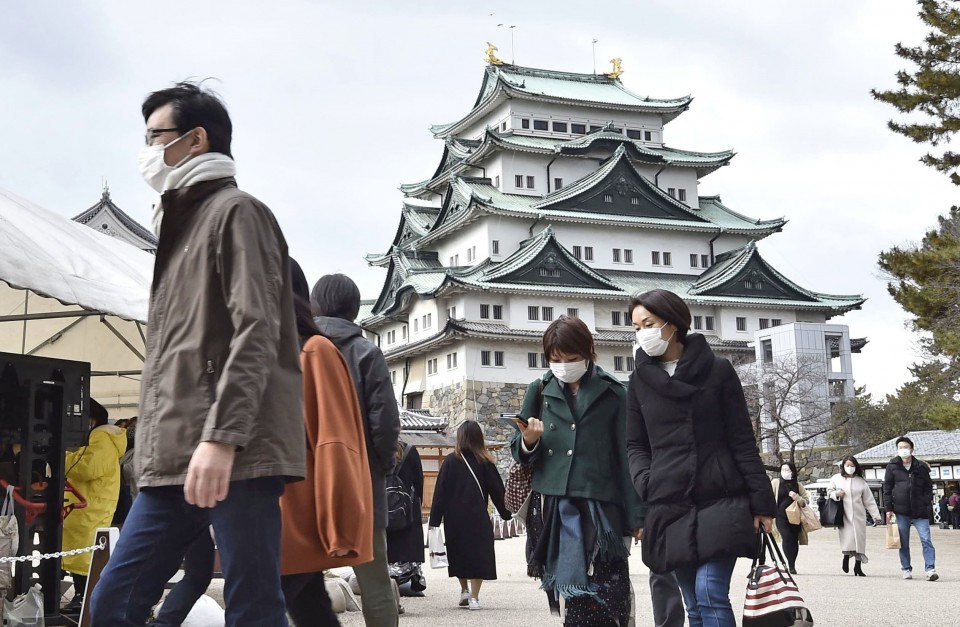 People wearing face masks visit Nagoya Castle in Nagoya, central Japan, on Dec. 13, 2020, amid the continued spread of the novel coronavirus in the country. (Kyodo) ==Kyodo

Hideaki Omura, governor of Aichi Prefecture of which Nagoya is the capital, revealed the plan in a TV program, after Prime Minister Yoshihide Suga discussed the option with Yasutoshi Nishimura, minister in charge of Japan's coronavirus response, and other Cabinet ministers.

The government is expected to make a final decision Monday on whether to suspend the "Go To Travel" campaign for trips to Tokyo and Nagoya, according to government sources.

"We will continue coordination," Nishimura said, without providing details.

Speaking in the TV program, Omura said Nishimura presented him with the plan as part of efforts to curb sharp increases in coronavirus cases across Japan.

Omura said Nishimura asked him to "consider Nagoya, along with Tokyo, for exclusion" from the travel promotion initiative, which effectively shoulders about half of domestic travel expenses to help the tourism sector weather the impact of the pandemic.

Tokyo confirmed 480 coronavirus infections, down from a record 621 cases the previous day but the highest number for a Sunday, when medical institutions typically do not provide non-urgent services.

In a related move, the government is also considering extending its suspensions from the initiative of trips to Sapporo on the northernmost main island of Hokkaido and the city of Osaka in western Japan beyond the end date of Tuesday, the sources said.

The development came after the government's subcommittee on anti-virus steps called Friday for the halt of the campaign in areas with rising cases amid concern that the movement of people prompted by the travel campaign has increased infections.

As Japan continues to grapple with the resurgence of infections, the number of cases across the country totaled 2,388 on Sunday, down from a record 3,041 on Saturday.

Tokyo's latest figure of 480 brought the number of total infections in the capital to 47,225. Among those hospitalized, 70 had developed serious symptoms, up two from Saturday.

In what some medical experts describe as a "third wave" of infections in Japan, the number of coronavirus cases has remained high in Tokyo, the hardest-hit of the country's 47 prefectures.

The Tokyo metropolitan government has requested restaurants, bars and karaoke establishments that serve alcohol to shorten their opening hours and close at 10 p.m. until next Thursday in most parts of the capital.

Hokkaido saw 164 infections on Sunday, with 82 cases confirmed in Sapporo, its capital city. Osaka reported more than 300 infections for a fifth consecutive day, including 308 cases logged on Sunday.