An increasing variety of technologies such as artificial intelligence, drones and high-quality 4K video cameras are being introduced in the field of security systems amid a serious shortage of personnel in the field.

A virtual "AI guard" developed by major Japanese security firm Secom Co. was tested at Ogikubo Hospital in Tokyo in late October. An animated guard character displayed on an electric panel at the hospital entrance takes visitors' temperatures and then asks those without fevers to enter the facility.

The character has been programmed to respond verbally to basic inquiries such as the location of bathrooms and information about bus timetables. It is also able to make eye contact with visitors and to lean down when approached by children or those in wheelchairs. 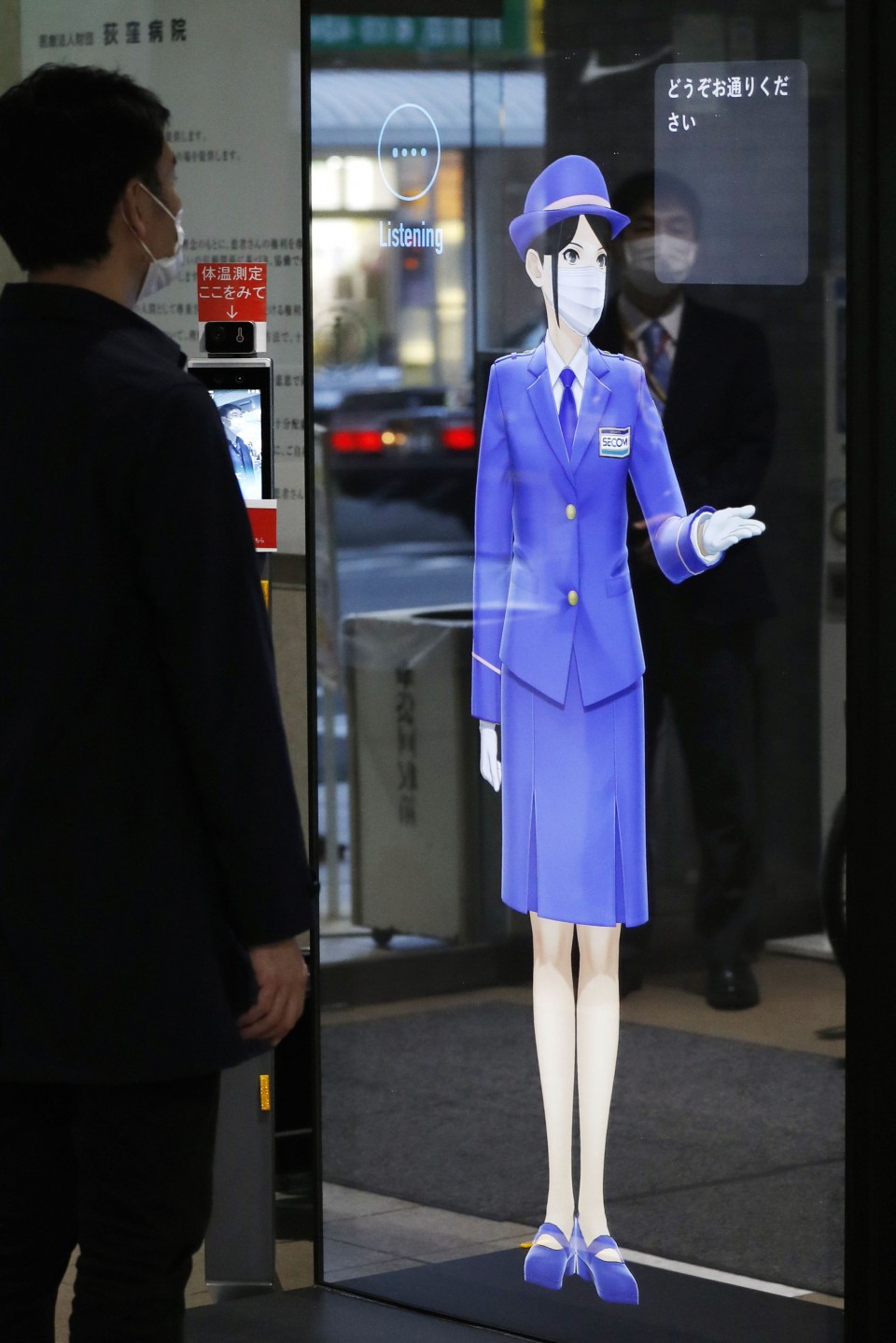 A virtual "AI guard" displayed on an electric panel welcomes visitors at Ogikubo Hospital in Tokyo on Oct. 28, 2020. (Kyodo)

A real-life guard is on standby at a separate location to monitor footage sent by the system's camera and rush to the scene to respond to any trouble.

The hospital currently stations two to three employees at the facility's entrance to conduct mandatory temperature checks and ensure visitors are wearing face masks to prevent the spread of the novel coronavirus.

After observing the system in action, the hospital's administrative director Hayato Kawamura said, "We may be able to move at least one employee to take care of other work."

The system can also be used to notify security guards of potential health incidents by alerting them to people crouching or falling over. Guards can then rush to the scene, bringing an automated external defibrillator (AED) in case of emergency.

The security firm has also been setting up high quality 4K cameras at such facilities as Tokyo Skytree tower, the tallest structure in Japan and a landmark in the Japanese capital, to test their ability to monitor the surrounding environment.

It is hoped the high-tech cameras with AI image recognition technology will be able to detect smoke rising from fires in distant areas as well as reckless drivers on a highway.

Meanwhile, a prison in Yamaguchi Prefecture in western Japan has been utilizing drones equipped with cameras from Secom to patrol the premises, using GPS to fly designated routes.

"4K, AI and 5G will become the three sacred treasures of security from now on," said an official of Alsok, referring to the three ancient treasures of the Japanese imperial regalia. The official said 4K would serve as the eyes, AI as the brains, and 5G ultrafast networks as the nerves.