Heavy snow along the Sea of Japan coast stranded around 1,100 cars on a highway Thursday and left more than 10,000 homes without electricity at one point, authorities said, prompting the Self-Defense Forces to be deployed for disaster relief.

Many people were forced to stay overnight in their vehicles as the year's most intense cold spell has disrupted road and train services since Wednesday. 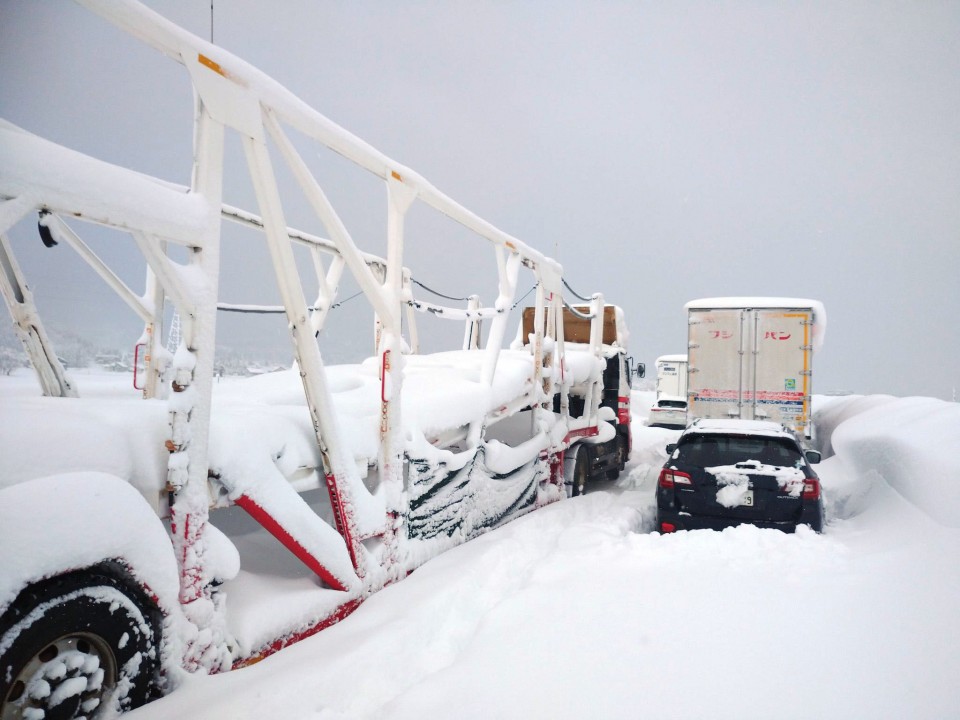 Vehicles are stranded on the Kanetsu expressway in Niigata Prefecture on Dec. 17, 2020.
(Photo courtesy of Yoshinobu Wakiya)(Kyodo) 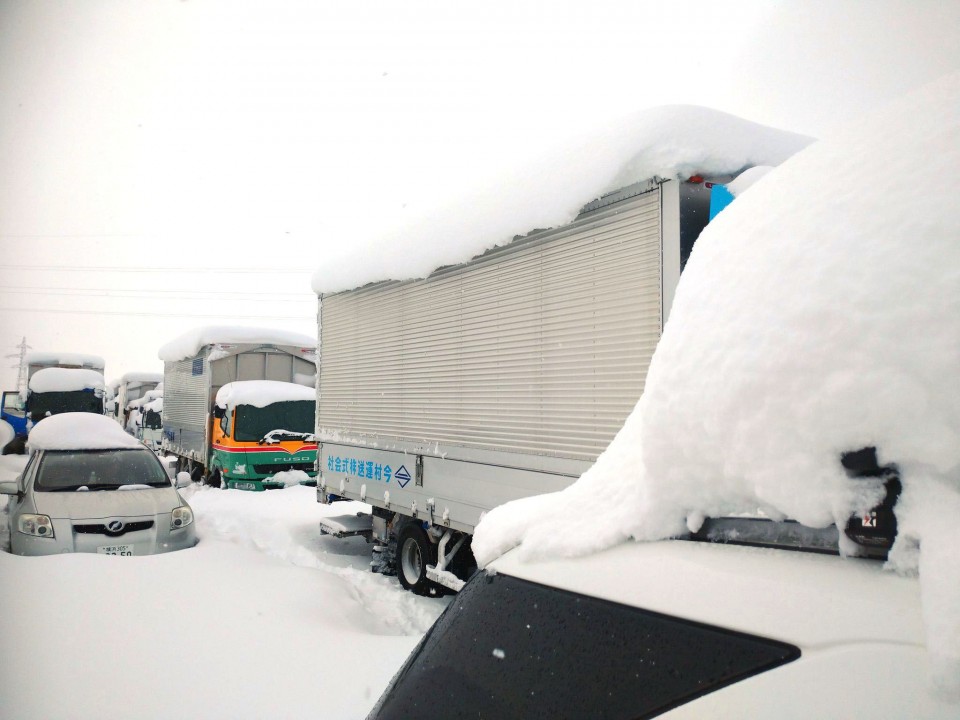 Vehicles are stranded on the Kanetsu expressway in Niigata Prefecture on Dec. 17, 2020.
(Photo courtesy of Yoshinobu Wakiya)(Kyodo)

The Japan Meteorological Agency forecast that heavy snow will continue to fall through Friday and warned that slippery roads could cause further traffic disruptions.

About 750 vehicles on the southbound lanes and 350 on the northbound lanes of the Kanetsu Expressway, which connects Tokyo and Niigata Prefecture, were stranded as of 4 p.m., police said.

According to the police and highway operator East Nippon Expressway Co., the line of cars stretched up to 16.5 kilometers at one point Thursday. The congestion was caused after a trailer got stuck in the snow near an interchange in Minamiuonuma, Niigata, on Wednesday night.

The government set up a task force and held an emergency Cabinet meeting in the afternoon, at which Prime Minister Yoshihide Suga said members of the SDF were headed to Niigata after a request from Gov. Hideyo Hanazumi.

The personnel will distribute food, fuel and blankets, and confirm the safety of those on the expressway, Chief Cabinet Secretary Katsunobu Kato said at a press conference. 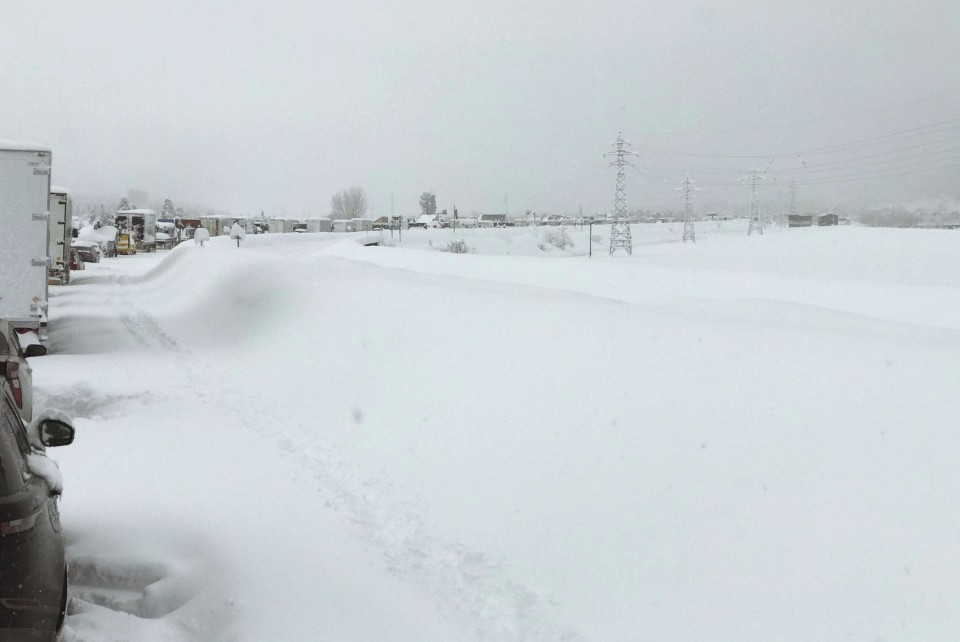 Vehicles are stranded on the Kanetsu expressway in Niigata Prefecture on Dec. 17, 2020.
(Photo courtesy of a driver)(Kyodo) 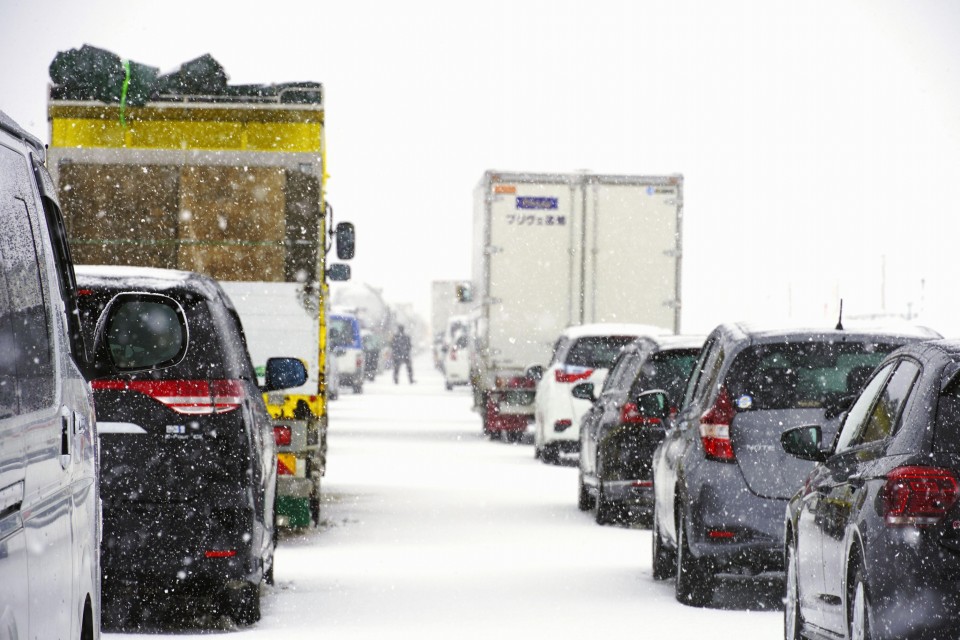 Vehicles are stranded on the Kanetsu expressway in Niigata Prefecture on Dec. 17, 2020. (Kyodo)

More than 10,000 households lost power in Niigata, stretching across the Sea of Japan coast, and Hyogo Prefecture in western Japan, among other places, Kato said.

At the Cabinet meeting, Suga called for people to be on alert for further possible traffic disruptions and damage as well as snow falling from rooftops and avalanches, and to keep an eye on weather forecasts and "make necessary preparations beforehand."

"I don't have any information. I want to know what the current situation is, and at around what time I will be able to get out of this," said a truck driver in his 40s from Niigata Prefecture, who spent the night stuck on the road in Gunma Prefecture.

Some 300 vehicles were stranded at one point on the Joshinetsu Expressway, which connects Niigata, Nagano and Gunma prefectures, after a truck became stuck Wednesday night. The gridlock lasted until around 10 a.m. Thursday.

East Nippon Expressway distributed food, water and portable toilets to drivers who were stranded on the expressways.

Some areas of the country have seen record levels of snow. Minakami in Gunma Prefecture had 217 centimeters over a 72-hour period to Thursday morning, while Yuzawa in Niigata Prefecture saw over 180 cm as of 8 a.m. 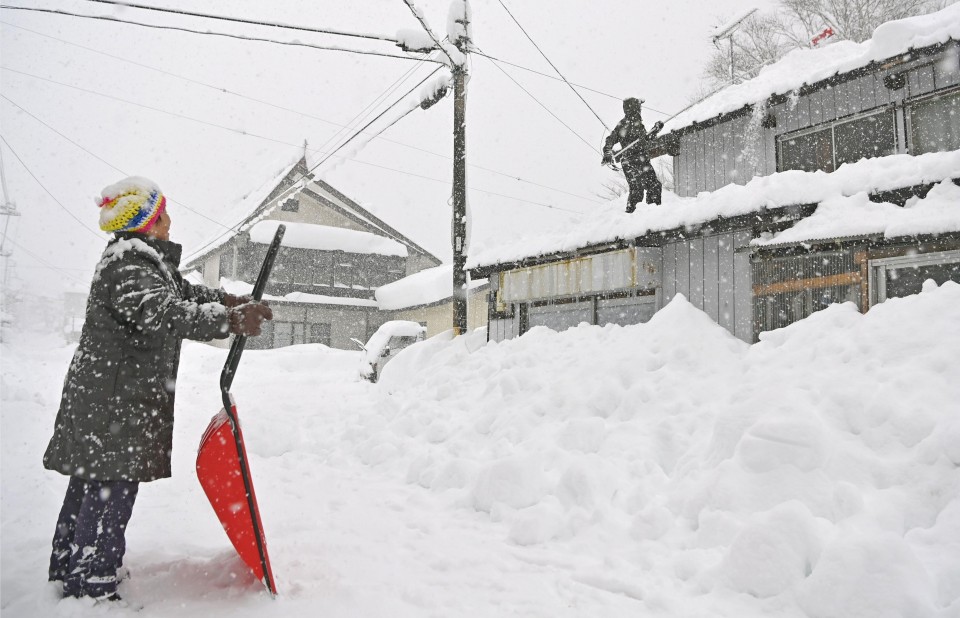 People try to remove snow from the roof of a house in Minakami, Gunma Prefecture, eastern Japan, on Dec. 16, 2020. (Kyodo) ==Kyodo