The Japanese government is tackling the latest surge in coronavirus infections with a "strong sense of crisis," Prime Minister Yoshihide Suga said Friday, adding that a rise in the number of severely ill patients has started to put a strain on hospitals.

"Protecting the lives and livelihoods of the people is the top priority of my administration," Suga said at a press conference, as he vowed to have a new stimulus package to deal with the fallout of the virus outbreak approved by his Cabinet next week. 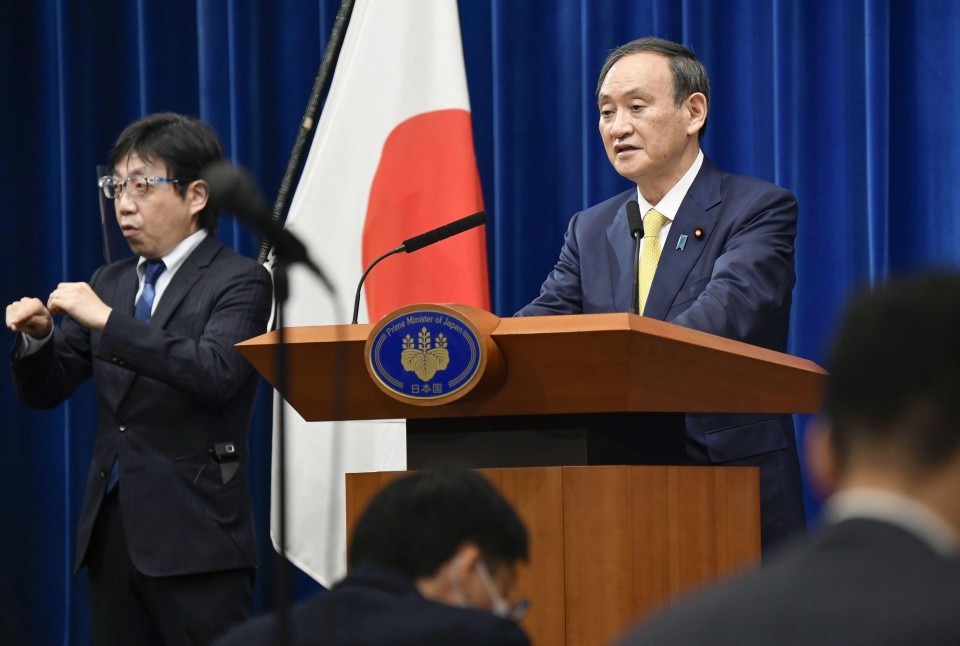 At the news conference held the day before the end of the current extraordinary Diet session, which started on Oct. 26, Suga asked the public to continue taking basic precautions against the spread of COVID-19 including wearing masks and washing hands, and said shorter hours for restaurants should help curb further outbreaks.

More than 2,400 new cases of infections were reported across the country the same day, while the number of those with severe symptoms surpassed 500 for the first time.

The government plans to decide next week on the new economic package including increased subsidies for medical institutions to help them secure more beds for novel coronavirus patients.

In the same press conference, Suga pledged to raise the amount of subsidies for prefectures, cities and towns which can be used to assist restaurants that shorten operating hours by 1.5 trillion yen ($14 billion).

He also said Japan will set up a 2 trillion yen fund to support the development of green technologies over the next decade as the country seeks to achieve carbon neutrality by 2050 and spur economic growth.

The prime minister vowed to secure more than 1 trillion yen in expenses related to digitalization including research and development for post-5G wireless communications technologies supporting cellular data networks so that Japan can "take the lead in the world in the next generation technologies."

"What our country needs is a source of growth in the post-corona (era). And green and digital (technologies) will serve as its axes," he said.

He called for developing hydrogen aircraft and vessels as well as low-cost batteries for electric vehicles while promoting carbon recycling, and attracting green investment from around the world.

The ruling and opposition parties agreed, however, to continue deliberations on antivirus measures even after the end of the session.

Suga was grilled by opposition parties during the current session after the scandal involving Abe's group emerged in late November, as he served as chief Cabinet secretary under Abe for nearly eight years before succeeding him in September and had defended the then leader over the matter during press conferences and parliamentary sessions.

Suga now plans to convene a regular Diet session on Jan. 18 and seek to dissolve the House of Representatives for an election after the budget for fiscal 2021 passes the parliament around late March, government sources said.

During the press conference, Suga did not give a date for the election, saying, "I will think about the time limit and give it thorough consideration."

A general election must be held sometime before the terms of lower house lawmakers expire on Oct. 21 next year.