Nagoya Grampus clinched third place and an Asian Champions League playoff berth with a 1-0 win over Sanfrecce Hiroshima on Saturday, the last day of the J-League top flight season.

Naoki Maeda struck the winner in the 86th minute of a closely fought battle at Toyota Stadium where each team had just two shots on target. 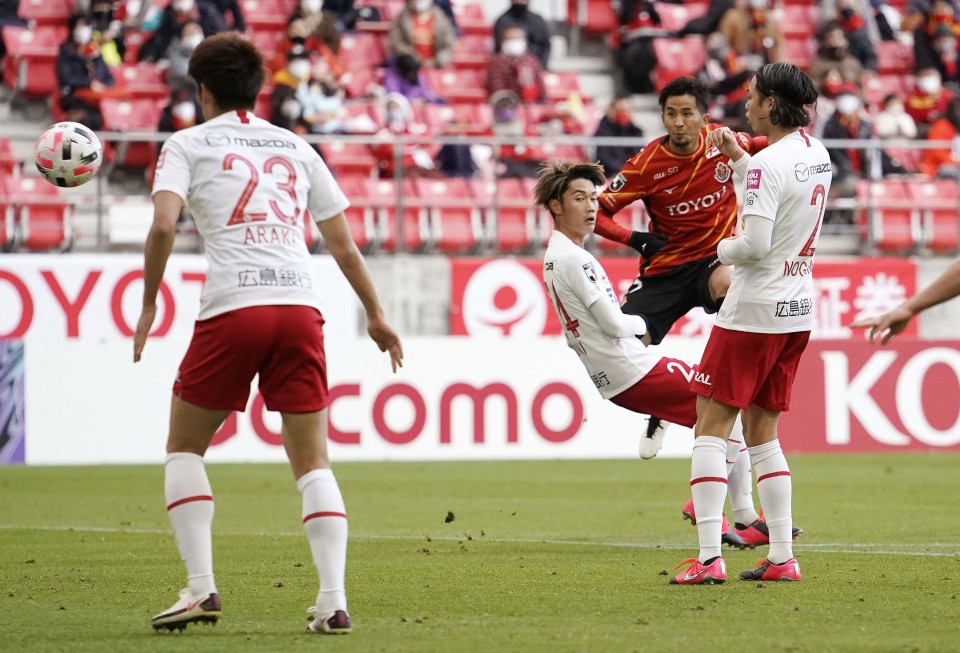 Nagoya Grampus winger Naoki Maeda (2nd from R) scores an 86th-minute goal to give his side a 1-0 victory over Sanfrecce Hiroshima in the last round of the J-League first-division season at Toyota Stadium on Dec. 19, 2020. (Kyodo)

Massimo Ficcadenti's squad ended the season on a six-match unbeaten run to edge Cerezo Osaka and Kashima Antlers in their race for third and a place in the ACL playoffs.

Nagoya started the day a point ahead of fourth-place Cerezo and two clear of fifth-place Antlers, who both stayed put in the standings after drawing 1-1 in their final match at Kashima Stadium.

Hiroshima almost took the lead in the 32nd minute when Douglas Vieira's header struck the crossbar from a corner kick.

Grampus keeper Mitch Langerak kept his side level late in the half with a diving save to deny Hayao Kawabe.

Nagoya found the winner after working the ball from the left touchline to the top of the box, where Ryogo Yamasaki laid off to Maeda for a stunning left-footed strike that flew into the top-left corner.

"I'm glad to have contributed the winning goal. Even when the team has been winning, I've felt frustrated by my own lack of contribution," said Maeda, who finished the season with six goals, four of which came in a 6-2 rout of Urawa Reds on Aug. 8.

"From here, we want to make sure we win our ACL playoff and advance to the tournament." 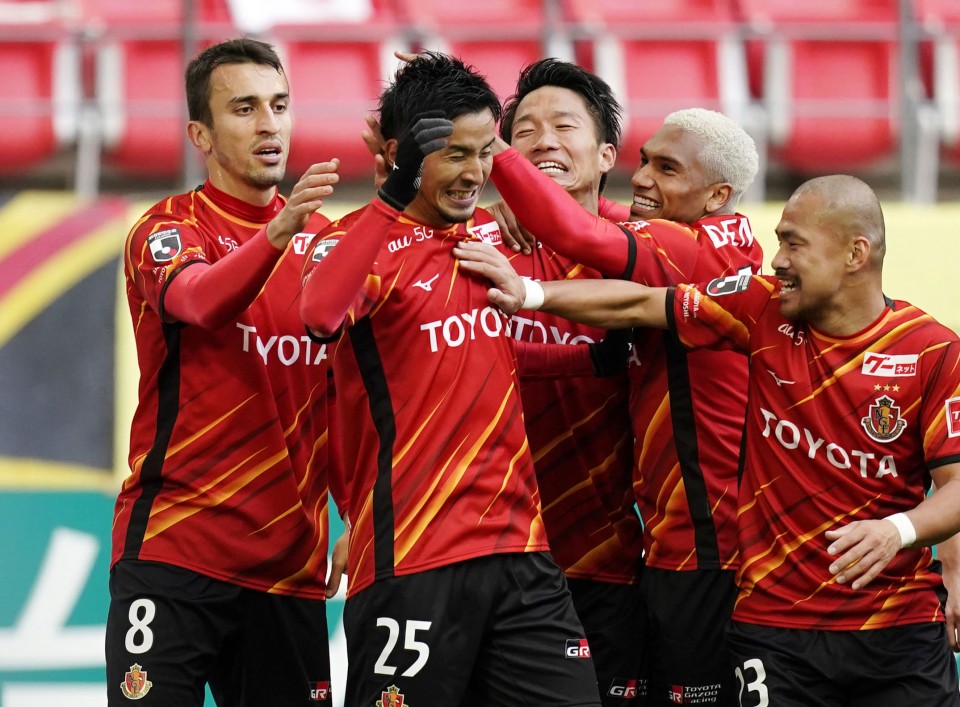 Nagoya Grampus winger Naoki Maeda (2nd from L) is congratulated by teammates after scoring the winning goal in his team's 1-0 victory over Sanfrecce Hiroshima in the J-League first division at Toyota Stadium on Dec. 19, 2020. (Kyodo)

This year's result marks a turnaround in fortunes for Nagoya, who finished 13th last season and made their most recent trip to the ACL in 2012.

At Kashima Stadium, Everaldo equalized for Antlers in the 90th minute, seven minutes after Riku Matsuda had given Cerezo the lead.

Elsewhere in the first division, Kawasaki Frontale stalwart Akihiro Ienaga struck twice in the second half as this year's J1 champions came back to beat Kashiwa Reysol 3-2 at Sankyo Frontier Stadium.

Kenya striker Michael Olunga extended his league-best tally to 28 goals after netting the opener for Kashiwa, who finished seventh in their first season following promotion back to the top flight.

Gamba Osaka, who wrapped up second place in midweek, lost 2-0 to visiting Shimizu S-Pulse, who climbed one spot to 16th.

At Ajinomoto Stadium, Joan Oumari scored in the 85th minute to give sixth-place FC Tokyo a 1-0 win against Vissel Kobe, who finished a disappointing 14th after parting ways with German manager Thorsten Fink in late September.

Fifteenth-place Yokohama FC ended their first season back in the top flight on a high note, with a 3-1 derby win over 2019 champions Yokohama F Marinos, who finished ninth.

Forward Kazuyoshi Miura, 53, extended his record as the oldest-ever player in a J1 match after appearing as a 90th-minute substitute for Yokohama FC.

Consadole Sapporo climbed to 12th with a 2-0 win away to eighth-place Urawa Reds, while Sagan Tosu also moved up, finishing 13th after a 2-2 draw against 11th-place Oita Trinita at Ekimae Real Estate Stadium.