Ritsu Doan contributed a goal and an assist to help Arminia Bielefeld beat Mainz 2-1 in the German first division on Saturday and end a seven-match league losing streak.

The Japanese midfielder sparked Bielefeld's dominant first-half at SchucoArena, laying off a pass to Manuel Prietl in the 21st minute before the Austrian's shot from the edge of the box ricocheted off a defender and into the net. 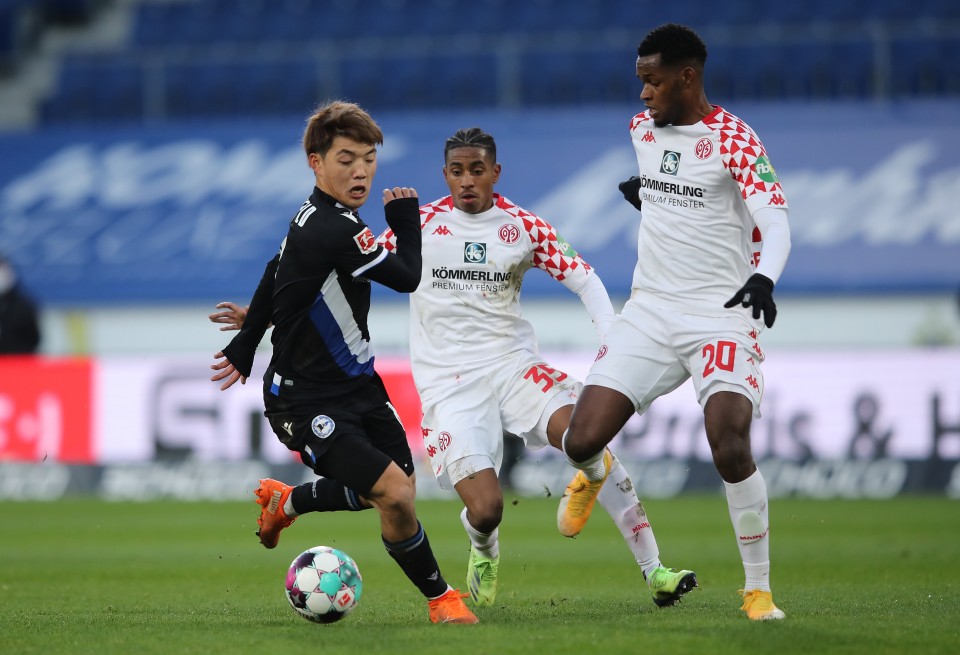 Ritsu Doan (L) of Arminia Bielefeld during a Bundesliga match against Mainz on Dec. 5, 2020. (Getty/Kyodo)

Ten minutes later, Doan employed some skilled footwork to find an opening from outside the box and drilled a low ball into the bottom corner, putting the hosts up 2-0.

"When I got the ball from (Sven) Schipplock and I saw the defense, there was a very small space, but I thought I could make something and tried to shoot," Doan said in the post-match interview.

Kevin Stoeger pulled one back for Mainz in the 82nd minute.

Doan, currently on loan from Dutch side PSV Eindhoven, recorded his second goal of the Bundesliga season to become Bielefeld's top scorer. The 22-year-old also notched his second assist.

In other Bundesliga action, Japan international Daichi Kamada put Eintracht Frankfurt ahead in the ninth minute of their match against Borussia Dortmund before Giovanni Reyna equalized in the 56th to salvage a 1-1 draw.

Kamada pounced on a long ball from Martin Hinteregger and slotted the opener under Dortmund goalkeeper Roman Buerki to net his second goal of the season.