The government's coronavirus panel on Friday called for the suspension of a domestic travel subsidy program in parts of the country where medical systems are under strain, although Prime Minister Yoshihide Suga has ruled out suspending the entire scheme.

The panel's recommendation, which applies to regions where the four-tier virus alert is one notch away from the highest level, comes after the northern city of Sapporo and the city of Osaka in western Japan were removed from the controversial "Go To Travel" program late last month. 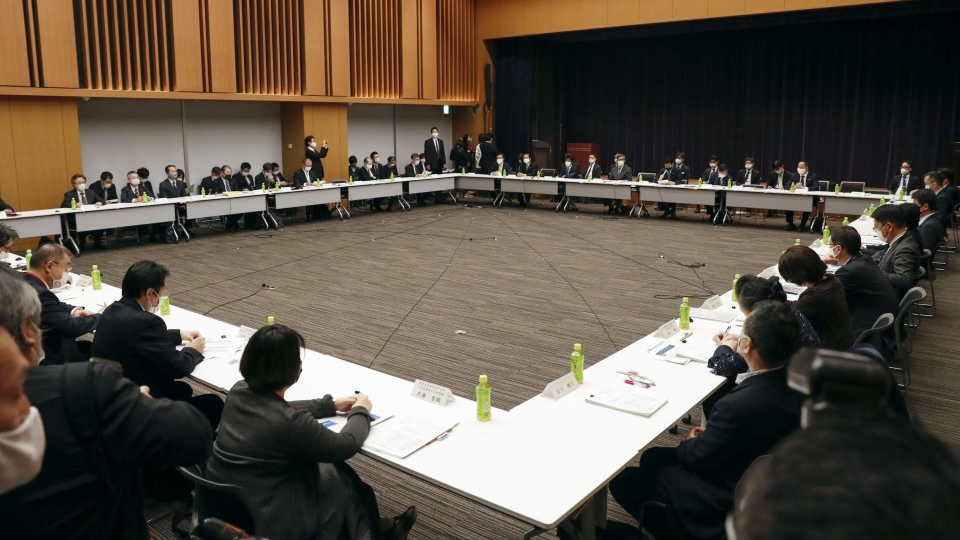 A government subcommittee meeting on coronavirus countermeasures is held in Tokyo on Dec. 11, 2020. (Kyodo) ==Kyodo

Speaking on an online program the same day, Suga said that while the program's suspension is currently not on the cards, Yasutoshi Nishimura, the minister in charge of Japan's virus response, is discussing the panel's recommendations with the relevant heads of local governments.

Following the panel's meeting, its head Shigeru Omi stressed the need to bolster antivirus measures in tier 3 areas, especially in parts where infections are high.

"I want governors to demonstrate leadership and take preemptive measures, and the central government to back them," said Omi as he highlighted a disconnection between the central and local governments in their responses so far.

Tier 3 is a situation in which infections are spreading. On Friday, three sub-levels were created including areas classified as seeing a spread of the virus and areas where infections are running high.

For those two sub-levels, Omi has requested restaurants that serve alcohol to further shorten business hours.

The proposal comes as the country logged 2,798 daily infections Friday, a day after the country confirmed a record 2,973 new cases.

A separate panel of medical experts advising the health ministry on its response said that the government's countermeasures have not been sufficiently effective in reducing the number of patients. 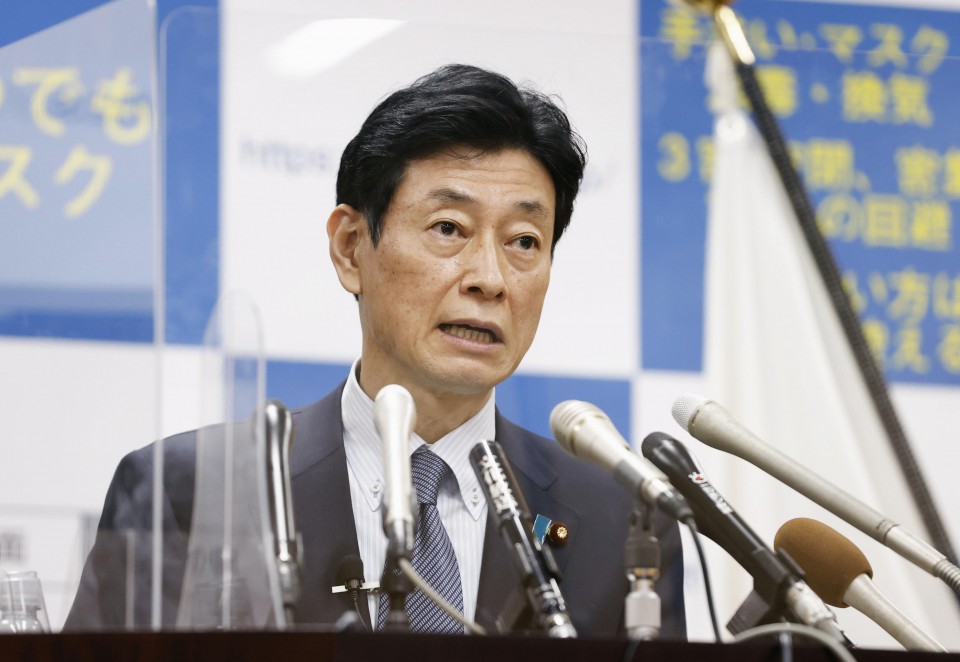 Yasutoshi Nishimura, Japan's minister in charge of coronavirus response, speaks at a press conference after a meeting of the government's subcommittee on coronavirus countermeasures in Tokyo on Dec. 11, 2020. (Kyodo) ==Kyodo

The government plans to continue excluding Sapporo and Osaka from the "Go To Travel" campaign, and to continue requesting elderly people in Tokyo, among others, to refrain from using the travel scheme.

But the government will extend the campaign for another five months through late June from the original end date and for that purpose will spend 311.93 billion yen ($3 billion) from reserve funds earmarked Friday for steps to fight the pandemic.

The panel has also said cases have started to increase in areas that had been free of clusters, including Hiroshima, Kochi and Fukuoka prefectures, and urged the public to refrain from traveling during the year-end holidays.

More than two weeks have passed since Nishimura said on Nov. 25 that "the next three weeks will be critical" in stopping the spread of the virus and protecting the country's medical system.

But the infection situation has not shown signs of improvement across the country. Tokyo, the hardest-hit of the country's 47 prefectures, reported 595 new infections Friday, its second-highest daily figure since the start of the outbreak.

The latest figure, which followed a record 602 logged the previous day, brought the number of total infections confirmed in the capital to 46,124 cases.

The campaign, which effectively shoulders about half of domestic travel expenses, began in July to help the tourism industry weather the impact of the pandemic. But the government is excluding trips to Sapporo and Osaka for three weeks until next Tuesday from the initiative.

Osaka Gov. Hirofumi Yoshimura has said the suspension should be extended beyond Tuesday. The government of the northernmost main island of Hokkaido decided Thursday to request that residents refrain from making unnecessary outings until Dec. 25 in Sapporo and Asahikawa, which have seen a significant strain on their health care systems.

In Asahikawa, Ground Self-Defense Force nurses started working on Wednesday at facilities in the city at the local government's request. Defense Minister Nobuo Kishi said Friday SDF nurses will also be dispatched to Osaka next week.

Osaka Mayor Ichiro Matsui said the city government will pay 10 million yen for each new bed that hospitals can add for COVID-19 patients through the end of the month. 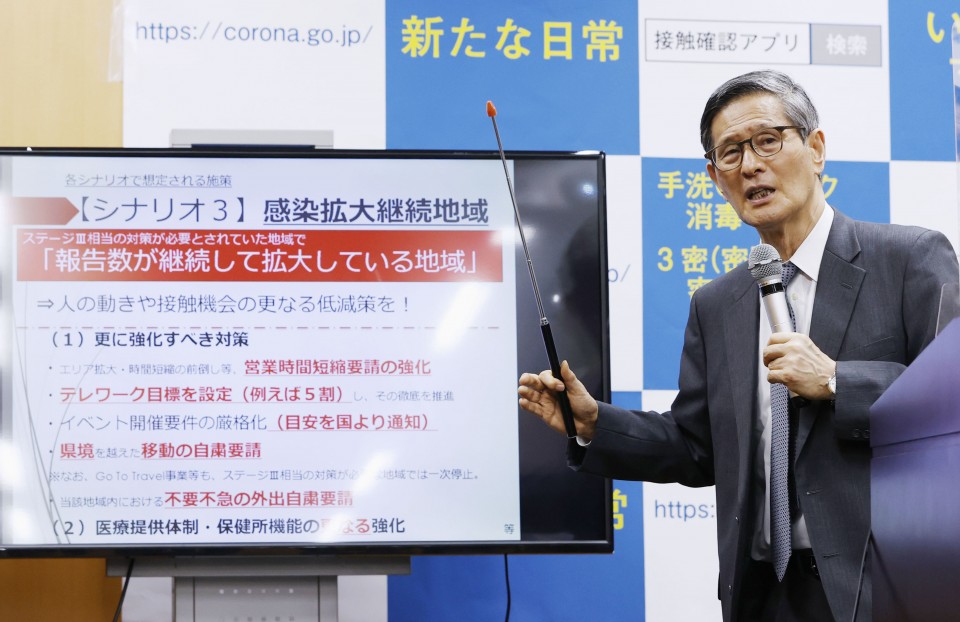 Shigeru Omi, who heads the Japanese government's coronavirus task force, speaks at a press conference after attending a subcommittee meeting on countermeasures against the virus in Tokyo on Dec. 11, 2020. (Kyodo) ==Kyodo 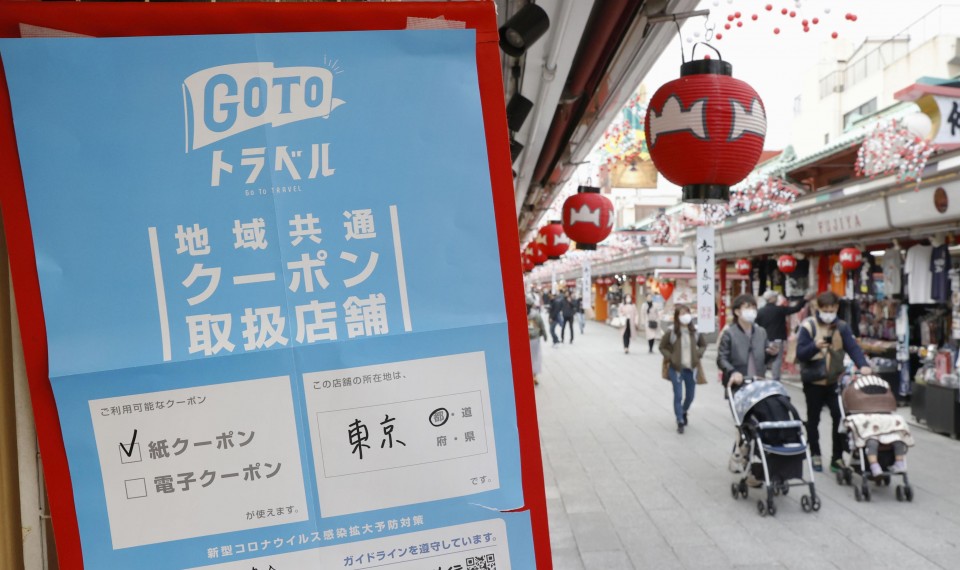 A poster for the Japanese government's "Go To Travel" subsidy program (L) is seen in Tokyo's Asakusa tourist area on Dec. 11, 2020. A government panel called for the suspension of the program the same day amid the continued spread of the novel coronavirus. (Kyodo) ==Kyodo