Workers at tourist spots in Tokyo voiced concern Saturday about the negative impact on their businesses of the government's request for elderly people and those with health issues not to use Japan's domestic travel subsidy campaign amid an uptick in coronavirus cases. 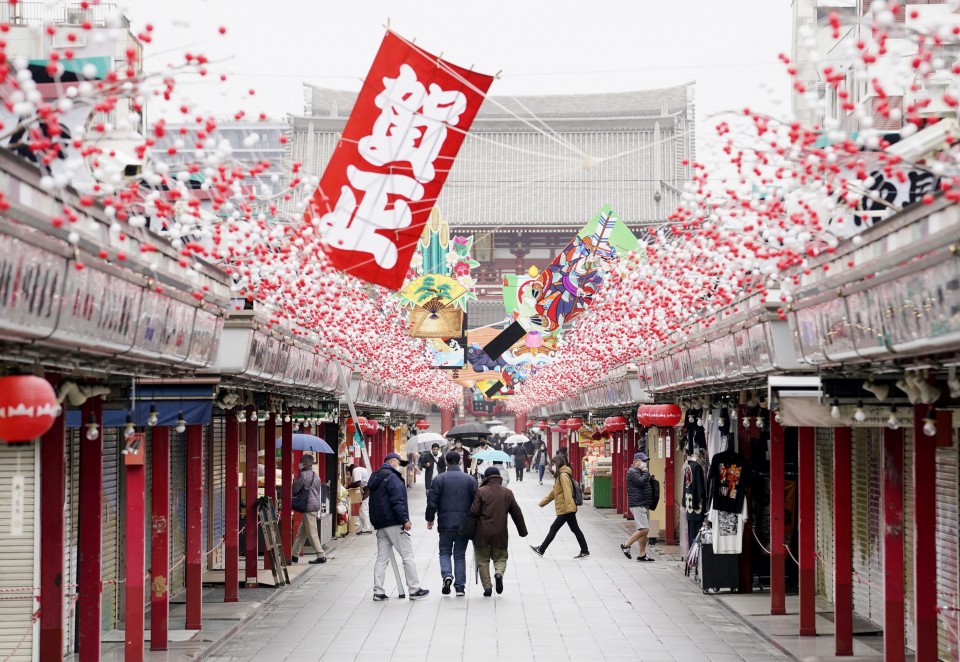 A smaller-than-usual number of visitors are seen in Tokyo's Asakusa area on Dec. 5, 2020. (Kyodo)

Across the country, the number of patients with severe COVID-19 symptoms hit another record at 520, up 15 from Friday, while over 2,400 infections were newly reported including a daily record 584 in Tokyo, according to the health ministry and prefectural governments.

"Tourists had been returning somewhat, but my store cannot avoid the impact of the latest request" from the Tokyo metropolitan and central governments over the use of the tourism promotion program, said Akiko Suzuki, who runs a souvenir shop along Asakusa's Nakamise shopping street, a popular tourism spot, in the capital.

An official at Hato Bus Co., which offers tours around Tokyo, said the company had received inquiries from customers aged 65 and older regarding travel after the requests were made on Tuesday.

The official, speaking on condition of anonymity, said the number of customers had been recovering since Tokyo was added to the "Go To Travel" program in October, but Hato Bus had "received more requests for cancellations after the expansion of the pandemic in November."

Prime Minister Yoshihide Suga's government and Tokyo Gov. Yuriko Koike have asked people aged 65 and older as well as those with underlying health conditions to refrain from making trips to or from the capital using the subsidy program until Dec. 17, given the spike in infections.

The program, launched in July, effectively covers half of a traveler's expenses, including for accommodation, shopping and dining, at travel destinations.

In Osaka, meanwhile, some residents said they had become less cautious about COVID-19, the respiratory disease caused by the novel coronavirus, despite the raising of the city government's alert level in response to increased infections.

"I thought about not coming but ended up coming," said a woman in her 60s who visited a commercial and entertainment area in the western Japan city with her two sisters for lunch and shopping.

"I'm wearing two masks but after exercising self-restraint since the spring, the level of tension (over the virus) has decreased," she said. "I would like to avoid crowds and have fun."

The Osaka prefectural government has asked residents to refrain from nonessential outings from Friday to Dec. 15, raising its virus alert level from "yellow" to "red," meaning "emergency."